I am trying to evaluate the impact of an intervention on a selected outcome variable using interrupted time series data. I have aggregated a five-year data into monthly values to create a data-set 0f 60 time periods.
I have checked for serial correlation, normality, trend, and seasonality using Durbin-Watson test, Augmented Dickey-Fuller test, acf and pacf plots of the preliminary OLS model, ad.test, MannKendall test, kpps test, seasdum tests, etc and found the data to be non-serially correlated and normally distributed.
However, since there are deterministic trend and seasonality, as confirmed by MnnKendall and seasdum tests, I cannot consider it to be stationary. The auto.arima function in R also suggests to take ARIMA(0,1,1) model with first order differencing.
I do not want to make predictions using ARIMA models. I want to fit appropraite regression model to determine the impact of the intervention on the selected outcome. A linear regression model is not appropriate for non-stationary data and corCLASSES of the generalized least square function of R does not include ARIMA models; it includes only corARMA (p,q).
How can I examine the effect of the intervention?

I have setup the data for interrupted time series analysis as follows:

Here is the data:

My answer to you is in two parts. In the first part I set up AUTOBOX to estimate the model that you have pre=specified. The 60x4 DATA MATRIX is partially shown here 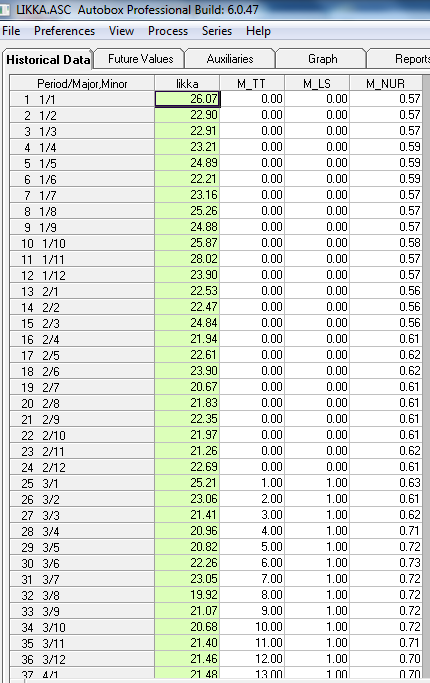 My approach is to simply estimate your model and report the results. You are assuming two intervention variables , one a step and the other a deterministic time trend. The problem with this is that your are not forming the intervention variables analytically ... apparently to eye-balled the original plot of the outcome series and divined the two deterministic predictors 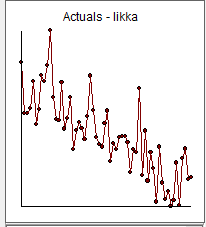 . Here is the plot of the Y series called "LIKKA-outcome"

I estimated your model and did not perform any tests of significance for stepping down NOR did I examine the residuals for purposes of model augmentation. Although you stated that you were not interested in forecasting , the pattern of the forecasts speaks volumes about the model and it's adequacy. In addition the residual plot tells a lot about the sufficiency of the assumed model.

Here is the Actual/Fit and Forecast for the model you specified.

The plot of the residuals (clearly non-random )

The acf of the residuals showing no evidence of structure ( due to the untreated anomalies ! ) 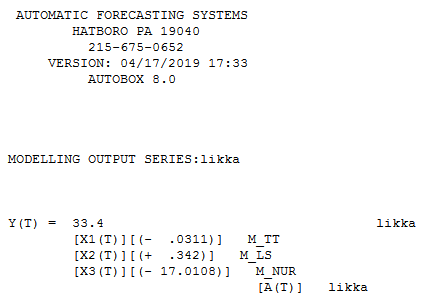 The user-specified two intervention.deterministic series are not-significant while the NUR SERIES ) the user-suggested stochastic series is significant. In summary your two guesses at the form of the latent deterministic structure are of no value.

. I employed the standard paradigm http://www.autobox.com/pdfs/A.pdf to identify/form/revise a Transfer Function Model and obtained the following model 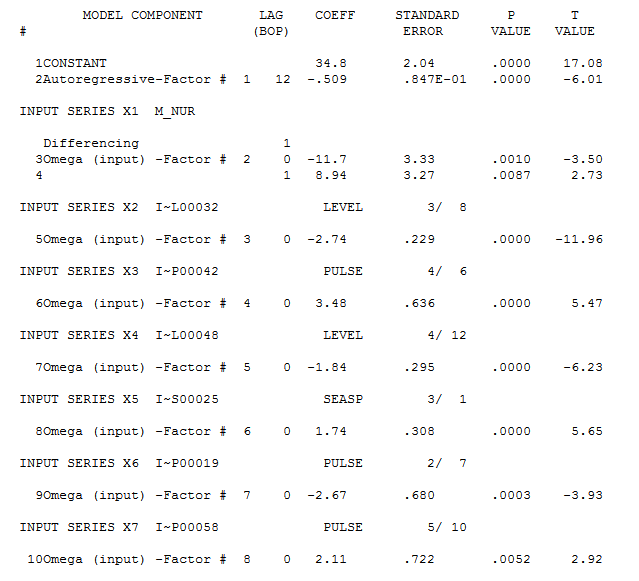 Note that a seasonal ar(12) was found along with a sophisticated memory model for the MUR series along with 2 downwards level shifts and a seasonal pulse at period 25 and 4 one-time anomalies. Following is the Actual and CLeansed graph

The Actual/Fit and Forecast plot is here

. The plot of the residuals is here

The available r stuff doesn't meet your needs BUT there is an R VERSION of the software that I used (AUTOBOX) which does.

Not the answer you're looking for? Browse other questions tagged r time-series arima stationarity generalized-least-squares or ask your own question.