So I'm looking for a good way to generate random numbers that are more evenly distributed than uniform randoms.

Use case example: say I'm doing a computer game, and I want to place treasure randomly on a map (not caring about any other thing). I don't want the treasure to be all in one place, it should be all over the map. With uniform randoms, if I place, say, 10 objects, the chances are not that low that there are 5 or so really close to each other. This may give one player an advantage over another. Think of minesweeper, chances (albeit low, if there are enough mines) are that you are really lucky and win with a single click.

Is there any better way to get this extra evenness into the uniform? It probably only works for batch randoms (when drawing a single random, I obviously have to consider the whole range). In particular, I can shuffle the records again afterwards (so it's not the first four from the first third).

How about doing it incrementally? So the first is on U[0;1], then two from each halves, one from each third, one from each fourth? Has this been investigated, and how good is it? I might have to be careful to use different generators for x and y to not get them correlated (the first xy would always be in the bottom half, the second in the left half and bottom third, the third in center third and top third... so at least some random bin permutation is also needed. and in the long run, it will be too even, I guess.

Yes, there are many ways to produce a sequence of numbers that are more evenly distributed than random uniforms. In fact, there is a whole field dedicated to this question; it is the backbone of quasi-Monte Carlo (QMC). Below is a brief tour of the absolute basics.

The quantity $D_n$ is often called the discrepancy or extreme discrepancy of the set of points $(x_i)$. Intuitively, we find the "worst" rectangle $R$ where the proportion of points deviates the most from what we would expect under perfect uniformity.

Lemma: $D_n^\star \leq D_n \leq 2^d D_n^\star$ for all $n$, $d$.
Proof. The left hand bound is obvious since $\mathcal A \subset \mathcal R$. The right-hand bound follows because every $R \in \mathcal R$ can be composed via unions, intersections and complements of no more than $2^d$ anchored rectangles (i.e., in $\mathcal A$).

Thus, we see that $D_n$ and $D_n^\star$ are equivalent in the sense that if one is small as $n$ grows, the other will be too. Here is a (cartoon) picture showing candidate rectangles for each discrepancy. 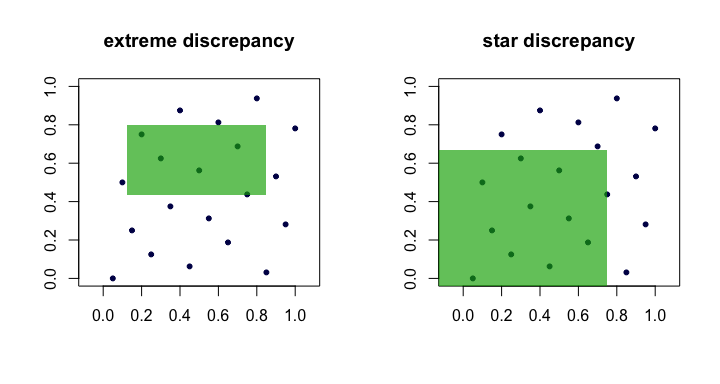 Halton sequences. Among the most popular of classical low-discrepancy sequences, these are extensions of the van der Corput sequence to multiple dimensions. Let $p_j$ be the $j$th smallest prime. Then, the $i$th point $x_i$ of the $d$-dimensional Halton sequence is $$ x_i = (\rinv_{p_1}(i), \rinv_{p_2}(i),\ldots,\rinv_{p_d}(i)) \>. $$ For low $d$ these work quite well, but have problems in higher dimensions.

Halton sequences satisfy $D_n^\star = O(n^{-1} (\log n)^d)$. They are also nice because they are extensible in that the construction of the points does not depend on an a priori choice of the length of the sequence $n$.

Here is an example of the Halton and Hammersley sequences in two dimensions. 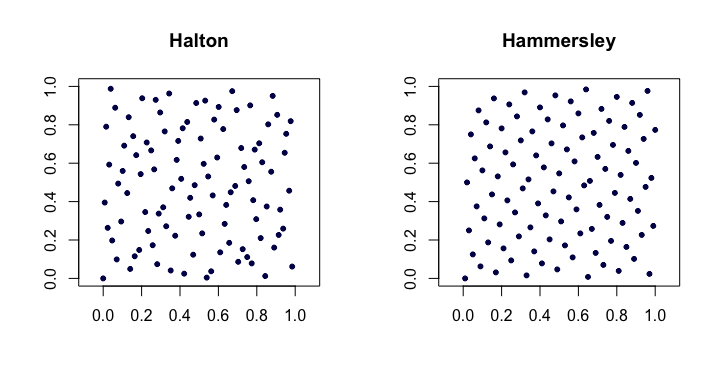 Faure-permuted Halton sequences. A special set of permutations (fixed as a function of $i$) can be applied to the digit expansion $a_k$ for each $i$ when producing the Halton sequence. This helps remedy (to some degree) the problems alluded to in higher dimensions. Each of the permutations has the interesting property of keeping $0$ and $b-1$ as fixed points. 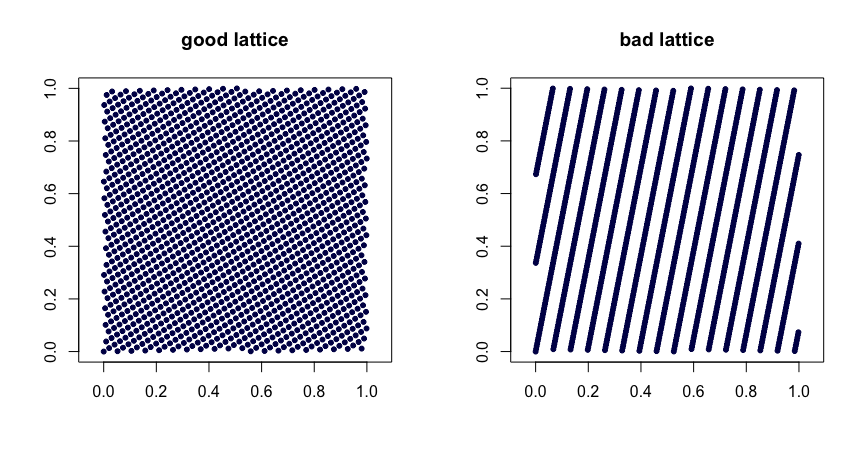 $(t,m,s)$ nets. $(t,m,s)$ nets in base $b$ are sets of points such that every rectangle of volume $b^{t-m}$ in $[0,1]^s$ contains $b^t$ points. This is a strong form of uniformity. Small $t$ is your friend, in this case. Halton, Sobol' and Faure sequences are examples of $(t,m,s)$ nets. These lend themselves nicely to randomization via scrambling. Random scrambling (done right) of a $(t,m,s)$ net yields another $(t,m,s)$ net. The MinT project keeps a collection of such sequences.

Here is an example with the blue dots being the original points and the red dots being the rotated ones with lines connecting them (and shown wrapped around, where appropriate). 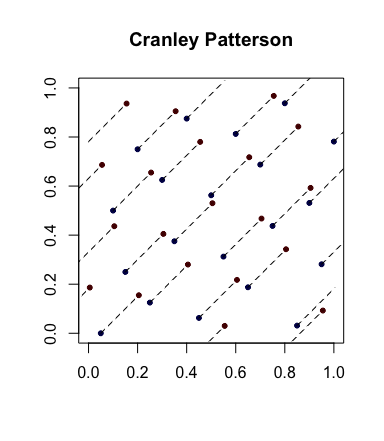 The Niederreiter (1992) monograph and the Fang and Wang (1994) text are places to go for further exploration.

One way to do this would be to generate uniform random numbers, then test for "closeness" using any method you like and then delete random items that are too close to others and choose another set of random uniforms to make up for them.

Would such a distribution pass every test of uniformity? I sure hope not! It's no longer uniformly distributed, it is now some other distribution.

One uninuitive aspect of probability is that chance is clumpy. There are more runs in random data than people think there will be. I think Tversky did some research on this (he researched so much, though, that it's hard to remember).

This is known as a "hard-core" poisson point process - so named by Brian Ripley in the 1970s; i.e. you want it to be random, but you don't want any points to be too close together. The "hard-core" can be imagined as a buffer zone around which other points cannot intrude.

Imagine you're recording the position of some cars in a city - but you're only recording the point at the nominal centre of the car. While they're on the streets no two point pairs can come close together because the points are protect by the "hard-core" of the bodywork - we'll ignore the potential super-position in multi-storey car parks :-)

There are procedures for generating such point processes - one way is just to generate points uniformly and then remove any that are too close together!

For some detail on such processes, refer for example to this

With respect to batch generation in advance, I would generate a large number of sets of pseudorandom variates, and then test them with a test such as the Kolmogorov-Smirnov test. You will want to select the set that has the highest p-value (i.e., $p \approx 1$ is ideal). Note that this will be slow, but as $N$ gets larger it probably becomes less necessary.

With respect to incremental generation, you essentially are looking for a series with a moderately negative autocorrelation. I'm not sure what the best way to do that would be, since I have very limited experience with time-series, but I suspect there are existing algorithms for this.

With respect to a test for "too even", any test for whether a sample follows a specific distribution (such as the KS noted above) will do, you just want to check if $p > (1-\alpha)$, rather than the standard approach. I wrote about an example of this alternative approach here: chi-squared always a one-sided test.

One easy way to generate such vectors is to do Gibbs sampling.

64
Is chi-squared always a one-sided test?
13
Methods of initializing K-means clustering
16
Scrambling and correlation in low discrepancy sequences (Halton/Sobol)
4
Do the data from these two different samplings follow the same distribution?
1
How to efficiently bias future samples?
1
Good measure of spread around unknown number of clusters?