Estimating the population median from a kernel density estimator

Essentially, I'm just summing up the areas of trapezoids under the curve until I reach a cumulative sum of $0.5$.

How can I do something similar, but for the mean/expected value of the density function?

Here are some experiments using the default kernel density estimator in R. It is designed in a way that makes estimation of the median practical for reasonably large samples.

Exploring the output from the KDE: The function density(v) produces two vectors: one with evenly spaced $x$-values and the other with corresponding heights ($y$-values).

Here is a density histogram of the sample, along with the KDE.

It is convenient to give names to the two vectors. Also, we verify that the points along the horizontal grid are equally spaced (we call the common distance wd), which makes numerical integration easy, allowing us to see that the area under the KDE-curve is essentially $1.$

Sample, population and KDE means: The sample mean $(49.68)$ is computed from the data, the population mean $(50)$ by formula from the distribution parameters, and the KDE-mean $(49.73)$ by numerical integration using the common width wd, heights ht, and $x$-values from the KDE.

Population and KDE-modes: By formula the population mode is $4/.1 = 40.$ The modal interval of the histogram is $(40,50].$ And we find the maximum of the KDE curve to be about $43.96.$ (With a different seed, the sample might have produced a KDE-mode that does not fall in the modal histogram interval.)

Empirical, population, and KDE CDFs: The ECDF of a sample of size $n$ has jumps of size $1/n$ at sorted sample values (with jumps of $k/n$ in discrete or rounded data $k$ observations tied at the same value). 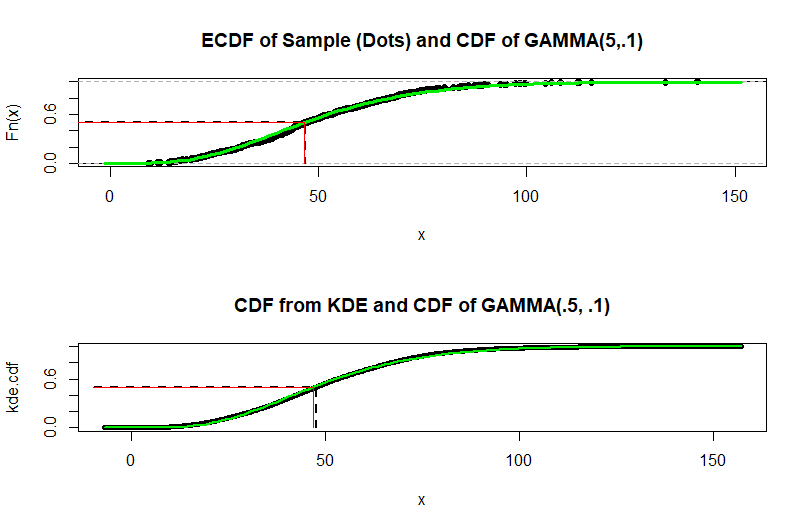 Notes: (1) For your KDE, you need to determine whether the horizontal grid points are equally spaced as in this example with the default KDE in R. If not you will have to use variable rectangle widths in numerical integration. (2) I did not restrict the KDE to positive values. It is a good idea to restrict the KDE to match the support of the distribution involved. (3) Notice that the summaries of $x$ and $y$-values given in the first section of this Answer are not directly applicable to estimating population mean, median, and mode. (4) Disclaimer: Much of what I know about the particular details of R's default KDE was learned by doing this investigation. People on this site who know more about the design of the density function in R, may have important comments to add.

Not the answer you're looking for? Browse other questions tagged expected-value kernel-smoothing mean numerical-integration or ask your own question.