This question is motivated by the discussion of this earlier question.

I have two samples $X$ and $Y$, where both samples have $n$ elements. Both samples represent optimal solutions returned from two different stochastic optimisation solvers on the same optimisation problem: results from one solver are in sample $X$, and results from the other solver are in sample $Y$. Each element in the samples are independent of each other, and both samples are independent of each other.

I am wondering what the appropriate method is to compare samples $X$ and $Y$ to detect if one solver tends to provide better optimal solutions than the other solver for the particular optimisation problem.

I have two ideas:

For either idea, we assume that one solver is better than the other solver if zero does not fall within that idea's estimated confidence interval of the relevant sample statistic.

In the first idea, I think the algorithm would be:

For the second idea, I think the algorithm (rewritten from this question) would be:

I believe that idea 1 and idea 2 are nonparametric bootstrap approaches which are analogous to the paired samples t-test and the independent samples t-test respectively. I think that the second idea is the more appropriate idea, since I think the first idea assumes the specific pairings of elements between $X$ and $Y$ are important when they are in fact not important.

Of course, my post assumes that looking at means is the most sensible way of comparing results; I am open to discussion over other point statistics or interval statistics that more knowledgable people may be aware of.

Am I right in my thinking that the second idea is the appropriate way of comparing the optimal solutions provided by these two solvers on the same optimisation problem? 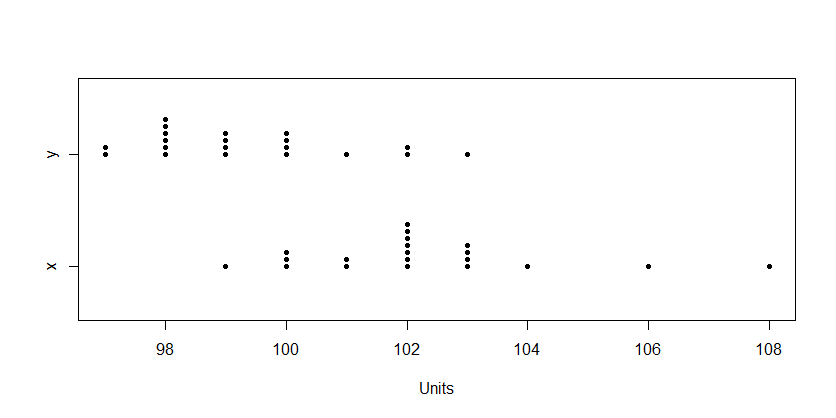 The 95% CI produced by the two-sample Wilcoxon procedure is $(2.0, 4.0),$ but it is not clear how successfully this procedure adjusted for the many ties in the data rounded to integers.

Nonparametric bootstrap CIs: There are very many styles of nonparametric bootstrapping, each with at least a few enthusiastic advocates. (It seems your first method anticipates equal sample sizes from the two groups, and may be more appropriate for paired data than for two independent samples.)

I prefer what I view as a modification of your second method, mainly because I can see a clear rationale for the process, as described below.

For our data, this bootstrap procedure is shown below in R, where we use .re for $*.$ Also, we use objects with a's to indicate the various means. (The 'for-loop' structure is not optimally efficient in R, but it is easily understood by those unfamiliar with R, and the short lines fit nicely on this page.)

The resulting 95% nonparametric bootstrap CI is $(1.80, 4.05),$ which does not include $0.$ So we can reject the null hypothesis that the two distributions have equal means at the 5% level.

Notes: (1) The bootstrap CI is a little shorter than the t CI given earlier. In effect, using a t procedure implies nearly normal data, with possible values on the real line. The bootstrap procedure 'has no clue' that any values can be outside the interval $[97, 108].$

(2) An equivalent procedure would be to get the bootstrap distribution of $\bar D^*.$ Then at the end use $2\bar D_{obs} - \bar D^* =\bar D_{obs} - (\bar D^* - \delta^*) $ (since, by definition, $\delta^* = \bar D_{obs}).$ [This is the version shown by John Rice in his math stat book. A pedagogical disadvantage of this is that students ask where the "2" comes from.] In either version this method is said to provide bias protection against asymmetrical bootstrap distributions.

Permutation test. If your main objective is to test the null hypothesis that the two 'solvers' are the same, you might do a nonparametric permutation test instead of a bootstrap confidence interval.

Because the data are not normal this test may not be appropriate, but we can do a nonparametric test with the metric $d = \bar X - \bar Y,$ the observed value of which is $d_{\text{obs}} = 2.95.$ If the null hypothesis is true, then it should not matter which 20 of the 40 observations were assigned to group 1. There are ${40 \choose 20} = 137,846,528,820$ possible permuted assignments. Not all of them will have different values of $d,$ partly because of the ties among the observations. Without extra parameters, the R code sample(g) randomly permutes the 1's and 2's in g. Results of four such permutations of the data between groups are shown below: 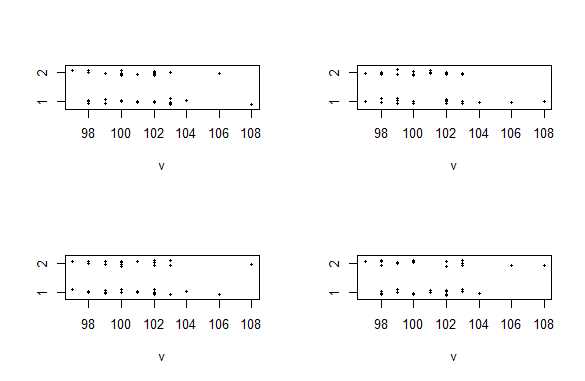 The P-value $\approx 0.00001$ is the proportion of simulated values of $d$ that exceed $d_{\text{obs}}.$ The simulated permutation distribution is shown below. 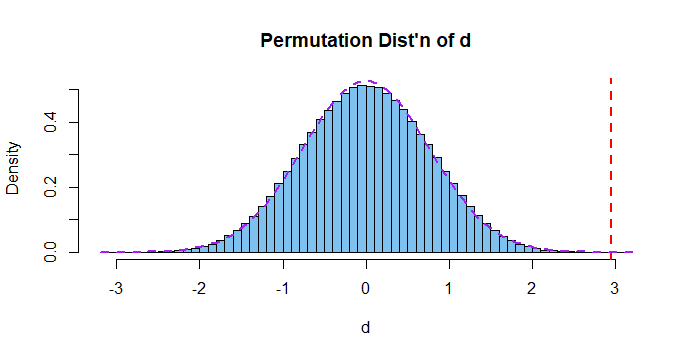 Among the $B = 10^6$ values of $d$ simulated, there were only 64 uniquely different values. The resulting discrete simulated permutation distribution is roughly normally distributed; the best-fitting normal density is shown with dashes.

Not the answer you're looking for? Browse other questions tagged hypothesis-testing statistical-significance nonparametric bootstrap or ask your own question.