I have a dependent variable, which is a multinomial distribution resulting from positive and negative correlation coefficients. This is a study from the field of Dendrochronology. 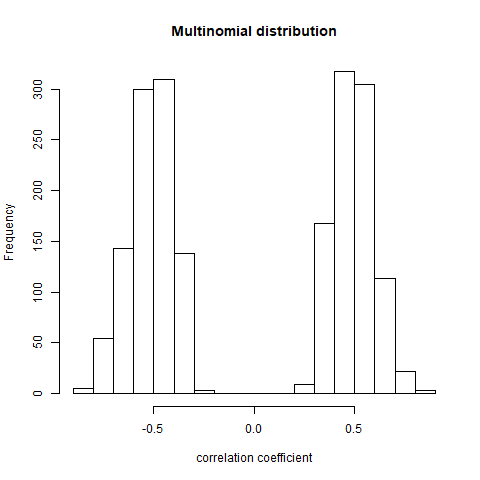 Those correlation coefficients represent the relationships between tree-growths (i.e. standardized tree-ring widths) and sums of precipitation. For example: There is tree-ring width chronology (TRWi from site 1) and there are summer precipitation in mm (for site 1). An example table is below.

Calculated correlation coefficient is between TRWi and Precipitation variable. Longitude, latitude and altitude are constants for this specific site. Now, there are approximately 1000 different sites and in the first step, correlation coefficients are calculated for each site. At some sites, trees respond positively to higher precipitation sums, while for others this relationship is negative. After 1000 calculations, regression table looks like one below.

Now, it is time for step 2 and I would like to model this variable as a function of longitudes, latitudes and altitudes.

What model would you suggest?

However, if your main interest lies in how the relation between tree ring width and precipation changes with location and height I think you are better off using a linear model with interaction effects. You are then effectively estimating the equation:

If the relation between amount of rainfall and growth changes with say altitude that would be picked up by $\beta_5$.

Not the answer you're looking for? Browse other questions tagged r regression multinomial-distribution or ask your own question.