This is not the first time I have performed stratified analyses based on logistic regressions, but I have never before been confronted with this situation.

I wonder how it is possible that the OR in the overall population is larger than either of the two and whether this could indicate a problem in the model (e. g. too high collinearity between obesity and my outcome).

This is not that much unusual and in fact it can be even the case that im the overall sample the odds ratio is >1, let's say OR= 3.98 as in your case, but in both subgroups the odds ratio is even less than 1! This sounds impossible at first glance but the following picture from wikipedia visualizes this effect which is called the simpson's paradox: 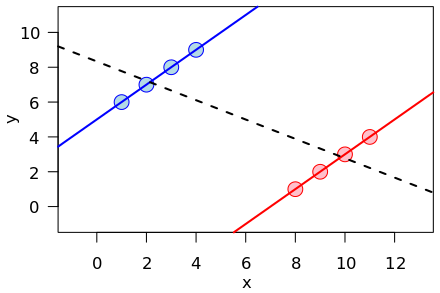 In this picture the black dotted line shows for the whole sample a negative effect while the two subgroups have positive effects as indicated by the blue and the red line. The same paradox effect can occure with odds ratios.

So what I am saying is that there are situations where the results from the subgroups seem not to be compatible with the whole sample as it is in your data or the subgroups even seem to contradict the whole sample as in the examples in the links I provided. To my knowledge there is no simple universal rule how to interpret such findings but you have to consider theoretical plausible mechanisms (as you can see in the literature). I can also suggest reading this paper that shows the logic behind th simpson's, the lord's paradox and the suppression effect which the authors all together call the reverse effect.

Not the answer you're looking for? Browse other questions tagged logistic odds-ratio stratification or ask your own question.

3
Control variables and other independent variables