In the case of standard nonnegative least squares ridge regression I understand that this can be fit very easily by row augmenting the original covariate matrix X with a diagonal p x p matrix with sqrt(lambdas) along the diagonal and augmenting the outcome vector y with p zeros and then doing a nonnegative least squares (nnls) regression using these augmented matrices/vectors.

1) Does this recipe also work for nonnegative identity-link Poisson models, the idea being that I would then simply change from an nnls fit to a nnpois fit (fit using an EM algorithm, using the addreg package). Would anybody be able to prove analytically that this would indeed be equivalent to optimizing the ridge penalized nonnegative identity-link Poisson likelihood?

2) Would a recipe like this also work to fit nonnegative least square or nonnegative Poisson models with a fused ridge penalty, where the row augmented part of the covariate matrix would then no longer be diag(sqrt(lambda),p)) as in regular ridge regression, but sqrt(lambda)*(t(D) %*% D) with D=diff(diag(p), 1). If I try this, this works if I don't impose nonnegativity constraints (e.g. with a regular lm.fit), but it fails as soon as I plug this into either nnls or nnpois, as they only take covariate matrices with all positive elements. Is there an easy fix for this?

Regarding question 1) I did some quick numerical tests and I do indeed get a very similar results based on using nnpois with a covariate matrix row augmented with diag(sqrt(lambda),p)) and based on directly optimizing the penalized ML objective, but I am on the lookout for an analytical proof that this is a correct thing to do (or if it is not exact, that it would at least be a very close approximation of the actual penalized ML objective)... Any thoughts?

Numerical example, here in the context of trying to estimate a peak shape function from a superposition of blurred impulses with known pulse locations but unknown blur kernel, and where the noise on the measured superposition of the blurred peaks would be Poisson: 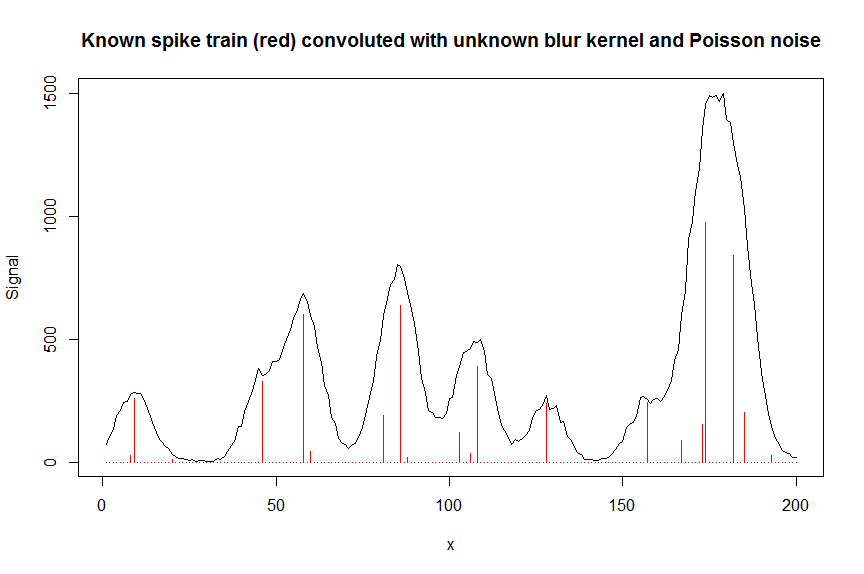 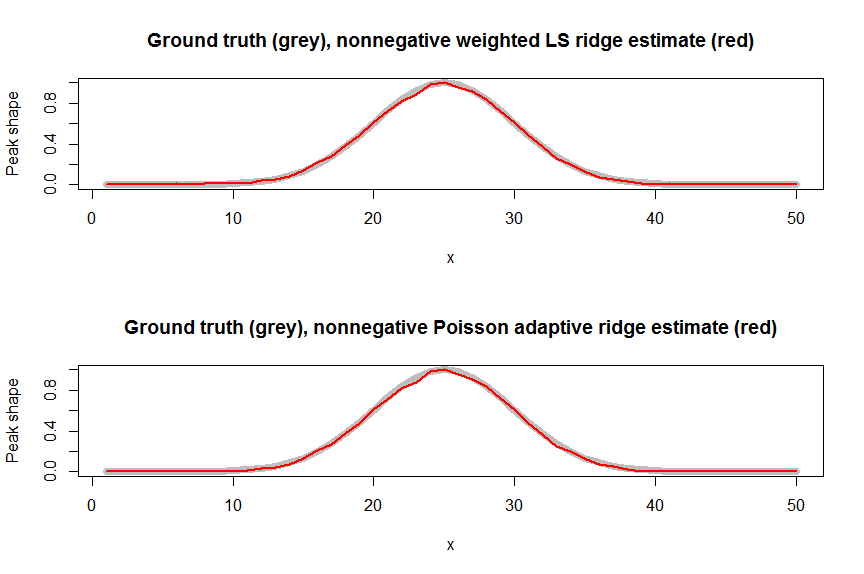 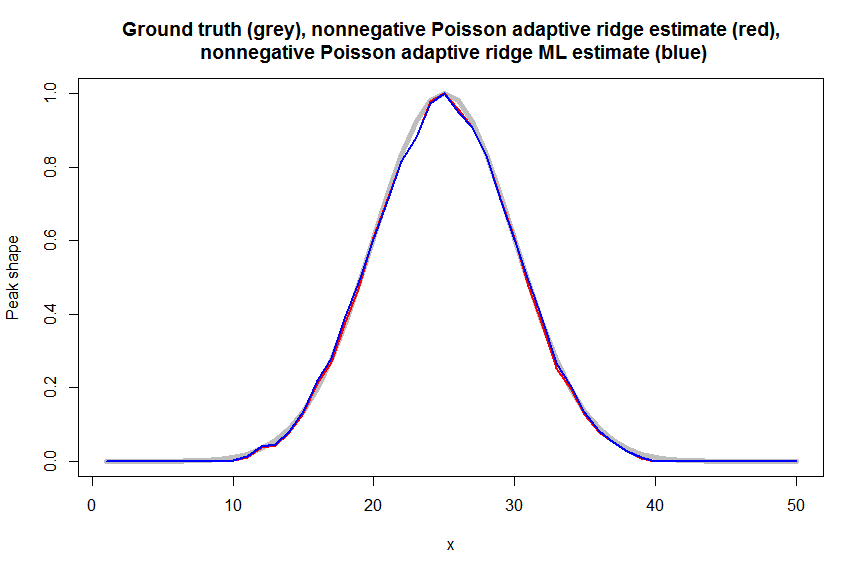 EDIT: Just figured that in the end it may be exact - reason is that you can readily fit nonnegative GLMs using iteratively reweighted nonnegative least squares (just like the regular IRLS algo but substituting the regular solve / lm.wfit by weighted nnls) and for identity link you just have to regress yhat on your covariate matrix and the weights W are just 1/expected variance (ie in the IRLS algo, http://bwlewis.github.io/GLM/, z=yhat and W=1/expected variance=1/yhat for Poisson noise).

So given that we are just doing weighted (nonnegative) least squares anyway, adding a ridge penalty in each iteration via row augmentation is no problem (the row augmented part would also stay the same in each iteration and the Ws would be taken to be one for the augmented part) and works out to be exact. As initialization for the variance weights one would take 1/(y+eps) (R uses eps=0.1 in the glm.fit source code in fact) and this also gives estimates that are already be really close to the final estimate in the very first iteration (which is why my weighted nonnegative least squares estimate above works so well - it corresponds to 1 iteration of iteratively reweighted nnls to fit a nonnegative identity link Poisson GLM).