What test to use when a chi-squared assumption is violated but my contingency table only has one row?

I have some data of lizard counts near rock piles of different types that I'm trying to analyse.

However, one of the expected counts is below 5 (expected counts are 11.25, 11.25, and 4.5, based on the proportions of different rock piles at the site). Does this violate the assumption of the chi-squared test? If so, what test can I use (I believe Fisher's exact test doesn't work when there's only one row?)

The "expected count >5" is not an assumption of the test. It's a rough rule of thumb relating to the adequacy of the chi-squared approximation to the distribution of the test statistic.

An expected value of 4.5 shouldn't be all that big of a problem. However we can check how much effect it has, using simulation.

I've just done a large simulation for your specific sample size and null-probabilities; the relationship between the true significance level and the chisquared approximation is pretty good for significance levels below 20%: 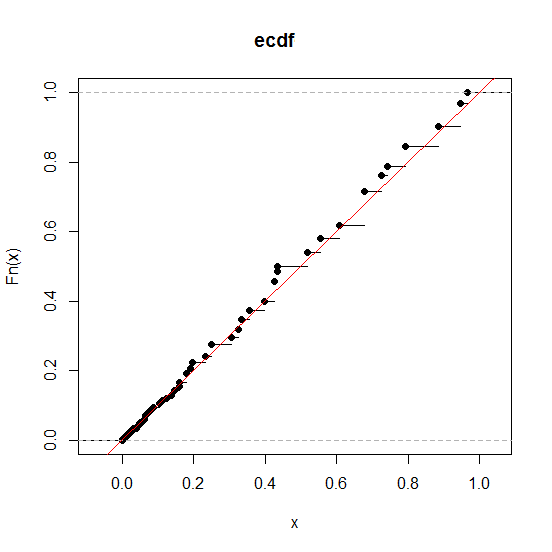 The above plot shows the empirical cdf of simulated p-values under $H_0$ for population proportions of $\frac{5}{12},\frac{5}{12},\frac{2}{12}$ and $n=27$. Those "wobbles" away from the y=x line in the top 3/4 of the plot are not random, but reflect the actual distribution (there is randomness in the plot but it's mostly too small to discern in that plot; repeat simulations look the same).

In addition we can compute from the same simulations that the true significance level for a nominal 5% chi-squared test is about 4.7% which is slightly conservative (this is on 300,000 simulations). The chi-squared approximation seems reasonably adequate to me.

However, you can perform an 'exact' test (to any desired degree of accuracy on the estimated significance level) for any given statistic (such as the Pearson chi-squared statistic) by using the simulated distribution under the null. Indeed a perfectly-exact test could be obtained by enumeration (at least in the upper tail), but involves more effort.

In some cases the G-test for multinomial goodness of fit (which is also asymptotically chi-squared) has a slightly better approximation to the chi-squared distribution in small samples. We can also check that, but in this case the approximation appears to be slightly worse in the region of 5%. An exact test based on simulation could be performed for this case as well.

A variety of other choices of test are possible and for any given test statistic exact tests may be constructed if need be.

Not the answer you're looking for? Browse other questions tagged chi-squared fishers-exact or ask your own question.