I have two distributions, that look like the following: 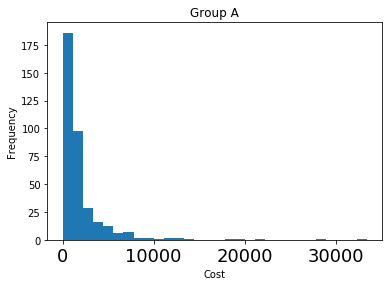 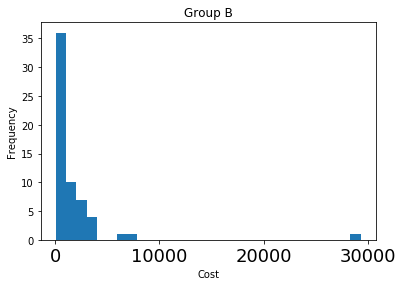 They appear to be exponential and have different sample sizes (369 vs 60). I would like to do some hypothesis testing. I know that I can use the Kolmogorov–Smirnov test to check if they come from the same distribution. However, I'd like to know, beyond just being from different distributions, does Group A tend to spend MORE than Group B?

A Wilcoxon-Mann-Whitney is entirely suitable for testing equality of the parameter of (one-parameter) exponential distributions.

For example, under the null (implying iid exponential variates), the significance level will have exactly the properties as should be expected with a Wilcoxon-Mann-Whitney test at whichever sample sizes you have (naturally not all significance levels will be available with a non-randomized test but it will be the same issue as it would be in the situations you're more used to).

Power will be reasonable*, but obviously at any exact distributional model, below the power of the most powerful test for that distribution. [You can get a uniformly most powerful one-tailed test via the Karlin-Rubin theorem, which would boil down to a one-tailed F test based on a ratio of the sample means. An equal-area two-tailed F test will not be UMP unbiased but will perform very well in large samples.]

You correctly note that the alternative in the case of an exponential is not a shift alternative but that is not of any particular consequence, other than if you try to use the test to produce a confidence interval for a location shift, it won't be useful when you're not dealing with a location shift.

However, there's a neat shortcut if you have software that will give an interval for a shift, which is to simply take logs, get the interval for the shift on the log scale and exponentiate its endpoints; that should be identical to the exact interval by inverting the scale shift on the original data.

* Indeed, a quick simulation at a few sample sizes suggests that the one-tailed Wilcoxon-Mann-Whitney has fairly reasonable small sample power compared to the likelihood ratio test conducted at the same significance level as that of the WMW, for exponential populations. (Not as good relative efficiency as you get with the normal, but it looks reasonable.)

It actually looks to me like you have heavier right tails than the exponential would suggest; it may be that the WMW has better power in that situation than using a UMP test for the exponential when actually sampling some more-skew populations.

Not the answer you're looking for? Browse other questions tagged hypothesis-testing distributions wilcoxon-mann-whitney-test kolmogorov-smirnov-test exponential-distribution or ask your own question.