We have a study involving 10,000 patients, 5,000 of them treated with drug A and 5,000 with drug B. We want to know if drug A is more effective than B. The median time to event (death) after treatment with drug A is 1,000 days and for drug B it is 2,000 days. Suppose we wish to subsample 100 patients receiving either treatment (200 total) from this larger sample to test the same hypothesis.

There are two proposed subsampling strategies:

For the two cases above, which are the appropriate analytical tools to consider? Which has more power?

cox-model biostatistics clinical-trials
Share
Improve this question
edited May 15 '19 at 17:37

These scenarios should be remarkable similar. In survival analysis, it is helpful to think about the cumulative observation time as informative regarding the precision and standard errors. For instance, in a sample where 200 die, if another 5,000 are observed who do not die, they can contribute to the precision of the estimates of HRs. Deaths remain the main (but not sole) driver of power. In Cox models this is made explicit by the risk set.

Considering that approximately half the sample lives past 1,500 days it's perhaps not a coincidence that in scenario 2 you subsample in an arbitrary interval around the median survival for the two balanced groups (e.g. $\pm 200$). That does not mean that, on average, the number of person-days of observation will or will not be the sample in the two scenarios. The more powerful sampling strategy will be the one which has a highest person years of observation period, provided all the appropriate modeling assumptions are met.

Suppose we consider person-days of observation for one treatment group. The actual distribution of event times will determine whether the subsample of events falling in a symmetric interval around the median actually comprises a greater survival time. As an example, consider survival times exponentially distributed.

so the unconditional sample includes more persons having longer event time follow-up, and hence would be slightly more powerful.

Scenario 2 can't in general be counted on to demonstrate a survival difference between drugs A and B.

Yes, the above example might be extreme. You don't, however, want study design to depend on untestable assumptions about the shapes of survival curves, hidden assumptions that underlie the proposal of sampling scenario 2.

With scenario 1 you directly get information about the shape of the survival curves. That would be important for testing the proportional-hazards hypothesis that underlies the Cox regression proposed in an earlier version of this question. (Note that for a simple 2-treatment comparison you could use a log-rank test in scenario 1 and avoid such assumptions.)

Scenario 1 also gets your results faster. This calculator for survival studies with 2 equal groups at the start shows that, under your assumptions (200 patients in total with data, all starting at day 0, 1000-day median time to failure with drug A, a hazard ratio of 2) you will have 80% power to detect (at p < 0.05, log-rank test) a survival difference after 850 days of follow up. There will only be 46 deaths total at 850 days. You will barely have started collecting data under Scenario 2 at that time.

It's frankly hard to think of a situation in which scenario 2 would be preferable, although that might just indicate the limits of my imagination. For example, under your hypotheses with exponential survival curves, I calculate that 59% of the deaths between 800 and 1200 days would be with drug A, while 51% between 1800 and 2200 would still be with drug A. If you wanted, say, to compare those proportions between the 2 time intervals as a test of differences in survival, Russ Lenth's power calculator indicates that you would have less than 20% power to detect that difference in A/B proportions with only 100 deaths sampled within each time interval.

If you would like to explore different sampling times like sampling scenario 2, the following plot shows the fraction of all deaths that occur in patients who took drug B, as a function time into the study, within 400-day windows, with exponential survival times. 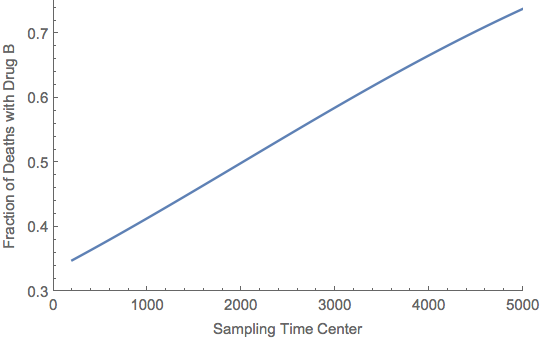 Remember that scenario 1 gets you useful results by 850 days. That takes advantage of the low proportion of drug B deaths at early times so it's easiest and fastest to see differences between A and B at early times. As the sampling time gets later the difference in deaths between drugs A and B in the types of time windows you propose gets smaller (making it harder to detect B/A differences) until they are about equal at 2000 days, after which increasingly more deaths are associated with drug B and B/A differences become easier to detect. Again, it's hard to see what that type of sampling approach would provide over the standard scenario, scenario 1.

Not the answer you're looking for? Browse other questions tagged cox-model biostatistics clinical-trials or ask your own question.