I am having a conceptual problem, of not being able to grasp whether my data is paired or unpaired. I have to test for the mean and median differences between two sets of data: SBP and GICS (see picture). The sample population is 1,500 firms for all years from 2004 to 2018. The firms are not necessarily the same, i.e. the 1,500 firms in 2005 are slightly different ones in 2006. From this population, both the SBP and GICS creates groupings of 10 from the 1,500 firms - but do it differently.

My initial thought was that the SBP and GICS were unpaired; i.e. there was no "before vs. after" medical treatment effect, since both "systems" does the exact same thing: to create groupings of 10. What matters is, how they select the 10 firms for each group. Can someone help?

I was left wondering this, when I tried to run the tests in R. The sample median and mean values of the SBP and GICS are the following: 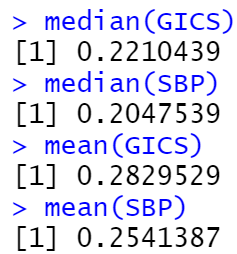 gives me a pairwise difference of 1.9%, where I am left wondering, why I can be in a situation where the pseudo median (population estimator) of a Wilcoxon signed rank test, can be larger than the simple differences between sample medians? I am performing a paired signed rank test, since my data is dependent.

I have uploaded my dataset here: Dataset as a .csv file.

Can someone help my understanding?

EDIT: Running the Wilcoxon test as paired, i.e. pair=TRUE, gives me a pseudo median of 1.513%.

If you are actually comparing the outcomes of multiple groupings, over multiple years, then that would make things more complicated.

Also, an assumption of both the Student's t-test and Wilcoxon test is that your data points are independent. If this assumption is violated, then you cannot rely on the results. If you have the same firms in your dataset in different years, then I would argue that your data points are not in fact fully independent, and you should address this first before carrying out your test.

Not the answer you're looking for? Browse other questions tagged hypothesis-testing t-test paired-data wilcoxon-signed-rank or ask your own question.