mathematical-statistics asymptotics
Share
Improve this question
asked May 6 '19 at 18:45

Rather than get too involved with the analysis, let me present one of the simpler examples of estimating medians, using my post at Central Limit Theorem for Sample Medians as a point of departure. There I consider a distribution $F$ for a sample of size $n$ (assumed to be an even number for convenience) and introduce the Beta$(n/2+1,n/2+1)$ distribution to describe the sample median. 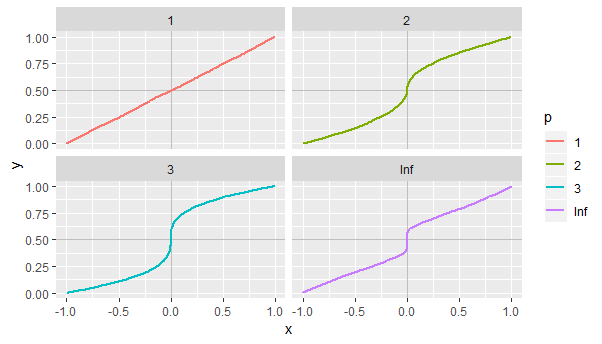 These kinds of distributions serve as natural models of the "peakedness" of any distribution at a specified percentile, and as such would have applications in finance, natural systems, and elsewhere: they are not mere mathematical curiosities or "pathologies."

This shows that for such distributions,

To illustrate, consider the distribution functions defined on $x\in [-1,1]$ by

I simulated samples of size $n=10$ through $n=10000,$ with $500$ iterations of each simulation, to estimate the standard deviation of the sample median. The foregoing assertion is tantamount to claiming that, on log-log axes, the plot of the SD against the sample size has a slope of $-p/2$ when $p$ is finite. (When $p$ is infinite, the curve never becomes linear, but just keeps dropping faster and faster.) This simulation bears out that claim: 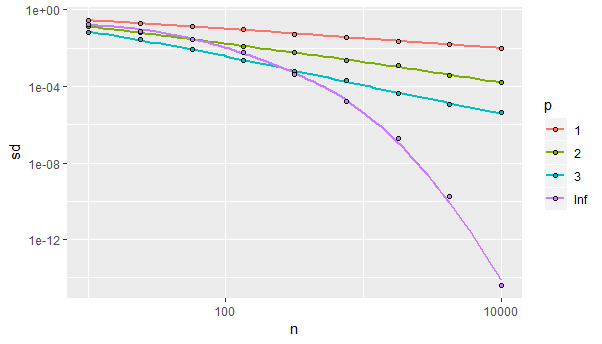 Finally, with more detailed analysis it is possible to control the shape of the peak in great detail. This furnishes examples where the estimator does not behave asymptotically according to any law at all: as $n$ grows ever larger, the estimator can bounce around various regimes of asymptotic behavior and never settle down to any definite rate as a function of $n,$ even though (of course) it will be converging towards the true percentile.

For those interested in the details, here is the R code for the simulation and the last figure.

These results are discussed (with proof) in my recent article A Beautiful Result in Probability Theory.

Not the answer you're looking for? Browse other questions tagged mathematical-statistics asymptotics or ask your own question.

62
Central limit theorem for sample medians
6
Estimation of unit-root AR(1) model with OLS
1
Can the variance of a U-statistic be of the order $O(\frac{1}{n^2})$?

3
How to determine the estimator of the asymptotic variance of the MLE estimator of the Pareto distribution?
0
jackknife estimator with central limit theorem
1
Find MLE and CI for $\psi = \mathbb{P}_\theta(X_1>0)$ when $X_1,…,X_n \sim \text{IID } \mathcal{N}(\theta,1)$
1
Asymptotic distribution after replacing quantities by consisent estimators