Area between the ROC curve and the Random Guessing Line

How close is my classifier to random guessing?

I need to quantify the inability of a binary classifier to obtain better results than random guessing in a single number evaluation metric. 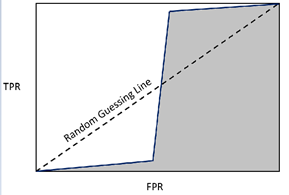 Wouldn't it be more suitable to use the area between the RGL and the ROC-curve to estimate how "close" a classifier is to actual random guessing? 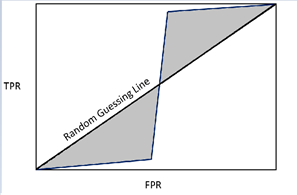 First, the 0.5 random guess line is just a visual reference, what we really want to know if how well the classifier performs overall. I'm also not sure how your proposed method would provide a different result, assuming that you subtract first section that is below the 0.5 line.

In this case, we don't need to see the AUC value to know this is a poor classifier (and one unlikely to be seen in real life, as it implies that true positive values are consistently rated under a certain probability threshold while false positive values are more evenly distributed).

How close is my classifier to random guessing?

You could test this by using Kolmogorov-Smirnov.

Small K-S statistic and high p-value suggest that your classifier is no better than random.

(Also this might help: How to determine whether a classifier is significantly better than random guessing?)

Not the answer you're looking for? Browse other questions tagged machine-learning classification roc auc or ask your own question.

12
ROC curve crossing the diagonal
1
How to determine whether a classifier is significantly better than random guessing?

6
pattern of ROC curve and choice of AUC
7
outlier detection: area under precision recall curve
2
Will ROC curve for a model always be symmetric if we have enough training data?
2
AUC with incomplete ROC curve
2
ROC curve goes “Flat” (Python)