Clustering data with covariance for each point

I am looking to cluster data points that each have a covariance around itself (based on some function of its neighbourhood, but how I got it is not important). I would like to use the covariance to achieve these properties:

Most clustering algorithms need a metric on the points, so I am considering these:

In all cases to compute the distance in closed form, I'm assuming each data point is a Gaussian (the mean is the point value, and the Gaussian covariance is the covariance for that point).

Unfortunately I lack a statistics background, so I would appreciate an analysis of the differences between them and which one might be best suited for my use!

Some properties of the data that I'm clustering:

I only have 32GB RAM, and to scale to higher dimensions I think I would have to use the variance rather than covariance (assume axis aligned variation to cut down parameters from $O(d^2)$ to just $O(d)$).

A simplified example of what I'm clustering projected down to 2 dimensions: 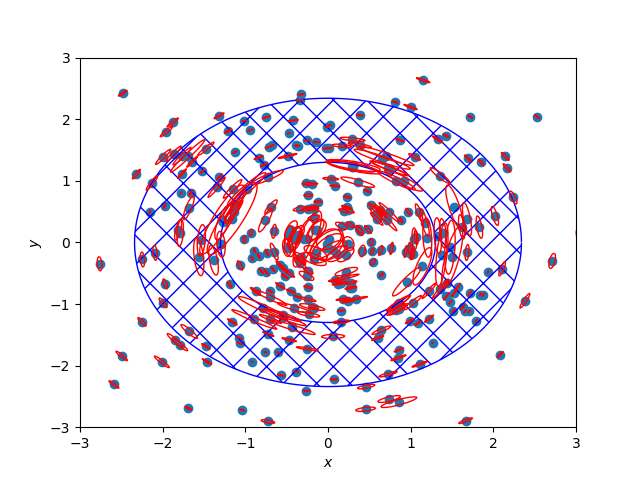 I am currently clustering with a modified kmeans such that I'm measuring the distance to each mean as $$d(x_i,\mu_j)^2 = (x_i-\mu_j)^T\Sigma_i^{-1}(x_i-\mu_j)$$ This is working out somewhat well so far because of the globular nature of the data, but it doesn't handle imbalanced clusters and I would like to shift the hyperparameter from the number of clusters k to something more intuitive.

I think HDBSCAN is the best clustering algorithm for my needs. The built-in metrics are:

It also allows for a custom function taking in 2 1-D vectors. My current idea is to squash the covariance into a 1-D vector with the data, then unsquash and calculate the metric using one of the metrics above. Is there a better way of doing this?

Not the answer you're looking for? Browse other questions tagged clustering hierarchical-clustering high-dimensional metric dbscan or ask your own question.

0
How to cluster trips, i.e. directed lines on a plain
4
Decide right number of clusters when clustering high-dimensional sparse binary data
1
How does non-uniqueness of data (aka duplicate data points) affect clustering?
1
Correct clustering approach for segmenting stores
1
which metrics are suitable for density-based clustering validation?