What does it mean that a hazard ratio is constant over time?

For example if disease resolution is the endpoint, the hazard ratio indicates the relative likelihood of disease resolution in treated versus control subjects at any given point in time. Does it mean that the hazard ratio for the treated and untreated group is the same from the beginning of the observed period to the end of the study period? What about a case when people in the treated group have more than twice of hazard rate compared to the people in the untreated group at some time point? Is the assumption violated in this case? I don't get why this assumption is needed.

Not quite. A hazard is not a likelihood. It's a complex mathematical function:

i.e. the risk that an event happens in a very small interval after a time in which a patient is known to be at risk. The hazard ratio approximates a relative risk, which is easy to interpret. So when the hazard functions for two groups are proportional, their ratio is always the same. If that ratio is 2, you can simply report the results as "Group A has twice the rate of resolution as Group B" using your example.

Does it mean that the hazard ratio for the treated and untreated group is the same from the beginning of the observed period to the end of the study period?

Yes. A graphic showing when that would be okay. Note the arbitrary shaped hazard function both groups A and B exhibit, yet they always vary by a proportionality constant of 2. 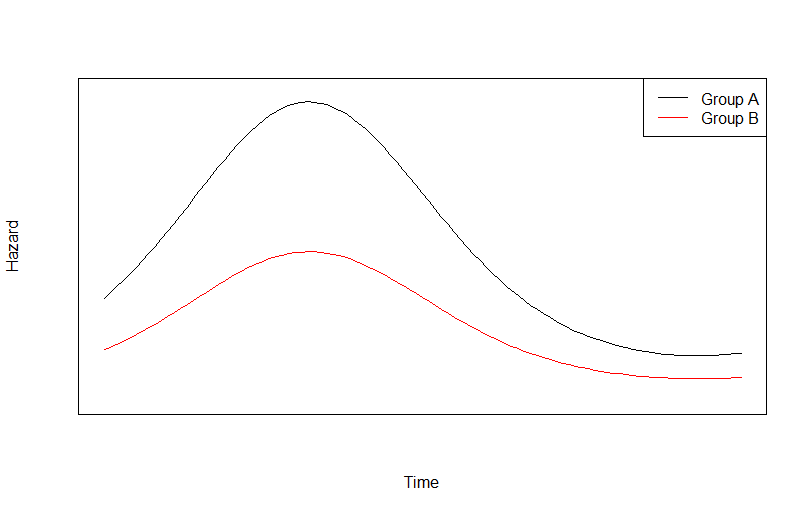 If the hazard ratio is 3 for the first 10 days and then 2 for the remainder of time under observation, the hazards are not proportional. An example like above where a time threshold leads to a interruption of the proportionality. 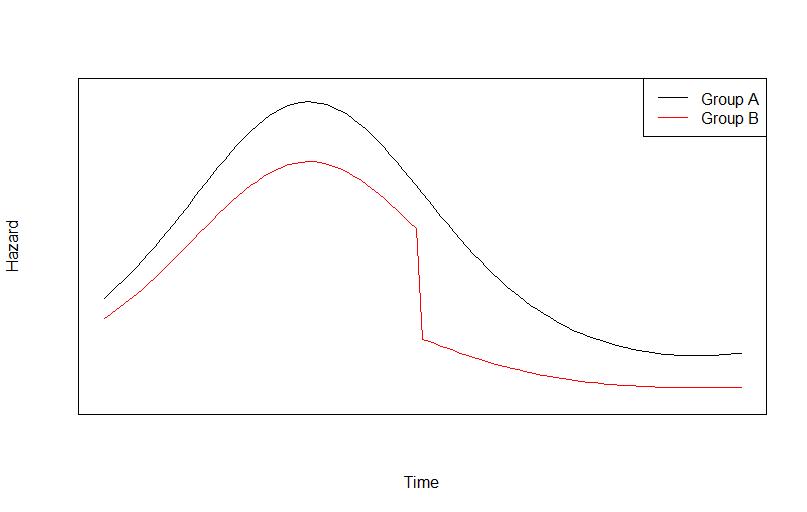 When hazards are non-proportional, you can fit a Cox model with robust error estimates and the point estimate and 95% confidence interval are correct for the failure time weighted average of the hazard ratio.