Identify a switch between probability distributions

Say I have two normal distributions with means $\mu_1$ and $\mu_2$ and standard deviations $\sigma_1$ and $\sigma_2$, respectively. A t-test reveals that the means are significantly different, but the two distributions overlap a fair bit, too. I am selecting randomly from distribution 1, but at some point switch to distribution 2 without my knowledge.

How would I identify the point at which the switch occurred? Presumably, t-tests could also help me identify when the mean has shifted significantly, but I don’t know how to divide my observations to apply the t-tests. (E.g., do I use my 10 most recent observations? 100?) Is there an alternative approach that can identify a switch between distributions? Would the accuracy of such a test be affected by the degree to which the distributions overlap?

In my opinion, it's a tricky and relatively open question that has multiple possible answers/approaches.

I would do it this way: since you have the list of observed values from two normal distributions, I can calculate the p-value at each of the partition point of the list: 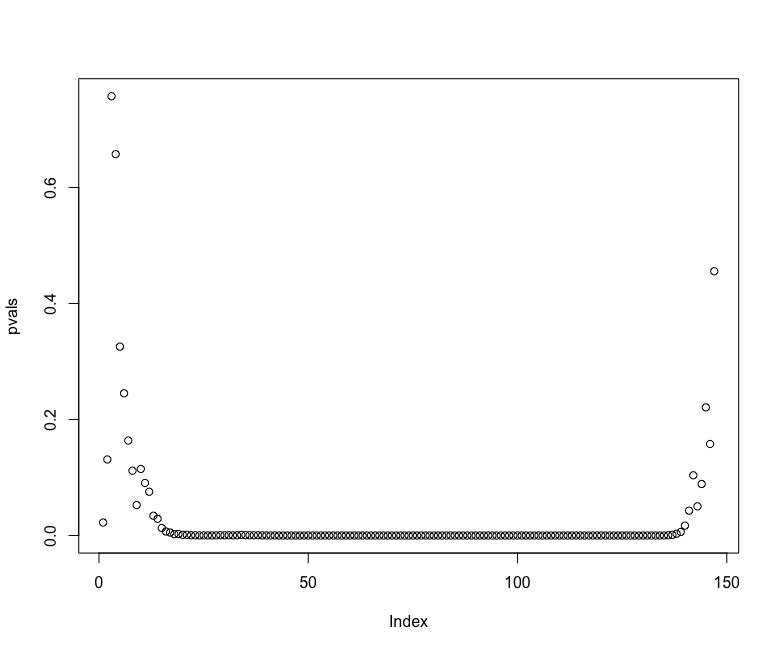 You can also get the location of the smallest p values:

Mostly I've seen switch point analyses in the context of probabilistic programming. In particular I think this approached both in Probabilistic Programming and Bayesian Methods for Hackers and the PyMC3 documentation.

I think I can hack together something that would look similar to your problem to give you a good idea of where the switch is occurring and some sense of uncertainty.

The confidence in this prediction is affected by standard deviations, means, and counts as one might expect. This effectively says if there is more overlap in the distributions they are harder to distinguish and thus require more samples.

Not the answer you're looking for?Browse other questions tagged probability distributions normal-distribution or ask your own question.