I conduct 10000 two-sample poisson tests between each element of a and the corresponding element of b, where the null hypothesis is that the two numbers are from the same poisson distribution (the rate ratio is 1).

As the null hypothesis is obviously true for this simulated data, I would expect the 10000 resulting p-values to be evenly distributed between 0 and 1. However, this is not the case. Instead the histogram shows a significant rightward skew towards 1. 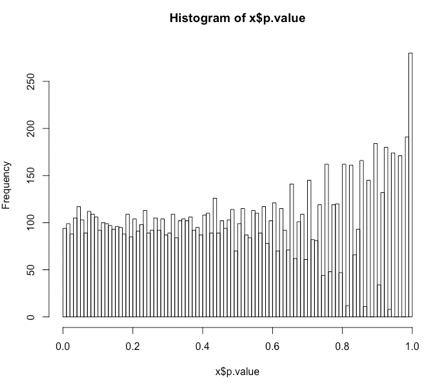 Why is this the case?

Browse other questions tagged p-value poisson-distribution histogram two-sample or ask your own question.

8
What is this "phenomenon" called?

4
Finding p-value based on Poisson Distribution
0
How a two-tailed p-value is calculated for a two-sample t-test
1
Testing if two samples have the same probability distribution
2
What does a p value histogram that is "normally" distributed mean?
0
Histogram - what constitutes grouped data?
1
simulated data of Poisson Distribution?