Python: "Normalizing" kde, so it always lines up with histogram

In Python, I am attempting to find a way to plot/rescale kde's so that they match up with the histograms of the data that they are fitted to: 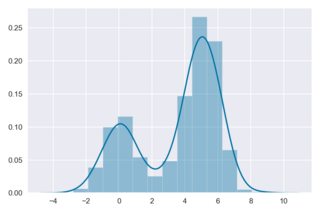 The above is a nice example of what I am going for, but for some data sources , the scaling gets completely screwed up, and you get the following results, coming from the following code: 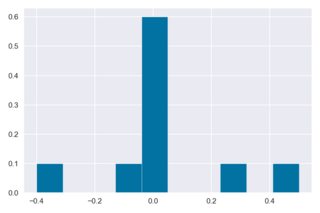 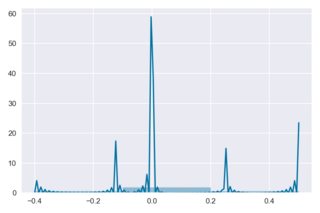 Now, I am aware that kernel density estimators are "meant" to integrate over 1, or have the area beneath them equal to one (as recounted here, and many other answers on stack exchange), so they do not necessarily have to line up with a weighted histogram.

However, I find that a kde that does line up with a histogram would be much more informative, revealing a best estimate as to how the histogram really looks (if more data were simply available).

Is there a way to do this? To consistently get a kde image that looks like the top one? I will be extremely appreciative of any help on this.

Small discrete sample. Here is a 'standard graphics' plot in R of your observations.

In my experience, the area under KDE curves, made with the default density in R, is very nearly unity. Thus KDE's are calibrated to facilitate easy comparison with density histogram.

Of course, such comparisons are more fruitful with relatively large samples from continuous distributions, than with small discrete samples.

Large, continuous sample. For example, here is a histogram of a sample of size $n = 5000$ from $\mathsf{Gamma}(6, 1).$ The broken brown curve is the default KDE and the thin black curve is the density of the population.

Summary: The point is not to show that 'R is better than Python', but my knowledge of R is greater than my knowledge of Python, so I am more likely to make useful statements about R.

Addendum: With enough adjustments of bin widths and centers of the histogram and the kernel shapes and bandwidth of the KDE, I suppose you can get the KDE to emulate the histogram of almost any data as you seem to be suggesting.

View the histogram as a density estimator, so that the area under the curve is one. I, don't know about Python, but it must be possible. Then, there is one thing that can still make the plots different, and that is the bin size of histogram/kernel width of kde, choose them to be comparable. There must be some arguments to your Python code that can do it.

Apparently the kernel bandwidth is too small in your example. According to the documentation of scipy.stats.gaussian_kde, the scipy implementation of kde only supports simple "rules of thumb" for guessing the bandwidth. I would start with "Silverman's rule of thumb", which is $$h_{SROT} = 0.9\cdot\min\left\{\hat{\sigma},\hat{\mbox{IQR}}/1.35\right\}$$ where $\hat{\sigma}$ is the stdev of your data, and $\hat{\mbox{IQR}}$ its interquartile range.

A much better method, however, is the rule by Sheather and Jones, that is available in the R function density with the option bw="SJ". This method tries to minimize the asymptotic mean integrated square error (AMISE):

Not the answer you're looking for? Browse other questions tagged python data-visualization kernel-smoothing histogram matplotlib or ask your own question.

1
Histogram for a sample in Python easily?
9
Normalizing a 2D-histogram and getting the marginals
0
QQ-plot doesn't correspond with histogram
1
How to perform KDE smoothing on a large dataset in python
0
Python KDE plot for a value and not a count
2
downsampling a kde / combining kde and histogram
2
How to choose the bandwidth of a KDE in python