Why is this probability distribution biased towards even numbers?

I am working on the probabilities of a game where

Normally I could find these probabilities with rules based on combination and permutation but for this one because of the sorting I am not sure how to work on it.

I tried to brute force all combinations but with some test it would take my old laptop about few thousand years. So I did some simulations, sampling 100 million samples. Below is the final result. 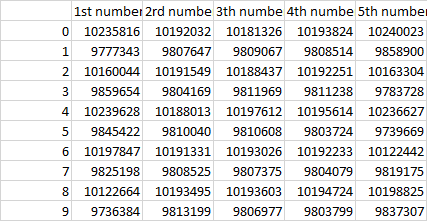 So there seems to be a small edge towards even numbers, but I don't understand where this edge comes from (even numbers appear about .5095925 of the time). 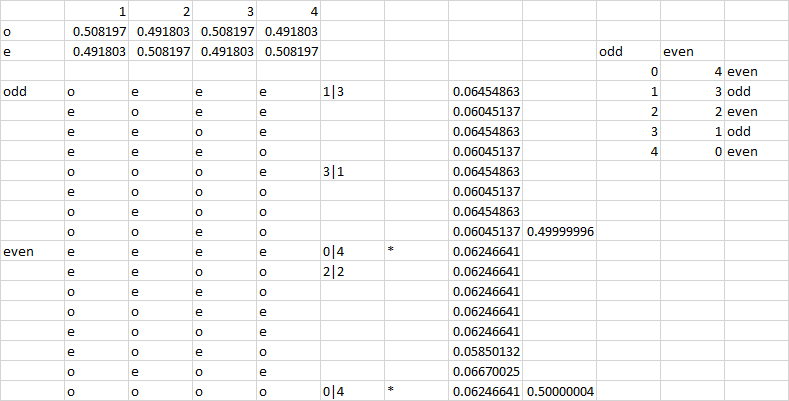 I wonder where and how the game tends to favor even numbers quite a bit. Or is my simulation code just wrong?

This is an interesting question because the result is a little surprising; it is subtle; and it has been well researched with a large simulation.

Here is a graphical representation of ten iterations of the game. Each row is an iteration. It shows the 20 numbers selected, $k_1,k_2, \ldots, k_{20},$ and uses colors to depict their partition into five groups of four. The game sums the numbers in each group, thereby producing five sums.

Nevertheless, within the large number of simulations reported in the question, there appears to be an imbalance among odd and even sums, although this procedure seemingly would not favor one parity. Indeed, if we were only to take a subset of four numbers from $\{1,2,3,\ldots, 80\}$ and sum them modulo ten, each digit would have exactly $1/10$ chance of appearing.

What strikes us first about this image are the prominent gray "bubbles" depicting the numbers that were not sampled. With only $80-76=4$ bubbles in each iteration, we're unlikely to find any bubbles in the first group of four. Moreover, when there is a bubble in that group, as in the fourth row from the top, it's just as likely to be an even number as an odd number. That means the first group (in this extreme case) is highly likely to include two odd numbers and two even numbers, making its sum even.

Let's begin with the first gap, $\Delta_1=k_1.$ What is the chance this gap is only $1,$ the smallest possible value? That's easy to compute, because

(Although only one of the ten iterations in the first figure has $\Delta_1=1$--the fifth row from the top--a longer set of simulations confirms that $\Delta_1=1$ in about a quarter of them.)

The pattern is clear. In particular, to study the first group, we can calculate the probability distribution of the sum of just the lowest four numbers in the subsample by summing over all possible values of $\Delta_1,\Delta_2,\Delta_3,\Delta_4.$ There are sufficiently few of these that this computation is feasible.

By the laws of conditional probability, the chance of such a combination $(j_1,j_2,j_3,j_4)$ is obtained by the products of the component probabilities

For the game described in the question, there are "only" 635,376 possible combinations in this quadruple sum: the calculations can be carried out in seconds. Here is the interesting part of the probability distribution of the group sum $k_1+k_2+k_3+k_4 = 4j_1+3j_2+2j_3+j_1:$

(The full distribution extends to the largest possible sum that could appear in this first group of four numbers, equal to $61+62+63+64=250.$)

The solid red dots are probabilities a little larger than suggested by their neighbors: the alternation between even and odd is clear.

When we further reduce this distribution by taking just the last digits of the sums, the alternation between even and odd persists:

This plot shows the relative differences between the probabilities and $1/10.$ The actual values (to eight digits) are

Many of them agree closely (to four or five digits) with the simulation results reported in the question.

Analogous discrepancies in probabilities occur when representing the sums in other (non-decimal) bases. Different patterns of discrepancies occur when taking groups of other sizes, especially odd sizes: groups of size $4$ are special because they have a pronounced tendency to include either zero, two, or four odd numbers, which guarantees their sum is even.

Here is the R used to do the calculations. It is coded so you can experiment with versions of this game simply by changing the parameters n, m, and g.

4
Odds of rolling doubles or triples given N 6-sided dice
2
Best process for randomly drawing an odd and an even number
2
Finding average number of rolls for recursive rolls on success
4
Choosing a discrete non-uniform distribution for generating random integers
0
Arranging numbers
1
Interpretation of frequentist probabilities
2
How many rolls required for 90% chance to reach expected values of consecutive dice rolls in tabletop game?
5
Probabilities arising from permutations