Show statistical significance (or not) between means

Suppose I have two experiments A and B. Each experiment is composed of N elements that are clearly separated into two groups. In experiment B one of the groups has a higher mean than the same group in experiment A. This difference (shown in red in the image) is what I am trying to understand. I need to show that it is significant, or not, determined by any value. p-value? a test? 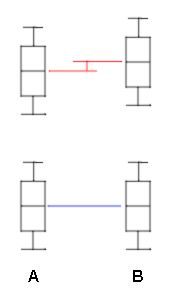 To show statistical significance (that is, to show that the results of your experiments are not just due to chance), you first need to define your hypotheses (the null and the alternative hypothesis). In this case, the null hypothesis, $H_0$, could be "There is no difference between the mean of the groups in experiments $A$ and $B$". The alternative hypothesis, $H_a$, could be "There is a difference".

Not the answer you're looking for? Browse other questions tagged statistical-significance or ask your own question.