estimate equal distribution of few points on a line

I am trying to find the best solution to estimate equal distribution of points over a line. I know I can use relative SD or similar, but I was wondering if there are more "specific" methods that can work on a limited number of points (<10) and can take into account the differences in line lengths etc and output an "absolute" number that allows comparison.

Thanks a lot in advance for any help!

If by 'equal distribution' you man uniformly distributed, then you can do a formal Kolmogorov-Smirnov test.

For example, if $U_1, U_2, \dots, U_{10},$ is a random sample from $\mathsf{Unif}(0,1),$ then a ks.test in R returns a relatively large P-value, indicating that the sample is consistent with this uniform distribution.

Large samples: By contrast, the KS-test works much better for samples of size $n = 100.$ The uniform sample is judged consistent with $\mathsf{Unif}(0,1)$ (P-value $0.98 > .05),$ while the beta sample is clearly rejected (P-value nearly $0).$ The plots also show a clear distinction between the distributions of the two samples.

Below histograms of the two saples of size $n = 100$ are shown along with density functions of their respective population distributions. Even for samples of size 100, the fit of the histograms to density curves is only rough. Distribution identification is difficult unless you have large samples. 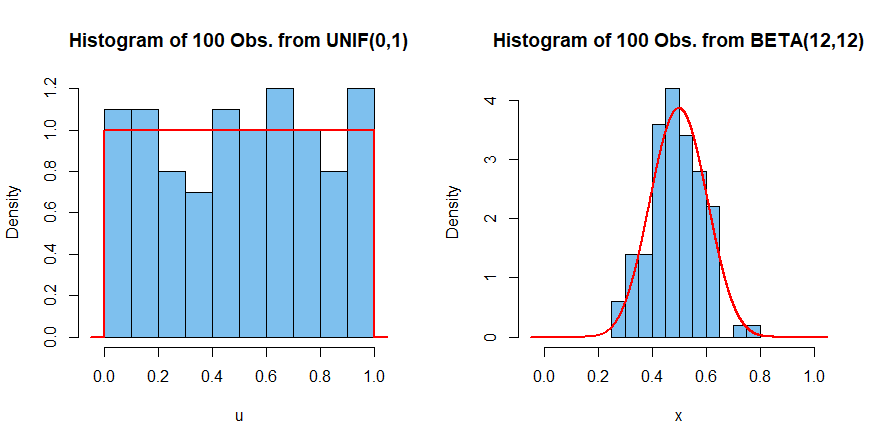 Not the answer you're looking for? Browse other questions tagged distributions distance point-estimation or ask your own question.

5
How to draw a probable outcome from a distribution?
1
Test if paired data are more similar than non-paired data
4
Get k most diverse objects from dendrogram (hierarchical clustering)
0
Clustering by same random projection
0
Can I replace the distribution in Gaussian Process Regression with a different regression?