I'm reading this lectures and to understand concepts and proofs I need to regenerate figures in pages 7-10 of this document. These figures simulate random walks with different steps. As the number of steps increases, the trajectory becomes bold. Brownian motion is when the number of steps becomes infinitely large. The following Matlab code trys to show this result:

However what I try to discover is how to incorporate parameters $\Delta t, \alpha,$ and $\sigma$ in the given document into my plots.

Regenerating this plots help me to understand concepts behind this topic. 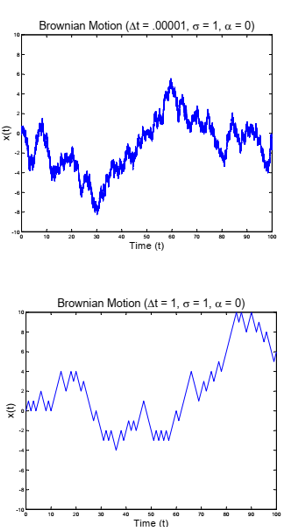 You can construct Brownian Motion as a limit of random walks in four simple steps.

The final figure depicts a sample path of a process. By virtue of the interpolation, it graphs a function defined on the non-negative real numbers. Because the function was determined by the original white noise sequence of random variables, it is a random function: that is, it's one realization of a stochastic process. If you like, you may also think of this construction as creating a family of random variables indexed by all non-negative real numbers $t.$

This path actually arose by "thinning" a more detailed sequence of processes generated in this fashion (that is, by skipping points systematically after Step 1). Here are some processes in that sequence, beginning from the preceding one. 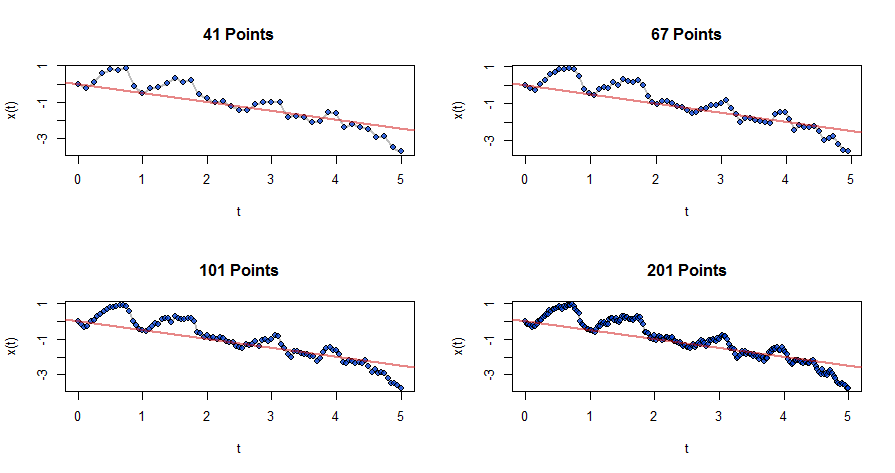 It is visually evident that these graphs are converging to something: this something is Brownian Motion: your continuous-time Wiener process. Rigorous accounts of the convergence rely on filtrations of sigma algebras, a topic that would require too much space to cover here.

This R code shows how the data in the figures were generated and plotted.

This is how you end up with a process that is continuous, but not smooth. It doesn't have the first derivative anywhere. If you remember the first derivative equation: $$\frac{dx}{dt}=\lim_{\Delta t\to 0}\frac{x(t+\Delta t)-x(t)}{\Delta t}$$ Decreasing time step $\Delta t$ doesn't work because volatility (noise) reduction gets slower and slower.

Not the answer you're looking for? Browse other questions tagged matlab random-walk brownian-motion or ask your own question.