The above is my result from the basic linear model that I've created. I've been trying to interpret these results for some time but I don't understand the mathematical formula's behind them or how to explain results such as Coefficients, Residuals & Multiple R-squared. Please be kind enough to explain this to me in a simplified manner.

Let's make sure we are on the same page: you are estimating a model following the form $Y <- \beta_0 + \beta_1X + \epsilon$ where $\epsilon$ is a random variable that follows a normal distribution (zero-mean, and an unknown $\sigma$ standard deviation) Of course, $\beta_0, \beta_1$ and don't forget $\sigma$! is what we are trying to get by fitting the model to our data.

Let's focus first on the coefficients: the "estimates" are easy: they are just the estimated values for $\beta_0$ and $\beta_1$ ("intercept" and "Salary" respectively). They are not the real $\beta_0$ and $\beta_1$, but rather the most reasonable values given the data on the sample. You are also told the standard estimation error. The t-value is nothing but the ratio between estimation and standard estimation error. If it is big, you will get a small p-value (like that 2.2e-16, or 0.00000000000000002) The p-value the result of a test for the hypothesis "$\beta_1$ (or the corresponding parameter) is a actually 0". That low p-value is telling you that "nobody believes $\beta_1$ to be 0. And what $\beta_1 \neq 0$ means is that $X$ is relevant in predicing $Y$

Above the coefficients, you have information about the residuals. The residuals are nothing but the distance between your data and what your model predicts for the data (remember, we have just a straight line, so most points of the training dataset will lay somewhere near it, but not exactly on it) Minimum and maximum are pretty self-explanatory. 1Q is the smaller value that is bigger than 25% of the residuals. Same about median (50%) and 3Q (75%) On the bottom of you have the standard error of the residuals (we don't talk about mean of residuals because it's always 0. Residuals are nothing but estimations of $\epsilon$) and its standard deviation is a good estimation for $\sigma$

The output also mentions degrees of freedom (for linear regression, number of observations - number of parameters) R-squared ($R^2$) measures goodness-of-fit (i.e.: what part of the variance in the target variable is explained by your model. In case of simple regression, it's just the square of the correlation coefficient between $Y$ and $X$) The adjusted $R^2$ is the same thing but compensating for the number of parameters (theoretically, we good increse our $R^2$ just by including more and more variables, without that meaning that the model is better. Adjusted $R^2$ is useful when comparing models with different number of parameters, so in simple regression we don't really care too much)

The final line is a test on whether every parameter $\beta$, non including $\beta_0$ is different from 0. As we only have $\beta_1$, it is equivalent to the test we have on the coefficients block for $\beta_1=0$

"formula's behind them or how to explain results such as Coefficients, Residuals & Multiple R-squared"

To visualize what that means look the following plot: 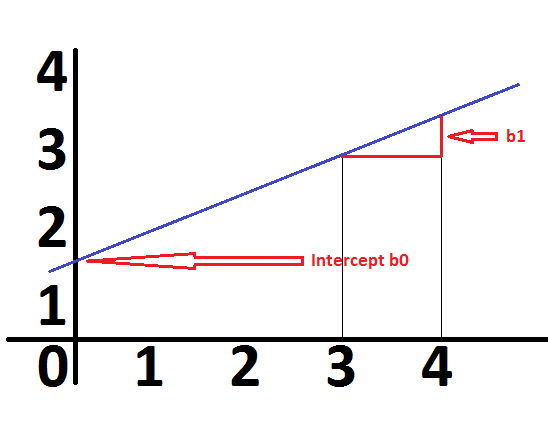 Residuals: You can make predictions with the formula above. You can predict what $y$ someone should have with a $x$ of 12,000, for example. In your case that would be:

Not the answer you're looking for? Browse other questions tagged regression interpretation or ask your own question.