A non-linear regression model for within subject observations

I checked this post: Equivalent to ANOVA for non-linear (quadratic) relationships

Basically, they did a multilevel modelling letting the intercept and coefficients vary by individuals.

Now my question is, can I do the same analysis separately for each level of the 2nd IV (ie, the number of stimulus). Or is it not correct to treat the the levels of the 2nd IV separately? To illustrate what I mean, here is an example: 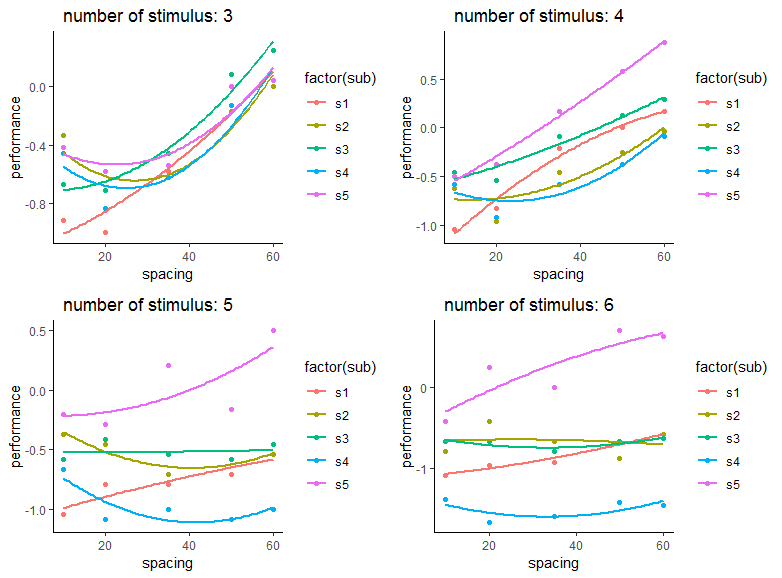 You could indeed specify a quadratic relationship between performance and spacing that is different per stimulus, and test for these differences. For example, you could use something like the R code below, based on lme4:

This fits a linear mixed model for performance with a quadratic effect for spacing and interaction with stimulus, and random intercepts, and linear and quadratic random slopes. The p-values from the anova() function are based on the Satterthwaite's method for the denominator degrees of freedom.

Not the answer you're looking for? Browse other questions tagged r mixed-model repeated-measures multilevel-analysis nonlinear-regression or ask your own question.

32
Modelling longitudinal data where the effect of time varies in functional form between individuals
4
Repeated-measures linear mixed effect model
1
How to model a complex treatment and hierarchical structure in regression with observational data
0
Which stats should I use when samples are uneven and data are not normally distributed?
0
Equivalent to ANOVA for non-linear (quadratic) relationships