Why we don’t make use of the t-distribution for constructing a confidence interval for a proportion?

My question is, why are we complacent with standard distribution for population proportion?

for small $n,$ so poor that the error dwarfs the differences between these two distributions. 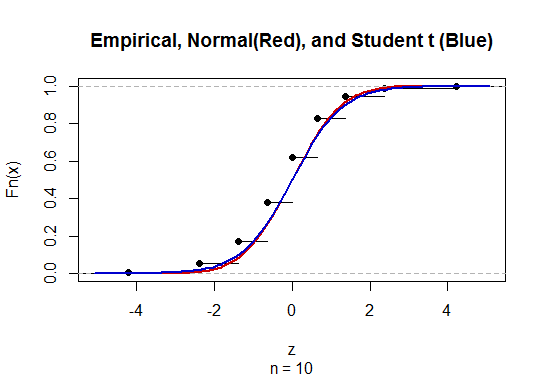 The $t$ distribution appears to do a better job of approximation.

For $n=30$ and $p=1/2,$ you can see the difference between the standard Normal and Student t distributions is completely negligible: 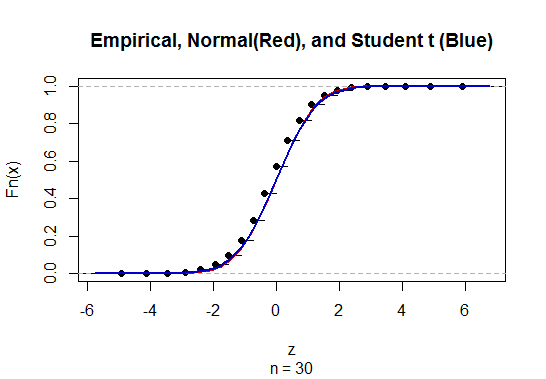 The justification for using the t distribution in the confidence interval for a mean relies on the assumption that the underlying data follows a normal distribution, which leads to a chi-squared distribution when estimating the standard deviation, and thus $\frac{\bar{x}-\mu}{s/ \sqrt{n}} \sim t_{n-1}$. This is an exact result under the assumption that the data are exactly normal that leads to confidence intervals with exactly 95% coverage when using $t$, and less than 95% coverage if using $z$.

In the case of Wald intervals for proportions, you only get asymptotic normality for $\frac{\hat{p}- p}{\sqrt{ \hat{p}(1-\hat{p} )/n}}$ when n is large enough, which depends on p. The actual coverage probability of the procedure, since the underlying counts of successes are discrete, is sometimes below and sometimes above the nominal coverage probability of 95% depending on the unknown $p$. So, there is no theoretical justification for using $t$, and there is no guarantee that from a practical perspective that using $t$ just to make the intervals wider would actually help achieve nominal coverage of 95%. 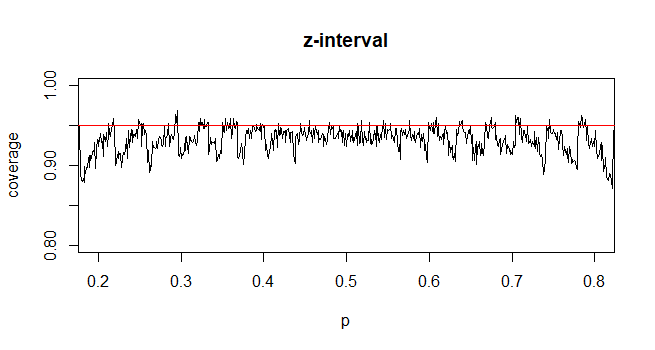 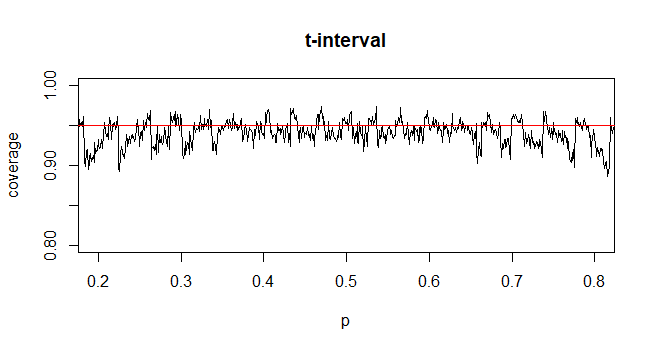 Both AdamO and jsk give a great answer.

I would try to repeat their points with plain English:

When the underlying distribution is normal, you know there are two parameters: mean and variance. T distribution offers a way to do inference on the mean without knowing the exact value of the variances. Instead of using actual variances, only sample means and sample variances are needed. Because it is an exact distribution, you know exactly what you are getting. In other words, the coverage probability is correct. The usage of t simply reflects the desire to get around the unknown populuation variance.

My professor Dr Longnecker of Texas A&M has done a simple simulation to illustrate how the different approximation works compared to the binomial based CI. 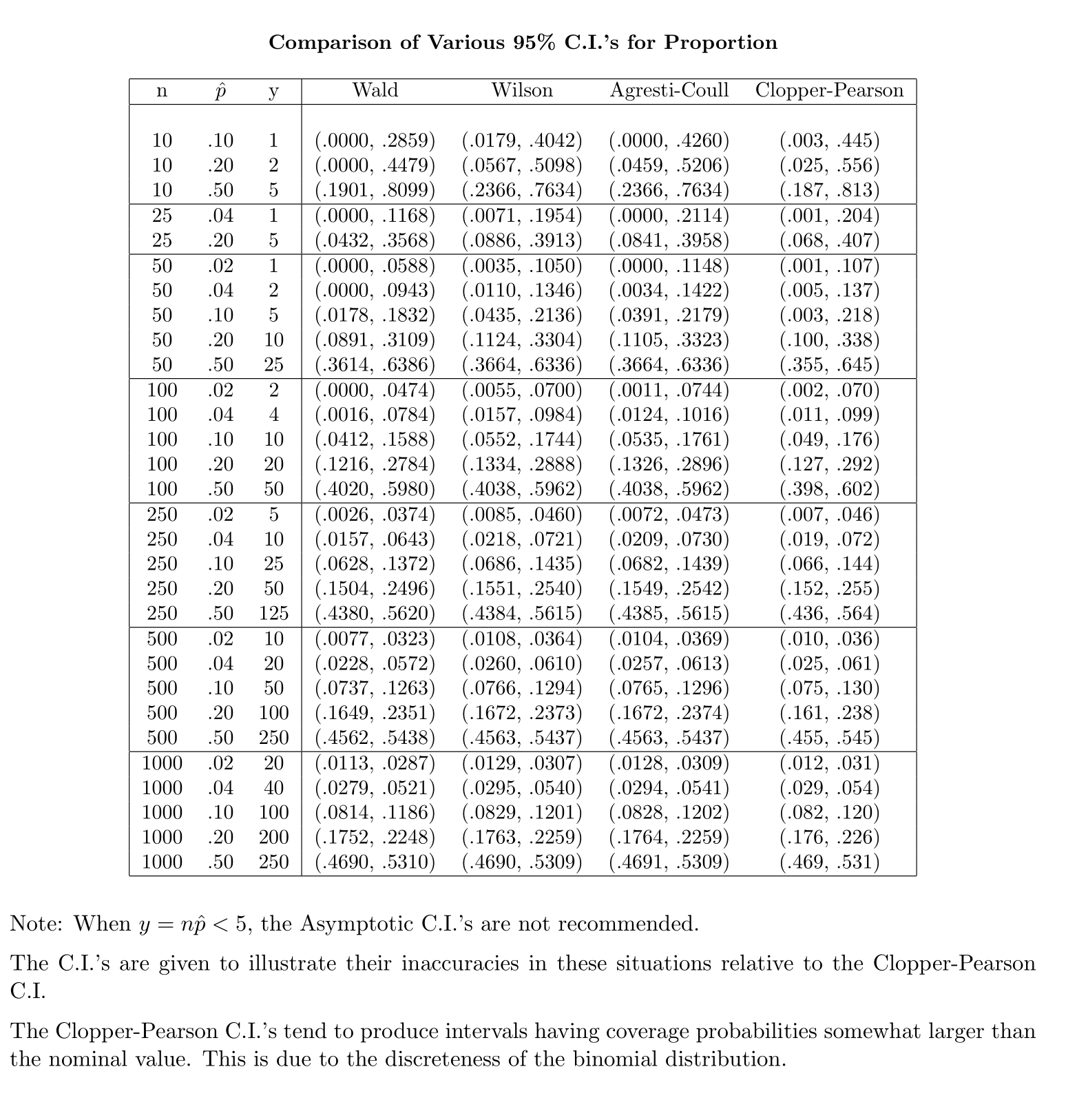 Further information can be found in the article Interval Estimation for a Binomial Proportion in Statistical Science, Vol. 16, pp.101-133, by L. Brown, T. Cai and A. DasGupta. Basically, A-C CI is recommended for n >= 40. 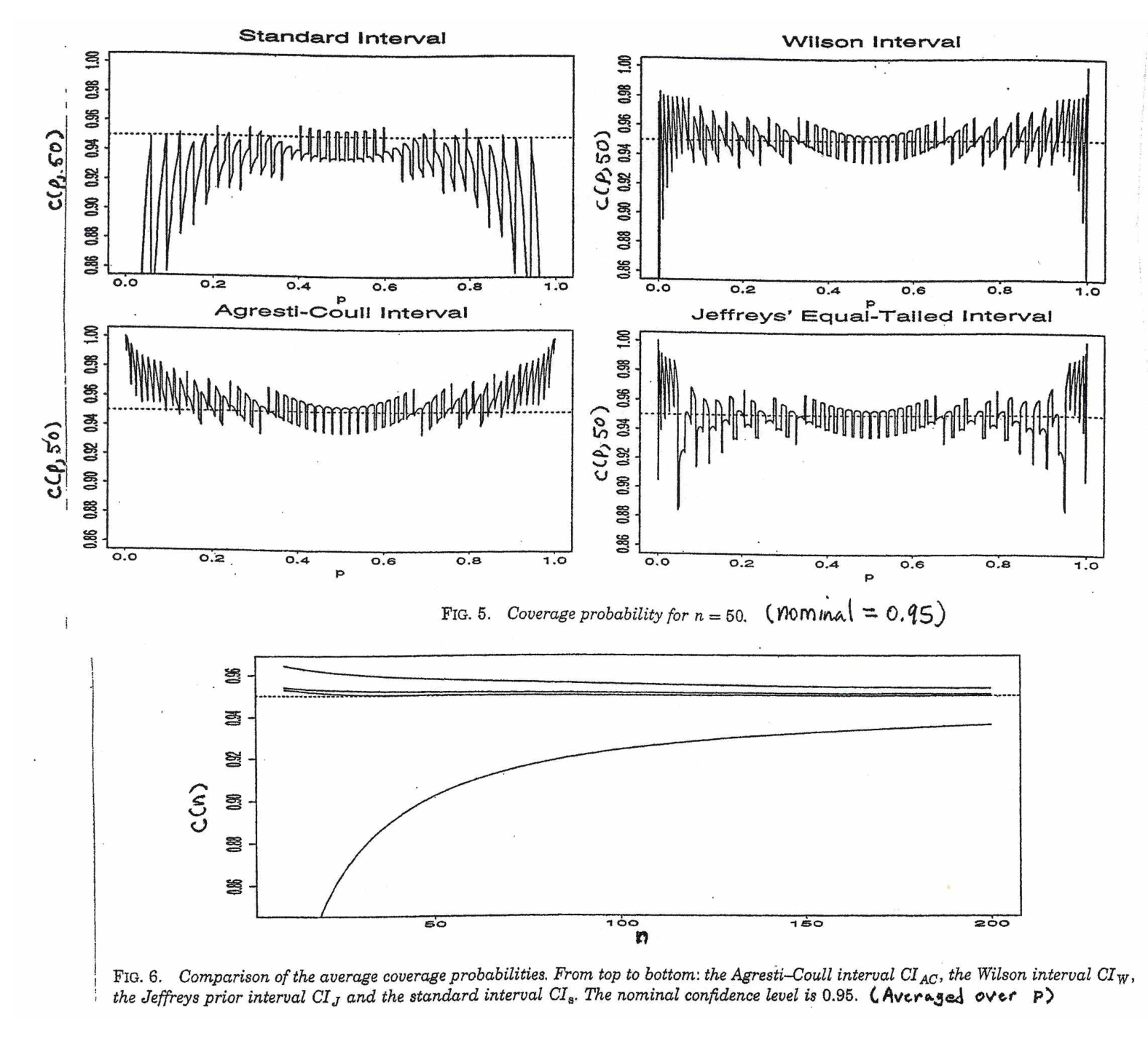 If the population standard deviation $\sigma$ is unknown and estimated by by the sample standard deviation $S,$ then we use the statistic $T=\frac{\bar X - \mu_0}{S/\sqrt{n}}.$ Before the early 1900's people supposed that $T$ is approximately standard normal for $n$ large enough and used $S$ as a substitute for unknown $\sigma.$ There was debate about how large counts as large enough.

More carefully, one can solve a somewhat messy quadratic inequality to 'invert the test'. The result is the Wilson interval. (See Wikipedia.) For a 95% confidence interval a somewhat simplified version of this result comes from defining $\check n = n+4$ and $\check p = (X+2)/\check n$ and then computing the interval as $\check p \pm 1.96\sqrt{\frac{\check p(1-\check p)}{\check n}}.$ This style of binomial confidence interval is widely known as the Agresti-Coull interval; it has been widely advocated in elementary textbooks for about the last 20 years.

In summary, one way to look at your question is that CIs for normal $\mu$ and binomial $p$ can be viewed as inversions of tests.

(a) The t distribution provides an exact solution to the problem of needing to use $S$ for $\sigma$ when $\sigma$ is unknown.

(b) Using $\hat p$ for $p$ requires some care because the mean and variance of $\hat p$ both depend on $p.$ The Agresti-Coull CI provides one serviceable way to get CIs for binomial $p$ that are reasonably accurate even for moderately small $n.$

Note your use of the $\sigma$ notation which means the (known) population standard deviation.

The T-distribution arose as an answer to the question: what happens when you don't know $\sigma$?

He noted that, when you cheat by estimating $\sigma$ from the sample as a plug-in estimator, your CIs are on average too narrow. This necessitated the T-distribution.

Conversely, if you use the T distribution when you actually do know $\sigma$, your confidence intervals will on average be too wide.

Not the answer you're looking for? Browse other questions tagged normal-distribution confidence-interval sampling t-distribution or ask your own question.

12
Should degrees of freedom corrections be used for inference on GLM parameters?
3
Two-sample difference in proportions: Why isn't estimating the standard error a problem for normality?
1
Which distribution to use in the following scenario?