I am trying to implement an unconditional asset pricing test according to the Fama & MacBeth (1973) method. The calculation of the factor-loadings as average of monthly cross-sectional regressions are all set and working. A challenge I am facing is the implementation of a proper t-Stat. Originally I just the calculation based on Cochrane (2005): $$ \sigma^2(\lambda)=1/T^2*\sum \limits_{t=1}^T (\hat\lambda_t-\bar\lambda)^2 $$ This value I used in the t-Test: $$ tStat=\frac{\bar\lambda-0}{\sqrt{\sigma^2}} $$

As this calculation of the t-Stat does not contain a correction for the error in variables problem I looked for a Shanken (1992) adjustment on the standard error. Unfortunately many papers state, that they apply the Shanken adjustments to their t-Stats but do not include a calculation for it. I found a description for the implementation of a Shanken-adjustment (http://lipas.uwasa.fi/~sjp/Teaching/eaptx/lectures/p5.pdf - slide 41 and following). This example also includes a sample implementation of the Shanken-adjustment in Stata for a single cross-sectional regression. I used this example and transferred the calculations into Matlab-code.

The problem now is that I am uncertain how the aggregation of periodic standard error calculations (following the Shanken-adjustments) into one standard error for the t-test happens. With a single cross-section regression there is no aggregation of values - but for the periodical cross-section regression according to Fama & MacBeth I run monthly cross-sectional regressions. I implemented "my interpretation" of a Shanken-adjustment in a 60 month rolling regression to reconcile the results of Artmann (2011: https://www.econstor.eu/bitstream/10419/70130/1/736358048.pdf page 36, table 8, panel F) who implemented a Shanken t-stat with Fama & MacBeth implementation. I can reconcile the paper's factor loadings approximately but the calculated t-stats a far off. 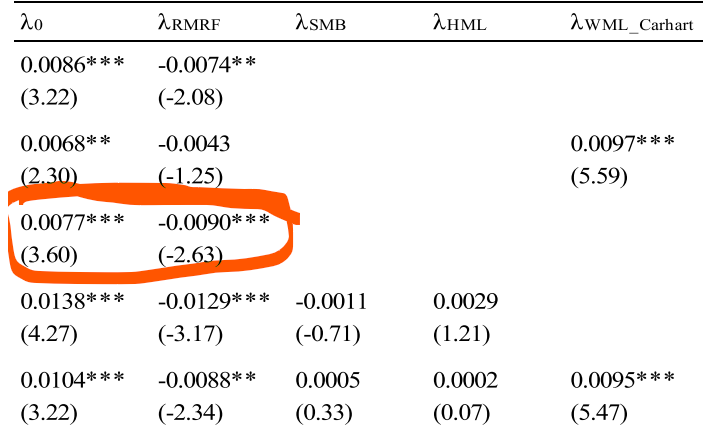 Whereas the paper arrives at a t-stat of 3.6 for the intercept my t-stat is only 1.28. Hence I assume my implementation of the Shanken-adjustment for the rolling beta estimation Fama/Macbeth procedure is faulty. My code works as follows:

The implementation follows equation 41 of the linked paper:

Do you know how to properly implement the Shanken-adjustments for the Fama/MacBeth approach? Many thanks!

I think I got the answer of how to implement the adjustment:

When calculating a rolling-regression for the beta estimate the Shanken adjustments changes to c*: $$c^*=c*(1-\frac{1.6}{n})$$ with n as number of years in sample

I'm not an expert in this, but I think you used the wrong formula. Correct me if I'm wrong.

Suppose that there are $k$ factors in the model. The number of time periods in months is $T$. In Shanken (1992), there are two formulae to correct the covariance matrix in the two theorems.

In Theorem 1, which applies to a cross-sectional regression of average returns, the formula is $$(1+c)\Omega+\Sigma_{\bar{F}}^*$$where $\Omega=A\Sigma A^\top$ is the asymptotic covariance matrix of $\lambda$ in the cross-sectional regression and $c=\lambda^\top\Sigma_F^{-1}\lambda$. $\Sigma_{\bar{F}}^*$, a (k+1)-by-(k+1) matrix, is the bordered version of $\Sigma_F$ by augmenting the $k\times k$ matrix $\Sigma_F$ with a column and a row of zeros corresponding to the places of the intercept.

There are two clues that the above summary is correct.

Finally, many people refer to Cochrane (2005). Actually if you read it carefully, the formula in Eq. (12.19) on Page 240 for Shanken's correction is applied to the cross-sectional regression, as in Theorem 1. On Page 249 when the author talks about Fama-MacBeth procedure, he writes

If one is going to use them, it is a good idea to at least calculate the Shanken correction factors outlined above, and check that the corrections are not large.

However, no formula is provided here for Fama-MacBeth regression. So I would rather trust the formula in Goyal (2012) for this case.

Not the answer you're looking for? Browse other questions tagged regression time-series matlab finance cross-correlation or ask your own question.