Model for predicting number of Youtube views of Gangnam Style

PSY's music video "Gangnam style" is popular, after a little more than 2 months it has about 540 million viewers. I learned this from my preteen children at dinner last week and soon the discussion went in the direction of if it was possible to do some kind of prediction of how many viewers there will be in 10-12 days and when(/if) the song will pass 800 million viewers or 1 billion viewers.

Here is the picture from number of viewers since it was posted:

My first attempt to reason about the model was that is should be a S-curve but this doesn't seem to fit the the No1 and No2 songs and also doesn't fit that there are no limit on how many views that the music video can have, only a slower growth.

So my question is: what kind of model should I use to predict number of viewers of the music video?

I would also have naively proposed an S-shaped logisitic curve, but this is obviously a poor fit. As far as I know, the constant increase is an approximation because YouTube counts the unique views (one per IP address), so there cannot be more views than computers.

We could use an epidemiological model where people have different susceptibility. To make it simple, we could divide it in the high risk group (say the children) and the low risk group (say the adults). Let's call $x(t)$ the proportion of "infected" children and $y(t)$ the proportion of "infected" adults at time $t$. I will call $X$ the (unknown) number of individuals in the high risk group and $Y$ the (also unknown) number of individuals in the low risk group.

where $r_1 > r_2$. I don't know how to solve that system (maybe @EpiGrad would), but looking at your graphs, we could make a couple of simplifying assumptions. Because the growth does not saturate, we can assume that $Y$ is very large and $y$ is small, or

which predicts linear growth once the high risk group is completely infected. Note that with this model there is no reason to assume $r_1 > r_2$, quite the contrary because the large term $Y-y(t)$ is now subsumed in $r_2$.

This system solves to

Update: playing around with the parameters, I could not reproduce the shape of the top curve with this model, the transition from $0$ to $600,000,000$ is always sharper than above. Continuing with the same idea, we could again assume that there are two kinds of Internet users: the "sharers" $x(t)$ and the "loners" $y(t)$. The sharers infect each other, the loners bump into the video by chance. The model is

Update: From the comments I gathered that Youtube counts views (in its secret way) and not unique IPs, which makes a big difference. Back to the drawing board.

To keep it simple, let's assume that the viewers are "infected" by the video. They come back to watch it regularly, until they clear the infection. One of the simplest models is the SIR (Susceptible-Infected-Resistant) which is the following:

where $\alpha$ is the rate of infection and $\beta$ is the rate of clearance. The total view count $x(t)$ is such that $\dot{x}(t) = kI(t)$, where $k$ is the average views per day per infected individual.

In this model, the view count starts increasing abruptly some time after the onset of the infection, which is not the case in the original data, perhaps because videos also spread in a non viral (or meme) way. I am no expert in estimating the parameters of the SIR model. Just playing with different values, here is what I came up with (in R). 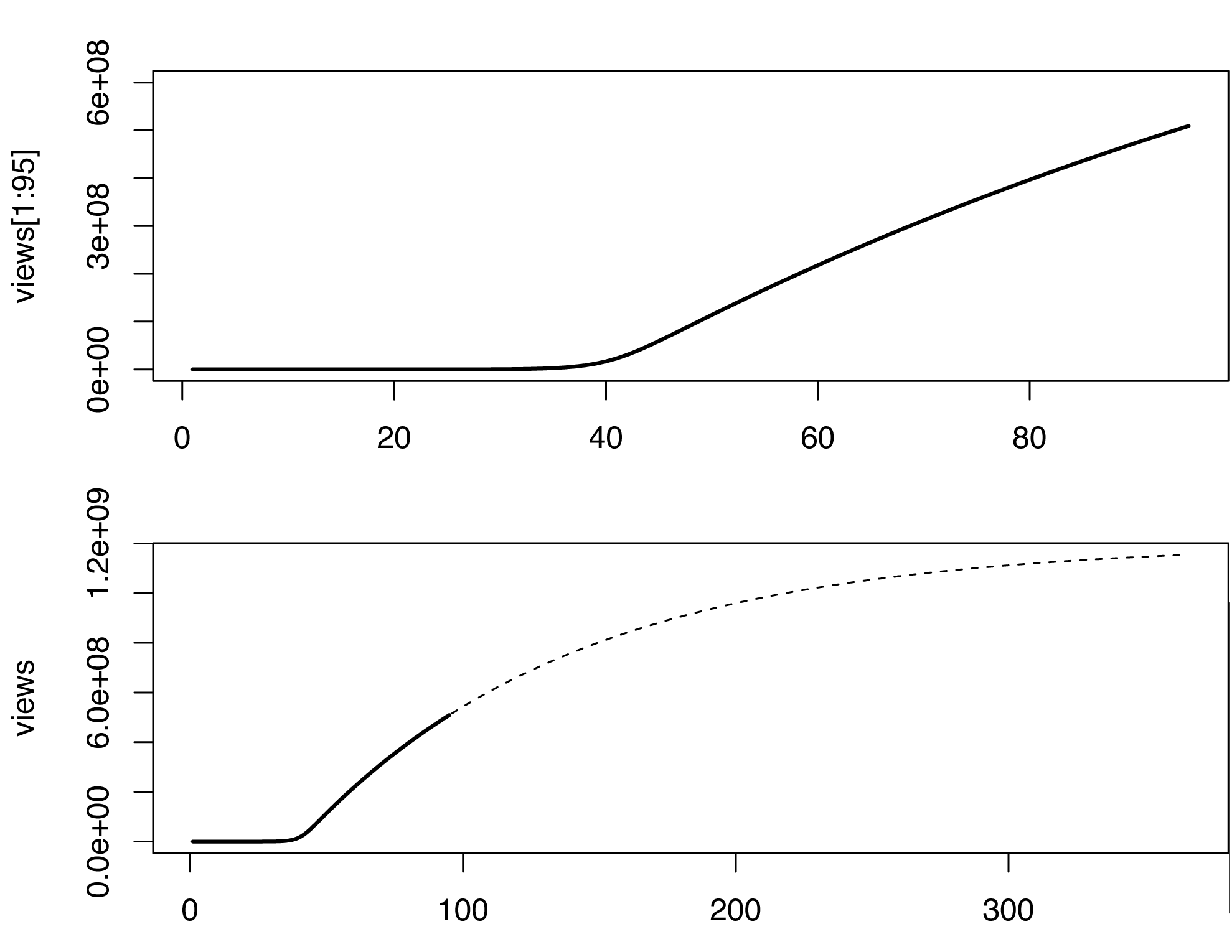 Probably the most common model for forecasting new product adoption is the Bass diffusion model, which - similar to @gui11aume's answer - models interactions between current and potential users. New product adoption is a pretty hot topic in forecasting, searching for this term should yield tons of info (which I unfortunately don't have the time to expand on here...).

I would look at the Gompertz growth curve.

The Gompertz curve is a 3-parameter (a,b,c) double-exponential formula with time, T, as an independent variable.

Gompertz growth formula is known to be good at describing many life-cycle phenomena where at first growth is accelerating, then tapers off resulting in a asymmetric sigmoid curve whose derivative is steeper on the left than on the right of the peak. For example, the total number of articles on Wikipedia which is also viral in nature, has been following a Gompertz growth curve (with certain a,b,c parameters) for many years with great accuracy. 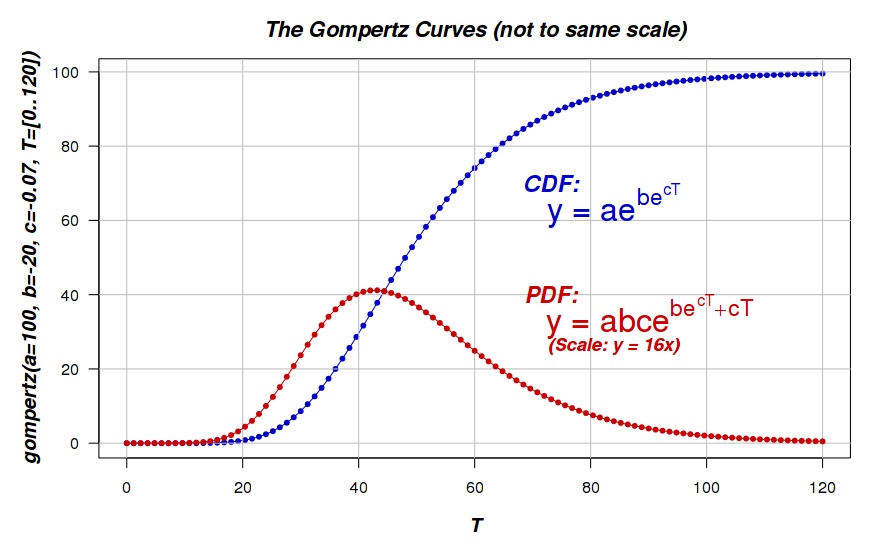 Edit: If the Gompertz curve isn't enough to approximate the shape you're looking for, you may want to add parameters d & θ as described in The Exponentaited Generalized Weibull Gompertz Distribution. Note that this paper uses x instead of t for the independent time parameter. Interestingly, Wikipedia also modified their best approximation by adding a single 4th parameter d, to account for a prediction divergence from the actual value after 2012. The modified 4-param Gompertz curve formula is:

The Gompertz function is named after Benjamin Gompertz (1779-1865), a Gauss contemporary (just 2 years Gauss' junior), the first mathematician to describe it.

I think you need to separate phenomena like Gangnam Style, which owes much of it's views to being a meme/viral thing, from Justin Bieber and Eminem, who are big artists in their own right and who also would spread widely in a traditional setting - JB or Eminem would sell a lot of singles too, I'm not sure that PSY would.

OK guys, we need some stylised facts about the diffusion of youtube videos, which turn out to suggest patterns rather different from the usual product diffusion literature. Good place to start is Meeyoung Cha, Haewoon Kwak, Pablo Rodriguez, Yong-Yeol Ahn, and Sue Moon, 2007, I Tube, You Tube, Everybody Tubes: Analyzing the World’s Largest User Generated Content Video System, Proceedings of the 7th ACM SIGCOMM conference on Internet measurement, ISBN: 978-1-59593-908-1.

Looking at the slowdown in views over the past week, the Mar-13 date looks like a decent bet. The majority of the new views appear to be already infected users that return multiple times per day.

With regards to complementing your model, one method that researchers use to track a virus' spread is to monitor its genome mutations - when and where it mutated can show researchers how fast a virus is transmitted and spread (see tracking West Nile Virus in USA).

In a practical sense, videos like Gangnam Style and Party Rock Anthem (by the group LMFAO) are more likely to 'mutate' into parodies, flash mobs, wedding dances, remixes and other video responses than say, Justin Bieber's Baby or Eminem's songs.

Researchers could analyse the number of video responses (and parodies in particular) as a proxy for mutations. Measuring the frequency and popularity of these mutations early in the life of the video could be useful is modelling its lifetime YouTube views.

Not the answer you're looking for? Browse other questions tagged modeling internet or ask your own question.

3
Algorithms for predicting a couple points in the future
2
For a research project I'm trying to estimate how many videos currently exist on Youtube
2
How to model the problem of predicting failure in Server Clusters
4
Relationship between model over fitting and number of parameters
4
Mixed model - maximum number of groups?