MCA in FactoMineR: all variables are the same on Dim 1? 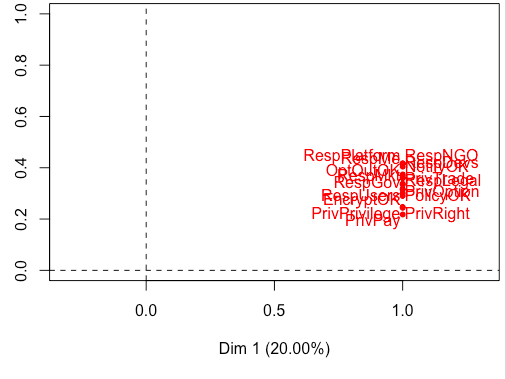 I've tried this with some other groups of variables and they seem to at least have a couple different lines, and they are similar, but not exactly 1. I tried adding a variable from one of the other groups, and it lands out of line, but these all remain 1.

Any idea what's going on? I've searched around the internet and haven't found anyone describing this issue using words I know to search for. If Dim1 isn't interesting, can I change what's being graphed?

Also, I am reusing mostly old understanding from PCA, because I have really struggled to find basic info on MCA specifically. Even if I can fix this, I'd love to learn more about MCA if you have some materials to refer me to :)

EDIT: I've run MCA() on the rest of the variables in my data, and though none of them present this way (with all of them lining up perfectly) all of the analyses have at least one similar line with 3 or more variables having the same eta2 value.

I have found "Exploratory Multivariate Analysis by Example Using R by Husson et al. and I'm working though it for a better understanding of MCA. I'll update if I can sort out why this might be happening.

Browse other questions tagged r multivariate-analysis factor-analysis eda or ask your own question.

2
Using PCA to reduce the number of variables split into groups
3
“matrix is not positive definite” - even when highly correlated variables are removed
1
PCA/factor analysis of mixed (quantitative + qualitative) data: inconsistent results
1
Linear regression on data with multiple levels?
0
How to limit the number of variables in the model with symbolicRegression in R
3
Copula for non-standard distributions in R