Should I remove the intercept when regressing against one variable (country income)?

However, if I am running a simple linear regression of 'number of stores' on 'country GDP', would it be justifiable to remove the intercept?

I understand that the intercept is the expected mean value of 'number of stores' when all independent variables, in this case only 'country GDP', equal zero.

However, it's unrealistic to expect country GDP to be equal to zero. Thus, is this a sufficient condition to justify removing the intercept from the model? Otherwise I wouldn't know what to make of the intercept, in terms of interpretation.

For me, the main point is that the true relationship between $Y$ and $x$ is seldom exactly linear over the full imaginable range of $x.$ However, over a short interval $(x_0, x_1)$ of interest, the relationship may be sufficiently near to linear to get very useful results from the simple linear model $Y_i = \beta+0 + \beta_1 X_i + e_i.$

For example, here is a hypothetical dose $(x)$ and response $(Y)$ curve (blue) for a drug. The effective dosage is approximately in the interval $x \in [4,6].$ Obviously, there would be 0 response for 0 dose, but that is not relevant to the study which produces the 21 points shown. 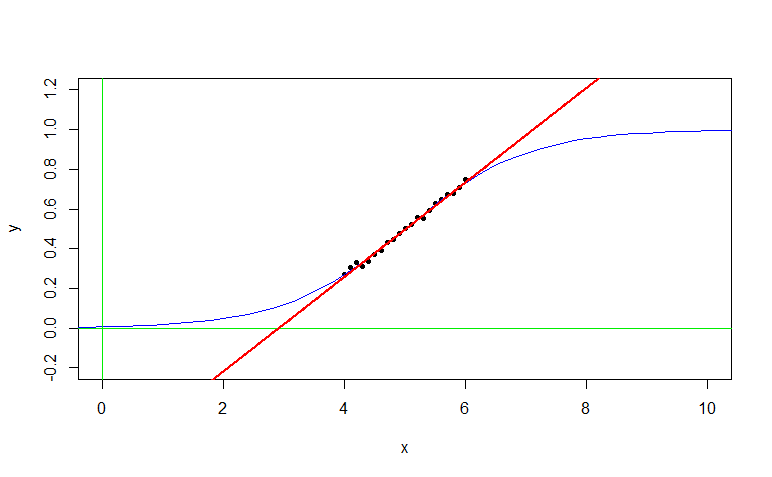 You propose a simple linear regression of the form $$ \text{Number of stores}= \beta_0 + \beta_1 \text{GDP}+\text{Error} $$
so yes, the constant $\beta_0$ is the expected number of stores when GDP is zero, which isn't very meaningful, as you say. But, first, there is usually no need to interpret the coefficient. If you want a more interpretable value for the constant, change to the equivalent model $$ \text{Number of stores}= \beta_0 + \beta_1\left\{ \text{GDP} - \operatorname{mean}(\text{GDP})\right\}+\text{Error} $$ (or some other meaningful centering constant like the median.) Then the constant becomes meaningful.

Another viewpoint is that even for a very poor economy, with low GPD, there will be some stores for basic products. That's why you should not expect the line to pass through zero. Then $\beta_1$ is a growth rate for when the economy passes this very basic/poor level, and also gets some stores for inessential (or even luxury) products.

There have already been given many good answers to your question, but I'd like to add a few points that have not yet been raised.

1. Not all parameters in a model need to have an interesting interpretation

By this I mean that sometimes models can have so called "nuisance parameters", i.e. parts of a model that are not of primary interest but that we need in order to draw conclusions about the things we do care about.

In the case of simple linear regression on the form $Y_i = \beta_0 + \beta_1 X_i + \varepsilon$, we might not be interested in knowing the average value of $Y_i$ when $X_i = 0$ (which would be the intercept). In your example, drawing conclusions about the number of stores when the GDP is 0 is not interesting, but without the intercept $\beta_1$ will not be correctly estimated.

2. Even when the intercept is not needed, estimating it is seldom costly

There are indeed cases where not including the intercept in the model is appropriate. However, in cases where one could see an argument for excluding it, including the intercept is usually not that costly since you only need to estimate one more parameter in your model, thus losing you one degree of freedom. Unless your dataset is very small, the difference between estimating one or two coefficients in a linear regression model is negliable. Furthermore, if the intercept truly is zero, then it will in large samples be estimated to close to zero (in a correctly specified model).

3. Correlation is not causation

If your aim is to just estimate the association between GDP and number of stores, then I would instead recommend just estimating the correlation between the two. It contains the same information as a simple OLS regression does, but without the implicit bagage of one variable being the dependent variable and one the explanatory.

It's not a very good idea to force the intercept term to be zero in this case. Why I'm saying so is, anyway we cannot get the exact relationship between the two variables and there might be other factors affecting the response which are not taken into account here.

Also, in regression, extrapolation is not advised. So when you fit a regression equation better being limited to the range of the predictor variable. In that case, I suppose letting the intercept term being zero is not a fact to be worried much about.

Not the answer you're looking for? Browse other questions tagged regression multiple-regression modeling intercept or ask your own question.

148
When is it ok to remove the intercept in a linear regression model?

5
Condition Number in Single Variable Regression
1
fixing the intercept in multiple regression
0
Data analysis using Gross vs. Variation Data
3
Fitting simple linear regression with no intercept
5
Logistic model output when all inputs are zero
1
How To Get Intercept with Moore-Penrose Pseudo Inverse
4
How does one interpret regression coefficients when no dummy variables nor intercept are dropped?
0
Interpretation of simple regression results with a single categorical variable
4
Why is the intercept different from the mean of Y when X=0?