What test do I use to check if two samples came from different population?

I'm also aware that Wilcoxon-test and KS-test are non-parametric methods to compare two distributions. But I'm confused if they truly compare "if two distributions came from the sample population."

What other hypothesis tests are available to test if two distributions came from the same population, both parametric and non-parametric?

Your question is too broad for a thorough discussion here. Of the tests you mentioned, the Kolmogorov-Smirnov test is the only one generally regarded as a straightforward test of the difference between two distributions.

A Kolmogorov-Smirnov test (ks.test in R) is (barely) able to detect at the 5% level that the samples came from different distributions:

Moreover, the K-S test is moderately intolerant of ties. If we round the values in the two samples to integers, thus inducing ties, then the (approximate) P-value increases. (Subsequently, we return to unrounded data.)

Below we show kernel density estimators (roughly, 'smoothed histograms') of the two samples in the left panel. They show that Sample 1 (with mean 99.27) has generally larger values than does Sample 2 (mean 96.01).

The right panel shows empirical cumulative distribution functions of the two samples. ECDFs, which increase by $1/n$ at each sorted value of the sample, are estimates of the CDFs of the distributions from which we sampled. The K-S test statistic $D = 0.179$ is the largest vertical discrepancy between the two ECDFs. [For further details of the K-S test perhaps you can start with Wikipedia] under the two-sample heading.] 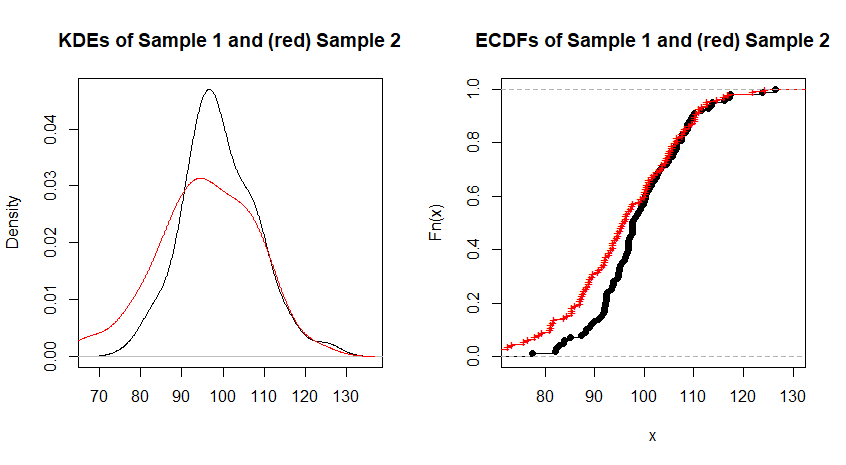 Finally, the two-sample Wilcoxon (rank sum) test [also called the Mann-Whitney test] is often said to test whether the parent distribution of one sample 'dominates' (is generally larger than) the distribution of another. The one-sided Wicoxon SR test

The P-value is roughly the same for the rounded data, but with a warning message about ties.

Perhaps others on this site will want to explain additional tests relevant to your Question.

A non-parametric test for whether the samples came from the same population is the permutation test. Let's say you have two samples $X$ and $Y$ from distributions with cumulative distribution functions $F_X$ and $F_Y$ respectively. We want to reject the null

The procedure is as follows:

More details can be found here

Kolmogorov-Smirnov test can be used to check whether a sample is from a given distribution (one sample KS test) or to test whether two samples are having same underlying distribution (two sample KS test). So, you can use 2-sample KS test. Another option is Mann–Whitney U test. I cannot tell which one you need to use unless you provide more details about your problem. If I want to shortly explain, KS-test is based on differences in the empirical CDF's of the samples and is sensative to shapes, spreads or medians. On the other hand, Mann–Whitney U test works based on differences between the mean ranks of the two groups.

The Baumgartner-Weiss-Schindler test is "a non-parametric hypothesis test for the null of equal probability distributions of two samples" that is "more powerful than ... other tests under certain alternatives." In R:

Not the answer you're looking for? Browse other questions tagged hypothesis-testing nonparametric or ask your own question.

4
How to compare two non-normally distributed samples with very different sizes? (Mann-Whitney vs Randomization/Bootstrap)
1
Is testing the equality of two distributions different from testing the equality of two means?
1
Compare two samples from same population taken at different times
2
Inconsistent information about Mood's median test assumptions
5
Is the inference from a parametric test valid when the population distribution is not normal?
23
Non-parametric test if two samples are drawn from the same distribution
3
Is there a parametric equivalent to the chi-squared test?