How can we write the sample variance's formal definition of a continuous random variable considering Bessel's correction? [closed]

I am trying to find the formal way of writing the sample variance of a continuous random variable considering Bessel's correction.

I ask because the sample variance is usually written this way:

But I don't see how can we consider the Bessel's correction of a sample of a continuous random variable, specially if the probability measure is not the same for each observation.

I searched in google and in this website to no avail.

Thanks for your help, as always.

a relationship used to make confidence intervals for $\sigma^2$ and to do tests involving $\sigma^2$ based on $S^2.$

Because expectation is a linear operator and taking the square root is not a lineat transformation, we do not generally have $E(S) = \sigma,$ so $S$ is not an unbiased estimate of $\sigma.$

Addendum on the estimation of $\sigma^2:$ It seems that there are compromises to be made all around in making inferences about normal population variances.

A popular criterion for judging the usefulness of an estimator is 'root mean square error' (RMSE). The RMSE of an estimator $T$ of a parameter $\tau$ is defined as $\sqrt{E[(T-\tau))^2]}.$ A small RMSE is considered desirable.

According the RMSE criterion, the sample variance $V_1 = S^2$ has a slightly larger RMSE than the MLE $V_1,$ so one might argue in favor of using the MLE. However, $V_3$ has still smaller RMSE, but its use is resisted because it is even more biased than the MLE.

Histograms of the simulated distributions of the four variance estimators, with vertical bars at $\sigma^2 = 225.$ 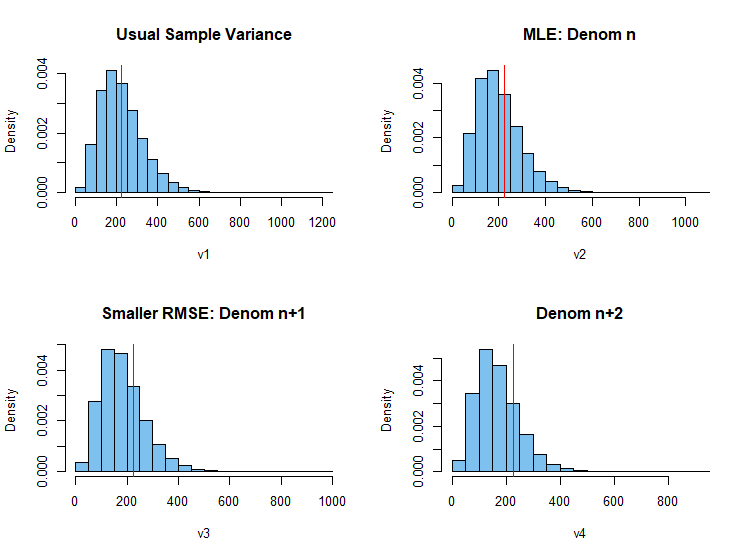 Not the answer you're looking for? Browse other questions tagged variance expected-value sample bessels-correction or ask your own question.

2
Approximating the expected value and variance of the function of a (continuous univariate) random variable
2
Asymptotic Expectation of Ratio of Sample Averages
8
Degrees of Freedom In Sample Variance
1
Directly discarding big term in the proof of error propagation formula of variance from random variable $x$ to $f(x)$?