Intuition for nonmonotonicity of coefficient paths in ridge regression

Intuitively, why may some of the slope coefficients in ridge regression increase in magnitude when the penalty parameter $\lambda$ is increased? Or in other words, why are the coefficient paths nonmonotonic?

Above is an example of ridge coefficient paths taken from James et al. "An Introduction to Statistical Learning" (Figure 6.4 on p. 216). As you can see, Income and Rating are nonmonotonic w.r.t. $\lambda$.

Algebraic and geometric arguments will be appreciated.

My reasoning is somewhat similar to Cagdas', but I'd like to look at how the things develop as $\lambda$ goes into extremes.

If I did my algebra right, the derivative of the coefficients is given by:

Now, for $\lambda \rightarrow 0$, ridge regression approaches ordinary linear regression. The penalty term becomes negligible and you can approximate the derivative by:

On the other hand, when $\lambda \rightarrow \infty$, $\lambda I \gg X'X$ and you can approximate the derivative by:

Here, the gradient is determined almost entirely by the value of $\hat{\beta}$, and ridge regression tries to force it to a null vector. The path of $\hat{\beta}$ for large and increasing $\lambda$'s is almost a straight line towards the origin.

To illustrate this behaviour, here a simple data set with correlated variables:

The path of the coefficients $\beta$ with an increasing $\lambda$ looks like this: 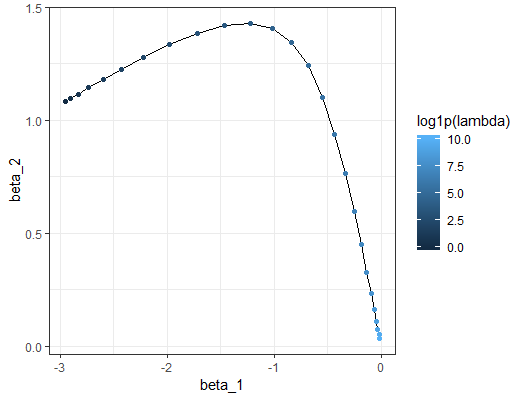 I think the key intuition to think of here is a situation where you are interested in modelling a single outcome of interest, $Y$, with three possible independent variables, $W$, $X$, $Z$. Imagine in a standard regression, $W$ and $X$ are found significant whereas the coefficient on $Z$ is found insignificant and close to zero, although $Z$ and $Y$ are correlated one-on-one.

Let's assume the reason that $Z$ is not significant in the full regression is because all the effect of $Z$ is subsumed in $W$ and $X$ (i.e. they jointly form a better predictor). Now in a ridge regression context, for some parameter values of $\lambda$ it might be the case that using $Z$ is preferred over having both $W$ and $X$ due to the inclusion of a parameter error term.

This example is also illustrative why ridge regression is used less within an inferential context, because even when controlling for potential confounders, they might still be 'the last coefficient standing'.

This is illustrated in the R-squared of the former (at 0.97) relative to the latter (at 0.35). However, the L1-norm is strictly higher in the former case than in the latter (namely $L_1 = \sqrt{\beta_0^2 + \beta_1^2 + \beta_2^2}$). As you drive up $\lambda$, the model will prioritise minimising the $L_1$-norm over the SSE. At some point, the model will prefer having just a single non-zero $\beta$ driving the $L_1$-norm, even at the cost of a much poorer model fit. Therefore, you can see that the coefficients on $\beta_x$ and $\beta_z$ start to decrease up to the point that only $\beta_w$ is non-zero. Also note that further increasing $\lambda$ makes the $L_1$-norm important enough to completely lose interest in minimising any SSE (and therefore generating any model fit) and drives all coefficients to zero. 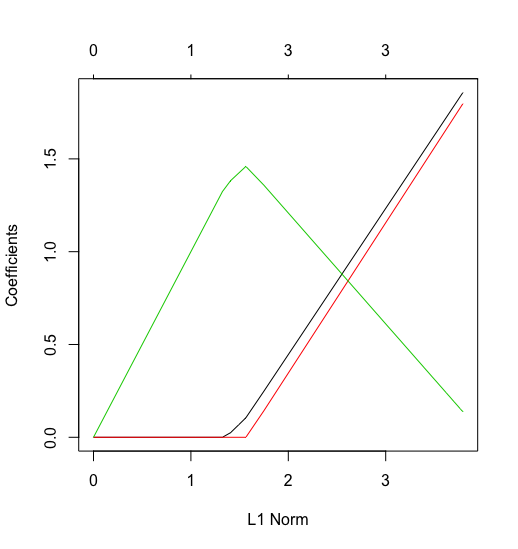 If my matrix algebra is right, derivative of Ridge with respect to $\lambda$:

Suppose that $X$s are not co-linear and are whitened before regression. In that case $\frac{X'X}{n}$ is $I$ where $n$ is the number of data points. Hence:

which will be $0$ when a component of $\hat{\beta_\lambda}$ becomes $0$. In this case we should have a monotonic scenario. Basically if we start with no correlation between regressors they will go to $0$ with increasing $\lambda$ without changing direction starting from their cross-covariance with $y$ as their initial values.

Not the answer you're looking for? Browse other questions tagged regression-coefficients ridge-regression intuition linear-algebra or ask your own question.

1
Do any of zero coefficients become non-zero by increasing $\lambda$ in lasso regression?