How does the p-value work for two groups that don't follow any particular distribution?

I was working on a project that required me to perform some hypothesis testing. Specifically, the project is seeing whether or not Twitter sentiment has more influence on the Bitcoin prices in the Korean markets than it does in the US markets. My conclusion shows that there is almost no correlation between Twitter sentiment and Bitcoin prices, and this is the same for both American and Korean prices.

More specifically, the results that I found look like the following: 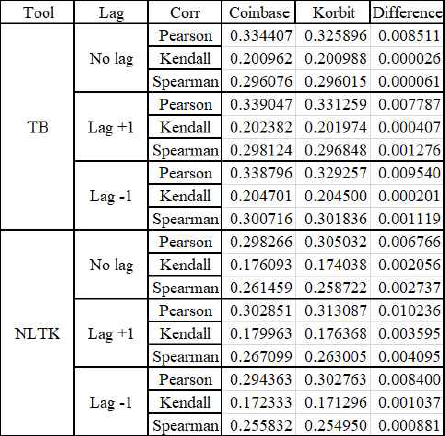 Basically what I did is run the function contained within Python's Scipy library using the correlation metrics for both Coinbase and Korbit columns. I get a t-statistic and p-value of 0.0457 and 0.9637, respectively.

My conclusion is drawn that since the p-value is higher than a significance level of 0.5, we fail to reject the null hypothesis that "There is no difference between the two markets."

What's confusing me is that most of the resources that I read or study regarding p-values seems to speak under the assumption that the two groups are normally distributed, which mine are not. Is the approach that I have taken correct? If so, are t-tests also valid for such unstructured data?

Just wanted to add in some more detail regarding my project as I realized the information I provided is insufficient for a proper answer.

The reason why I conducted hypothesis testing is also under similar settings. My mentor advised that when I want to present that the findings of low correlation for both American and Korean prices, it isn't sufficient to simply say "The correlations are low and therefore -" but I should test my hypothesis and conclude whether there is statistical significance or not. I wasn't previously familiar with hypothesis testing, but I did roughly read up on it and found that I may be able to use the t-test's p-value in order to accept or reject the null hypothesis that states "Korean and US markets do not differ regarding correlation with Twitter sentiment data." It also seemed to make sense because the p-value is higher than a confidence level of 0.5, which apparently signifies that the null hypothesis is accepted.

The Spearman rank correlation test maybe be performed if your data is not bivariate normal and cannot be transformed to be bivariate normal. This is because the Spearman rank correlation test is a non-parametric test, based on ranks. Under the null hypothesis of this test, and when you your sample is large, this test follows a t-distribution with $n-2$ degrees of freedom.

The Kendall rank correlation test is also a non-parametric test that uses a similar, but slightly different approach than the Spearman rank correlation test, so it does not demand any distributional assumptions. As a result, tests based on this would be appropriate for your data.

Not the answer you're looking for? Browse other questions tagged statistical-significance t-test p-value or ask your own question.

7
Interpreting p-values in Fisher vs Neyman-Pearson frameworks
11
Two methods of bootstrap significance tests
2
What value does one set, in general, for the null hypothesis of β0 in a linear regression model?
0
What's the right t-test for comparing the distribution of a response variable across two categories for the same sample?
1
How to know which statistical test to use?
0
Correlation one-sided p-value