One-tailed t-test and confidence interval of difference in means

Typical t-test checks if two sample means are significantly different from each other. Let's assume the following two sample sets:

I can construct their 95% confidence interval of means:

There's an overlap between the two confidence intervals, and therefore the sample means are not significantly different. We can also formally test this using t-test assuming equal variance:

Since the p-value is not smaller than 0.05, we cannot reject the null hypothesis, and conclude that sample means are not significantly different.

But what if I want to know if one group has higher means than the other?

Visualization. Boxplots of the two samples, plotted sided-by-side on the same scale, illustrate the considerable overlap of values between the two samples. 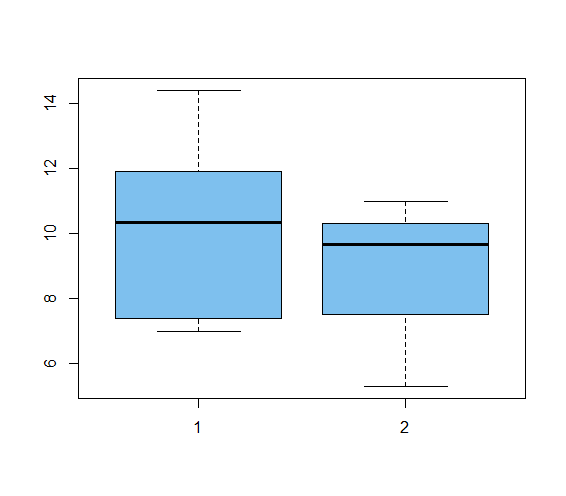 For both the right-sided and the two-sided test, the null distribution is Student's t distribution with 16.74 degrees of freedom; its density function is shown in both graphs below. At left, the critical value $c = 1.741$ is located at the vertical dotted line; 5% of the area under the density curve lies to the right of that line. The solid blue vertical line shows the observed value $T = 1.25$ of the test statistic; the area under the density curve to the right of this line is the P-value. At right, the critical values $\pm 2.112$ are shown as dotted vertical lines, each cutting 2.5% of the area from a tail of the distribution. Taking into account that $T = -1.25$ would have be just as extreme (in the directions of the alternative) as $T = 1.25,$ the P-value gets doubled.

Notes: (1) Each sample separately is consistent with random sampling from a normal population. Samples are small, but we can see that there is no marked departure from normality that would interfere with the validity of a t test. (2) The sample variances are noticeably different, but not significantly different. Lacking advance information that the two populations have essentially the same variance, I followed standard practice and used the Welch t test, which does not assume equal population variances. (3) However, the P-value of of a right-tailed, 2-sample pooled t test is also about 0.11, so it wouldn't have found a significant difference either. (4) In the Welch test, R uses fractional degrees of freedom for the t distribution. Some software and almost all printed tables would use 16 or 17 degrees of freedom instead of 16.74; results for non-rejection would be unchanged.

8
Some questions about two-sample comparisons