How can I understand the complex regression models?

I can understand how it works when there are two variables in the linear regression model(the shaded circles represent the observed variables, and the white ones the latent variables): 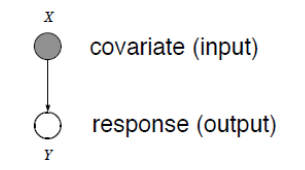 We can draw the following scatter plot for the above graph(or linear regression function): 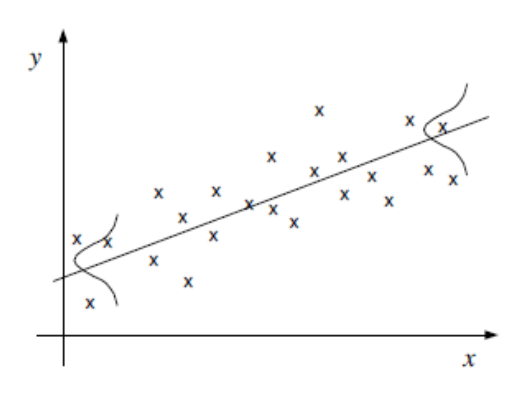 But when it comes a little bit complex(we have still one observed variable but two latent ones): 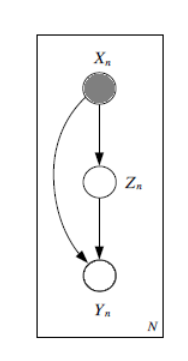 I don't understand why its diagram becomes this one(analogous to the scatter plot of the linear regression above): 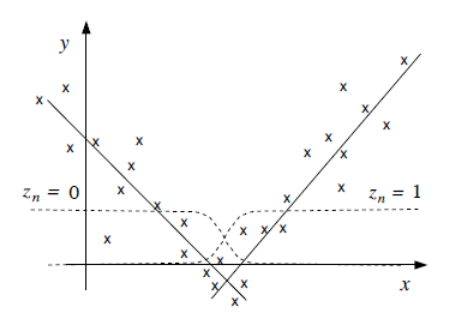 And how can I model the so-called complex regression model? Could anyone please recommend any related articles for me? It just becomes too abstract to me. Thanks in advance.

My questions, to be precise, include the following:

1) what is the so-called complex regression models? I have searched Google and found nothing related to it. I thought maybe someone can tell what probabilistic graphical model it is according to the graph and the scatter plot.
2) how can I model that which has two hierarchical latent variables(targets)?
3) how are the scatter plot and graph pair related? I saw that on a slide which obviously shows that they are representing the same underlying mechanism but in two different ways.

It's hard to say anything for sure without knowing the exact context of the pictures you have provided. Below is my guess on what is going on in the pictures.

The case of the first two pictures is clear. To ease myself the explanation of the second case I write down the situation in the pictures in the form of a mathematical equation:

I guess two latter plots present a situation which can be described with two equations (one for each node in the graph pointed by arrows):

OK. So what's going on here?

I guess the second situation presents an example of a regime-switching model. It's a class of models which kind of consist of multiple submodels (regimes) and are able to switch between them depending on the situation. I guess in your case the $z_n$ variable indicates the regime of your model. It may have one of two values: 0 or 1 each value representing one regime. I used logistic regression as an example to model the probability of $z_n$ being 1 depending on the value of $x_n$, but there are also other choices possible. The second equation describes the effect of $x_n$ variable on the $y_n$ variable accounting for both regimes the model may be in. These regimes are represented by the $z_n$ variable. If $z_n = 0$ this equation reduces to $y_n = \gamma - x_n + \epsilon$. For $z_n = 1$ the equation is equivalent to $y_n = \gamma + \delta + x_n + \epsilon$.

Now the interpretation of both pictures becomes clearer:

The second picture is actually two pictures overlaid. One for each equation. Dashed lines present the way the $x_n$ variable influences $z_n$: the probability of $z_n$ being 0 or 1 depending on the value of $x_n$ as described in the first equation. Solid lines and x's is the second picture describing the two regimes of how $x_n$ influences $y_n$. In this example situation regimes switch in the middle of x axis.

And answering your question about "complex regression models": I don't recognize this as a statistical term. I guess in your context it just means "more complex than the simple regression model" which is the first case you described.

Finally, one thing which attracted my attention: in the beginning of your question you say that the white circles represent latent variables. I guess you meant output variables which is a different thing than latent variable. The meaning of latent variable is easy to google so I won't explain the difference here.

Not the answer you're looking for? Browse other questions tagged regression probability nonlinear-regression intuition graphical-model or ask your own question.

11
Complex regression plot in R
5
How to perform an exponential regression with multiple variables in R
8
Problem understanding the logistic regression link function
1
identifying latent variables in this model
3
Fit a regression model to the data
5
How are graphical models “a subset of log-linear models”?
1
How are Multiple Linear Regression Lines Plotted?
0
Build a Generalised Regression Model Containing Linear and Non- Linear Predictor Variables with a Target Variable