An unreplicated nested design with repeated measurements: looking for a proper analysis

I want to analyse a data from a study which was not designed properly due to logistic reasons.

There are 3 plots, each has unique management type (see figure below).

At each of these plots several points were established (i.e. nested within plot and management type); at each point in several years richness and abundance of bird species were assessed. 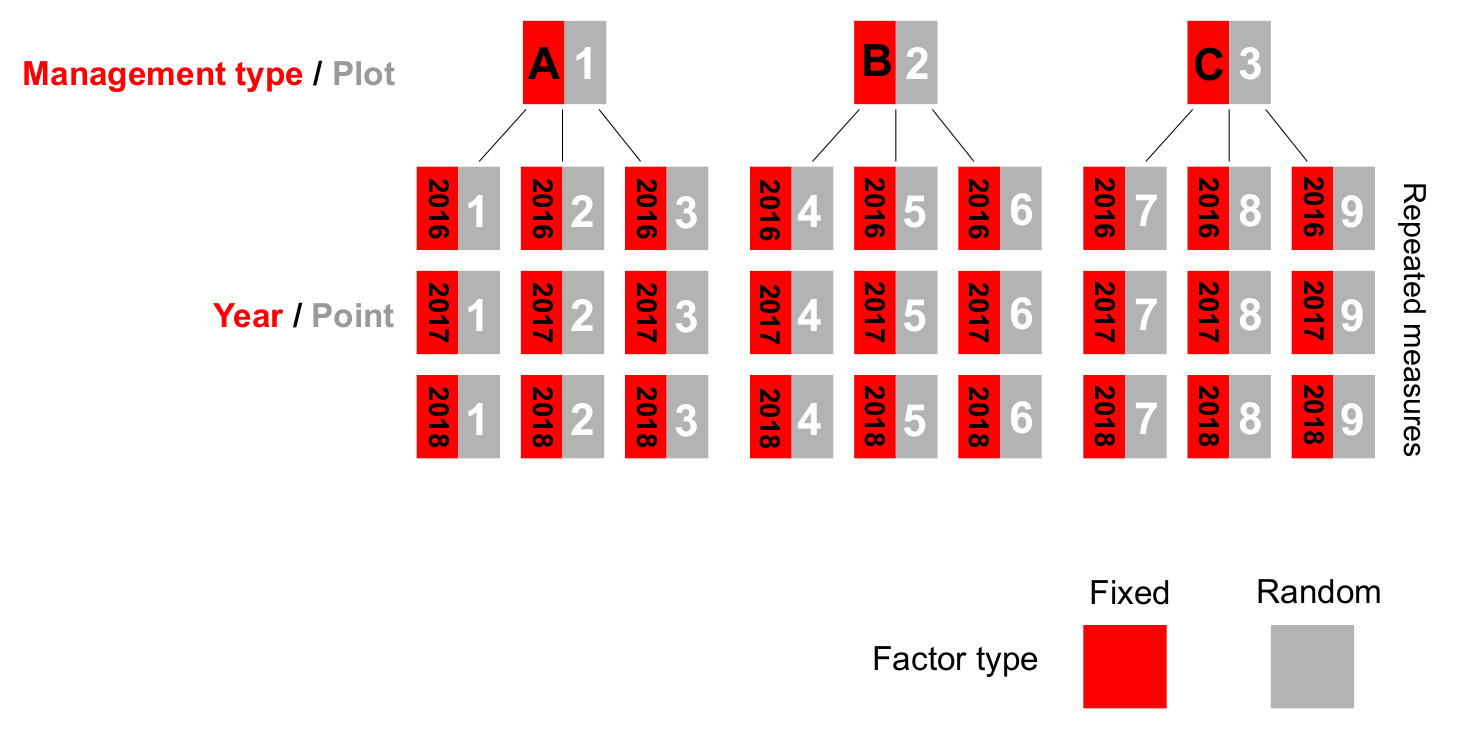 I would like to know which is the best method (and model formula) to analyse these data. Specifically, I wonder it is possible to add plot and point identity as random factors into the model as those are only pseudo-replicated.

EDIT: Design described in this question is similar to my, with one exception that my points assigned to one management type, i.e. "subjects" in that question, can be spatially autocorellated as all come from same plot.

You can add a random effect for point, as this is the experimental unit that is repeatedly measured. However, I'm afraid you cannot attribute the differences in the number of birds to either management type or plot, since these coincide.

You could proceed by only including a fixed effect for management type under the (strong) assumption that each plot is identical and list this as a shortcoming of the study. Better would be to collect more data, assigning management types differently, since someone else might argue that management type has no effect and that the differences are due to the original differences in plots, or something in between. Had the management started after the study began, you could have argued that 2016 was a baseline measurement of the plots.

You didn't specify your research question, but there is one last option if your interest isn't in management per se: Assume that each plot has its own (slightly different) management, carried out by someone else anyway. In this case, you could argue that the effect of management is simply part of the effect of plot and only use a nested random effect plot / point without a fixed effect for management type.

If bird abundance refers to a count, you should look into GLMMs for discrete distributions, such as the Poisson, or negative binomial. If these counts are zero-inflated, try a generalized additive model with mixed effects. The package mgcv comes to mind.

Once you have decided on your approach, have a look here for how to specify the mixed effects and (see the second answer) how to write that as a mathematical formula.

Not the answer you're looking for? Browse other questions tagged mixed-model repeated-measures random-variable experiment-design model or ask your own question.

2
What is the proper ratio of mean squares for a two-level nested ANOVA?
1
Repeated measures, mixed model, ANOVA or…?
43
Using lmer for repeated-measures linear mixed-effect model