Modeling distribution on a dart board

I have statistics for a game similar to lawn dart (3 concentric rings instead of 2) and I wanted to simulate shot distribution. What statistical distribution could I use?

The game is throwing a magnet at a mini fridge with 3 concentric rings. We have 3 players that play this game and I have been collecting data on it for fun. If the outer ring has radius 1 then middle ring has radius of 0.368 and inner has radius of 0.105. Hitting a ring is worth 10, 25 and 50 points respectively. At this point I record the point outcome of the game and each individual shot on the board (which point value) which gives me shot percentage. Outer ring is hit 57.35%, middle ring is hit 7.84% and inner is hit 0.98%.

What I want to do with this is make a model using some statistical distribution that will generate an (x, y) coordinate based on player performance. Then simulate a few round robin style tournaments, etc... and in general predict outcomes and see if the real stats match to the simulated stats. The issue is that using a Gaussian distribution doesn't give an accurate enough estimation of the performance of the players. It can approximately fit 2 of the 3 statistical points but does not seem to fully characterize the distribution. Is there a better curve/method of fitting this data?

According to Schwartz 1, the Rayleigh distribution has been used to model the distribution of bullets hitting a target. The model assumes the bullet hits are gaussian distributed along the target’s horizontal axis. Likewise and independently, the bullet hits are gaussian distributed along the target’s vertical axis. The two distributions are centered on the origin (center) of the target and their mutual population standard deviation is $\sigma $. For darts hitting a dart board, the model is the same. Obviously, gravity would cause a downward bias, but it is either neglected in the model or perhaps is considered to be a correctable issue. Either way, it is not considered further.

Now consider the following figure, which depicts the target and two circles, with radii $r_1$ and $r_2$, centered on the origin. 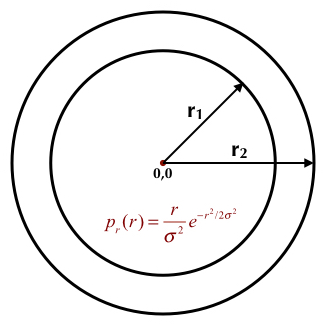 Not the answer you're looking for? Browse other questions tagged distributions predictive-models or ask your own question.