I'm trying to learn when I can use t-test if data set is not normal "enough".

Here are the things that I know, please verify:

From here, they say:

It is helpful to note that as the sample size n increases, the T ratio: $$T = \frac{\bar{X} - \mu}{s/\sqrt{N}}$$ approaches an approximate normal distribution regardless of the distribution of the original data.

Question 1: How does the equation for $T$ approach normal distribution?

Question 2: What is the "statistical power" that people talk about? Does it give information about how many sample sizes that I need to have a meaningful result from t-test?

Question 3: Is there any way to determine sample size needed for t-test? Like, if you have skewness of $x$ and kurtosis of $y$, you need $n$ sample size for the result from t-test to be valid, even when your data is non-normal

So the power is about 89%. Obviously, in this simulation the t statistics computed by t.test and captured using $-notation do not have Student's t distribution with 19 degrees of freedom. 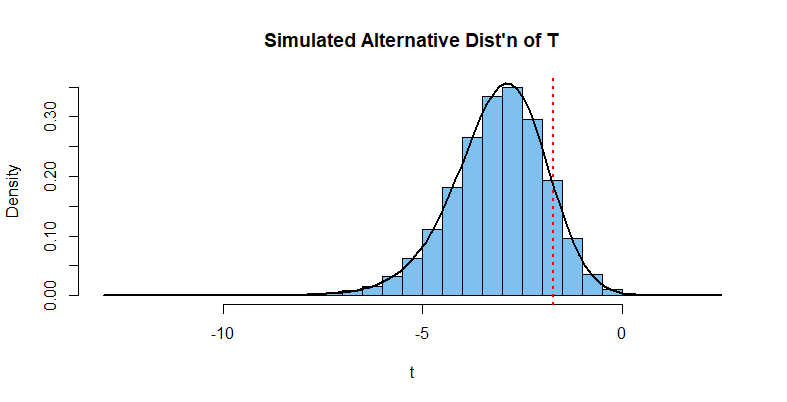 The actual distribution of the t statistic $T$ is a noncentral t distribution with 19 degrees of freedom and noncentrality parameter $\lambda = \sqrt{n}(\mu_0 - \mu_a)/\sigma = -2.9814,$ the density function of which is plotted above.

This means that we can find the exact power $0.8902$ in R, without simulation, using the code below:

Thus by using the noncentral t distribution, you can make a power curve, showing the power against a sequence of alternative values $\mu_a.$ Also, by trying various sample sizes, you can find the $n$ required to achieve the desired power against a particular alternative.

However, if your data are not normal, then neither the regular nor the noncentral t distribution is applicable. It may be difficult to find a formula for the exact power. Nevertheless, you can use the simulation method with appropriate distributions to find approximate power. Similar simulation methods could be used to investigate the power of a nonparametric test.

Addendum. (1) Using a Wilcoxon signed rank test instead of a t test with 20 observations from a normal population.

Suppose you worry that normal data are not normal and use a one-sample test instead of a t test. What happens to the power? We use the same null and alternative hypotheses above, and seek power against the alternative that the distribution is centered at 100.

(2) Using a Wilcoxon signed rank test instead of a t test when 20 observations are from a moderately right-skewed distribution.

The following simulation illustrates that with $H_0: \mu = 110$ and $H_a: \mu < 100$ a t.test at the 5% level, using such slightly skewed data, has power about 88% against the alternative $\mu_a = 100.$ Similarly, a Wilcoxon signed rank test also has power about 88%. So for 20 observations from the moderately skewed population mentioned above, the t test loses its slight power advantage over the Wilcoxon test.

The first iteration in each simulation is shown below:

This has been discussed at length on this site. The t-test is not very robust to skewness. For example, with the log-normal distribution a sample size of 50,000 is not large enough for the t-based method to be sufficiently accurate. The Wilcoxon signed-rank one-sample test does not test a median. The Wilcoxon-Mann-Whitney test is a two-sample test. The Wilcoxon tests are 0.95 as efficient as the t-based methods if normality holds, and can be arbitrarily more powerful than this parametric counterpart when normality does not hold. I suggest reading an intro nonparametric statistics book.

How does the equation for 𝑇 approach normal distribution?

Well, that it isn't quite true. The sampling distribution for that statistic approaches a standard normal in the limit as n grows large. That is very different. T

What is the "statistical power" that people talk about? Does it give information about how many sample sizes that I need to have a meaningful result from t-test?

Power is the probability of correctly rejecting the null hypothesis when it is false. If there really is a difference between groups, then a high powered test will correctly identify that there is a difference upon repetition of the experiment.

Power is an essential part of a sample size calculation. The sample size depends on a few other things (namely the effect size and the noise in the data), but generally speaking more power requires more samples (all else constant).

Is there any way to determine sample size needed for t-test? Like, if you have skewness of 𝑥 and kurtosis of 𝑦, you need 𝑛 sample size for the result from t-test to be valid, even when your data is non-normal

Not to my knowledge. The equations for sample sizes lean heavily on the assumptions of the t-test, and so I don't think there are formulae which make use of higher moments.