I want to calculate $p$-values by using the statistics program R.

But I'd get the same $p_1$ for any Covariance-Matrix with diagonal elements equal to 1 and this obviously seems kinda false since the correlation between the test statistics aren't considered. But I actually don't know how else to calculate the $p$-value. So any advice would be helpful.

I'm not very good at drawing in 3 dimensions, so here is a 2D view of what you're calculating with that definition of $p_1$: 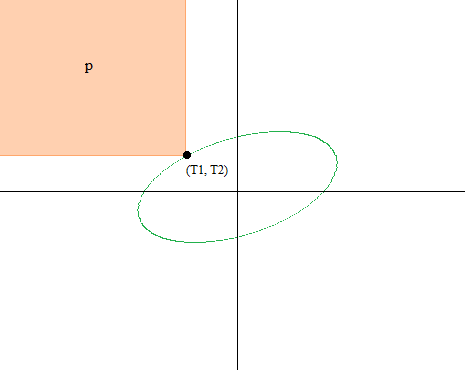 This is a rectangular region going to infinity and just touching the observed point $(T_1, T_2, T_3)$ at the corner. While that is certainly a value that can be calculated, it is not particularly meaningful.

It is much more common to construct a hypothesis test by calculating something like this: 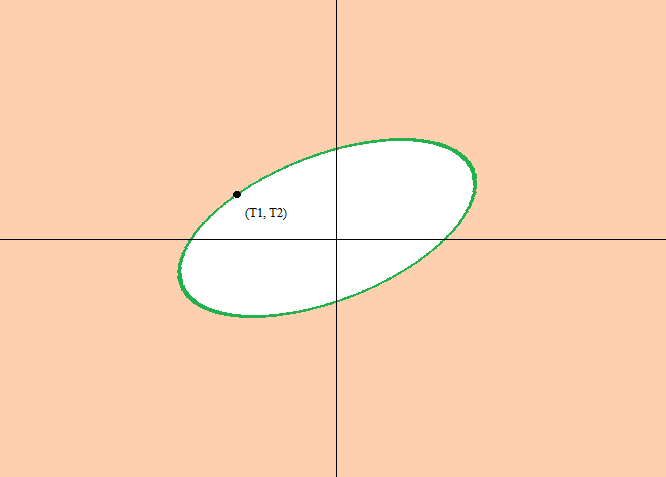 The formal test statistic is then:

Of course, only you can know exactly what hypothesis you want to test. I'm just showing you one common way that other people have approached this problem, but I can't know your specific situation in detail; I'm just guessing. Think carefully about which definition is most useful for what you are trying to accomplish!

Not the answer you're looking for? Browse other questions tagged mathematical-statistics or ask your own question.

2
Variance of a sum of identically distributed random variables that are not independent
6
General hints regarding the use of the binomial distribution in conditional probabilty problems
0
Serial correlation structures with two nested random intercepts
2
Proof Verification: Joint variance of the product of a random matrix with a random vector
2
Doubt about proof of positive semi-definite matrix implies covariance matrix
3
Joint distribution from multivariate Normal distribution