Now suppose we have a simple structural equation like this:

where $e$ is completly exogenous. We don't know anything else about the model.

How can we write this model in a DAG?

EDIT Moreover I have some sub-questions:

2a)If it exist, the causal nexus among $x$s become relevant?

2b)If it not exist, is still possible to identify the causal parameters $\beta_1,...,\beta_k$?

Your model statement specifies a class of DAGs, not a single DAG. That is, all DAGs in which $x_1, \dots, x_n$ are direct causes of $y$, and $e$ is exogenous are DAGs compatibles with your assumptions.

For instance, for simplicity, say we have only $x_1$ and $x_2$. Then, among several other alternatives, the following DAGs would be compatible with your model specification: 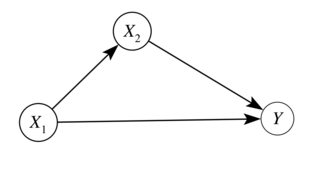 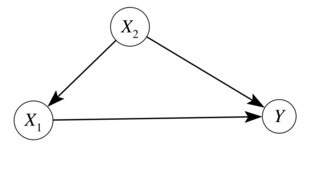 But the following DAG would not be compatible (since the error term of $Y$ is correlated with the error term with $x_2$, but note in this DAG the causal effect of $x_1$ is still identified):

Not the answer you're looking for? Browse other questions tagged causality dag or ask your own question.

7
Omitted variable bias: which predictors do I need to include, and why?
23
Paradox in model selection (AIC, BIC, to explain or to predict?)
12
Causal effect by back-door and front-door adjustments
4
linear causal model

1
Why do we care about the joint distribution of the endogenous variables of a causal model?
6
What justifies adjusting for proxy variables in the DAG causal inference framework?
18
Is it appropriate to use “time” as a causal variable in a DAG?
8
Convincing Causal Analysis using a DAG and Backdoor Path Criterion
1
Pearl's Causal Inference In Statistics: Study Question 1.5.1
4
linear causal model
2
Linear regression, good and bad controls, omitted variable error, and causal graphs