I have a two-variable time series. There is a very strong nonlinear correlation between the two variables, so they can be thought of as:

At some point in time there is a mean shift $\Delta\mu$. A correlation plot of variable_1 vs variable_2 looks something like this: 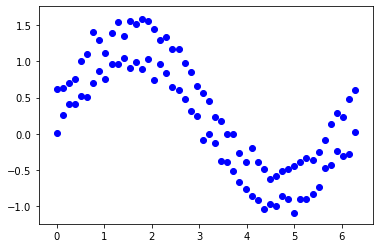 This shift is easy to see on a correlation plot, but difficult to detect in the time series with univariate change point methods, because the variation in the univariate time series is driven by $f(X)$, which obscures the mean shift.

Is there an approach that avoids explicit modelling of $f(X)$? If not, is there any way to define the training period in an automated way?

I have hundreds of these time series and cannot manually examine them all. The function $f(X)$ changes between datasets, as do the change points.

Browse other questions tagged time-series multivariate-analysis change-point segmentation or ask your own question.