Appropriate GLMM distribution for ratings data that are bounded and discrete

I am using a linear mixed model to explain variation in an object's ratings. These ratings are bounded between 0 and 10 [EDIT: see note below], and take only discrete values (example histogram of the raw data below). Note that the distance between values can be thought of as consistent across the scale (unlike in a typical Likert scale) i.e. the difference between 1 and 2 is about the same as that between 8 and 9.

I know that a normal distribution can be a useful enough approximation for discrete data in some cases, but I suspect that I need to use a generalized linear model for this.

What sort of distribution/link function would be appropriate for this type of data?

Edit: I should note that I am using a mixed model with random effects to account for non-independence due to multiple measurements by some individuals. My apologies for not including this detail earlier. 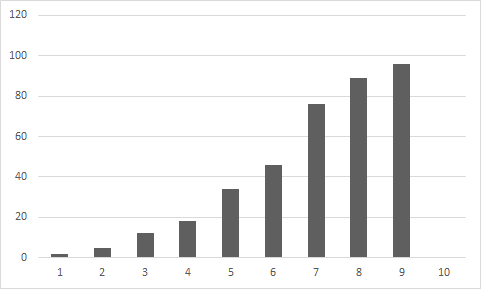 If you want a crude representation with a reasonable mean-variance relationship, a quasibinomial model would probably work OK: in R,

cbind(score,10-score) specifies to treat the response as a number of "successes" out of a maximum 10. Specifically, this means you'd be fitting a model with a predicted value of

where $x_i$ are your predictor variables and $\mu$ is the proportion out of 10. The assumed mean-variance relation is $V \propto \mu(1-\mu)$, which is reasonable since you expect the variance to decrease when the average score approaches 0 or the maximum value.

As pointed out in the comments, this does assume that the levels are in some sense "equally spaced" (although the logistic transformation does mean that it will take (for example) less difference in predictors to go from 4 to 5 or 5 to 6 than from 1 to 2 or from 9 to 10 ...) An ordinal model would add an extra $n-1$ parameters to quantify the distances between levels.

You could also treat your outcome as an ordinal variable and fit a mixed-effects model for this ordinal response. Ordinal mixed models are available in the GLMMadaptive package; for an example, check the vignette Mixed Models for Ordinal Data.

Alternatively, and if you do not have any missing data in your outcome (or the missing data that you may have can be assumed to be missing completely at random), you could also consider using generalized estimating equations (GEEs), either with a binomial family or an ordinal one. These are available in the geepack in the functions geeglm(..., family = binomial()) and ordgee(), respectively. The GEEs work under quasi-likelihood and include an over-dispersion parameter automatically.

Not the answer you're looking for? Browse other questions tagged regression distributions mixed-model generalized-linear-model glmm or ask your own question.

1
what kind of regression model I should use for integer and bounded dependent variable?
1
Alternative to GLMM for normalised ratio (Bounded: -1 to 1) response variable
1
Seeking appropriate distribution for bounded asymmetric continuous data *massed at the bounds*
10
Are $R^2$ for GLMM useful for modelers but not necessarily for readers?
4
How to handle bounded [0,1] dependent variable that causes one to fail heteroscedasticity
4
Which regression model distribution or transformation for data bounded between -1 and 1?