I have been learning how to draw the model prediction on a scatter plot, and noticed a bit counter-intuitive result. I would greatly help if you could kindly explain how I am mistaken here.

Let me explain my confusion using "grouseticks" data set embedded in lme4 package. I fitted GLMM and GLM to the same data set. The only difference between the two models is an inclusion/exclusion of the random effect, BROOD.

which indicates that the addition of the random effect "BROOD" substantially improves the predictive power of the model. Am I right?

OK, here's the thing. I tried to confirm the above result visually. What I have done is: 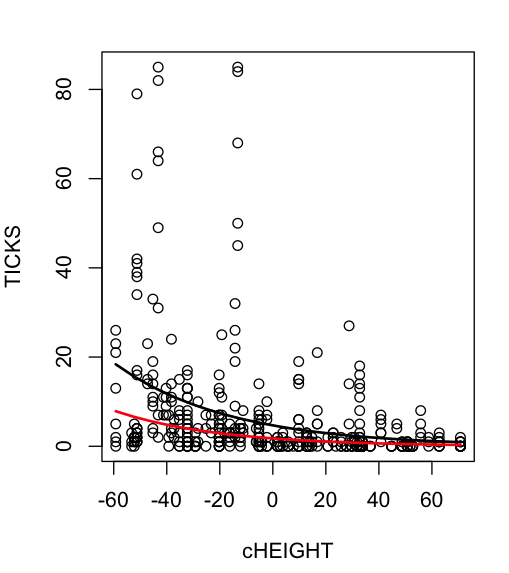 I don't see such a big improvement in fitting from GLM (black) to GLMM (red). Rather, it seems to me that GLM predict the no. of TICKS better than GLMM when cHEIGHT is low.

I suspected that somehow I might be using predict() function in a wrong way, and tried to use the estimated parameters from GLM and GLMM to predict the TICKS, i.e.

The results were completely the same with those obtained from predict(). Am I correctly performing the prediction? If not, please tell me how I am wrong, thanks.

I also calculated simple correlation coefficients between the observed TICKS and the model predictions. The predictions from GLM correlated slightly better with the observed data (r=0.3454) than GLMM (r=0.3442), although the difference was trivial. I guess this is not the standard way to compare the goodness-of-fit, but it is still counter-intuitive to me.

Thus, I don't see how the addition of random effect "BROOD" improved the model fit, indicated by Nakagawa & Schielzeth's (2013) R2m and R2c.

Thank you very much for your kind help!

I think, there is a misunderstanding regarding the meaning of the R^2 values. From the help of the package, you get the following information: Marginal R_GLMM² represents the variance explained by the fixed effects, and is defined as: R_GLMM(m)² = (σ_f²) / (σ_f² + σ_α² + σ_ε²)

Conditional R_GLMM² is interpreted as a variance explained by the entire model, including both fixed and random effects, and is calculated according to the equation:

That is, the left column simply reflects how much of the total variation is explained by the fixed effects. Conceptually, this is what you would refer to as R^2 in a linear regression context as well.

The right column gives you the estimate when you count the intercept variance as explained variance (which, strictly speaking, it is not because you could continue by adding level-2 predictors that explain differences in the intercept).

Putting this aside, you would not see the improvement in fit in the plot you created because you are doing an unfair comparison, comparing the predicted values of the GLMM to the raw data. Rather, you would need to "control" for the random effects, that is, you would need to subtract the individual random intercept estimates from the raw values and then look at the fit of these "corrected" values.

Some illustrations of this have already been provided elsewhere in the context of the LMM, and they apply here as well: What would be an illustrative picture for linear mixed models?

Does this answer your question?

I redrew the corrected figure, following the suggested link. The corrected R code is as follows.

Then I got this (the right graph is the corrected version). 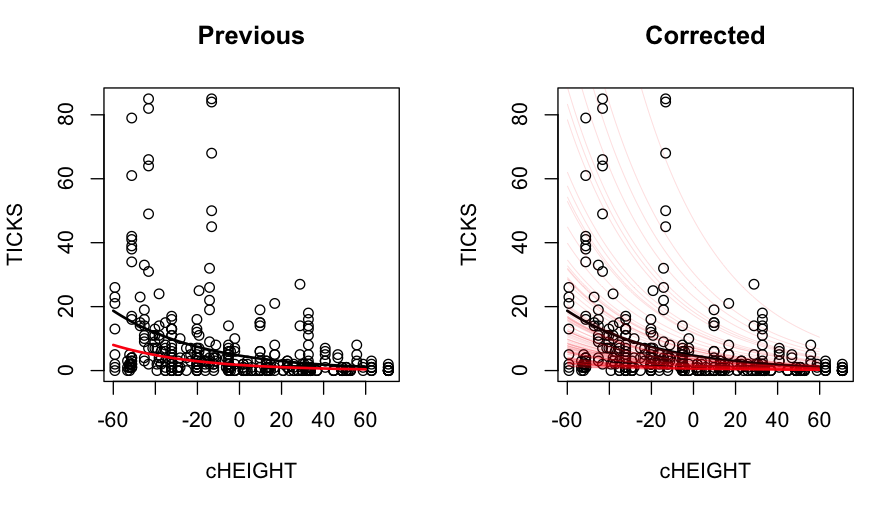 Not the answer you're looking for? Browse other questions tagged generalized-linear-model prediction glmm or ask your own question.

17
What would be an illustrative picture for linear mixed models?

11
OLS vs. Poisson GLM with identity link
14
How will random effects with only 1 observation affect a generalized linear mixed model?
3
Need an offset in GLMM even when it is almost invariable and an offset-free model yields a better fit?
7
Are $R^2$ for GLMM useful for modelers but not necessarily for readers?
1
Should modeled means in glmm be averaged on link or response scale?