Multi-leveled data, how to model? 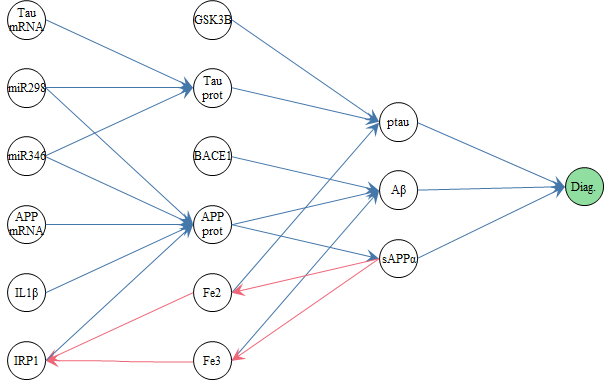 The green "Diag." is our outcome (diagnosis). It will be binomial (diseased/not), ordinal (not < not.path < mild < diseased), multinomial (not, not.variant, mild, diseased), or ordinal with 30 possible levels (a clinical scale--essentially can be treated as numeric). Everything else is to be directly measured by appropriate assays. Part of our model is that there is a feedback effect of Fe levels. By the way, this is a simplified version, since "Tau prot" also participates in specific localization of sAPPa but does not influence its levels. Fe3 influences aggregation of ptau, which can influence levels of tau by acting as a tau sink. Again, ignoring such complexities for now. The model here is to only reflect levels of the materials, not aggregation or cellular compartmentalization--that would be a later model to tackle.

More information: From prior experiments, we should expect many of the variables to violate assumption of normality. There may be violation of assumption of independence for all of the variables in the first column, especially since there may be feedback between IL1beta and IRP1 (at the very least). We will be testing the covariants of age, sex, and APOE genotype, all of which are known important covariates for this disorder.

So, what is the nuts-and-bolts recommendation on how to analyze this? I am already familiar with SEM, but does SEM handle the "retrograde" Fe connections? How does one deal with violations of normality or independence?

We would like to also deal with collection from different centers as a random variable, making it a multi-level model. If we are fortunate enough to get samples from multiple brain regions from all the same subjects, we'd also like to treat that effect as a random variable (individual subject).

Since you mention feedback I would suggest you view your system as evolving in time, namely a time series. In this case I would at least consider Sugihara's S-map and CCM methods and forget about the final diagnosis for a while. The advantage of these methods is that they are specifically aimed at data arising from dynamical systems. CCM tells you which variables are causative to your higher level observables (ptau, A$\beta$, sAPP$\alpha$), while S-map allows you to predict them. You might find out that many of the variables you measure are actually redundant. The downside is, of course, that you need to collect time-series data. If you want to test whether or not such methods are useful for said data, you need only collect time series of the observables mentioned earlier and see if they admit a low dimensional attractor ("have low embedding dimension"). This is done using the Simplex method - take a look at the first pages of this tutorial for the R package rEDM.

Not the answer you're looking for? Browse other questions tagged multiple-regression multilevel-analysis sem ancova or ask your own question.