I have a total of 29 data points for each sample. In addition, each sample value was independently generated.

My question is how do I go about using the t-test to either reject or accept the null hypothesis when from google they are so many different ways to calculate it?

Secondly, I assume the samples are independent because the second sample was obtained on a theoretical basis using a mathematical equation, the distance in meters is varied in steps of 1m from 1m to 29m in the Lfs term and the power is then recorded and shown in the figure below: 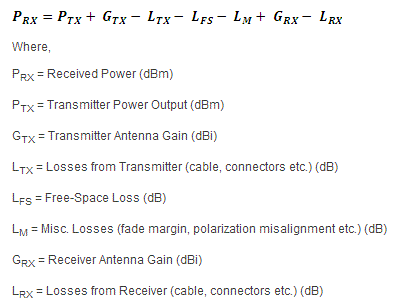 The second sample was determined by actual experimentation in the real world, where I purchased the equipment to actually see what results I obtained in the real world condition but the variables are not the same i.e. the GTX,GRX. The power received is also recorded in steps of 1m from 1m to 29m and is then shown in sample 1, is my assumption correct?

Below are the two sets of samples obtained. 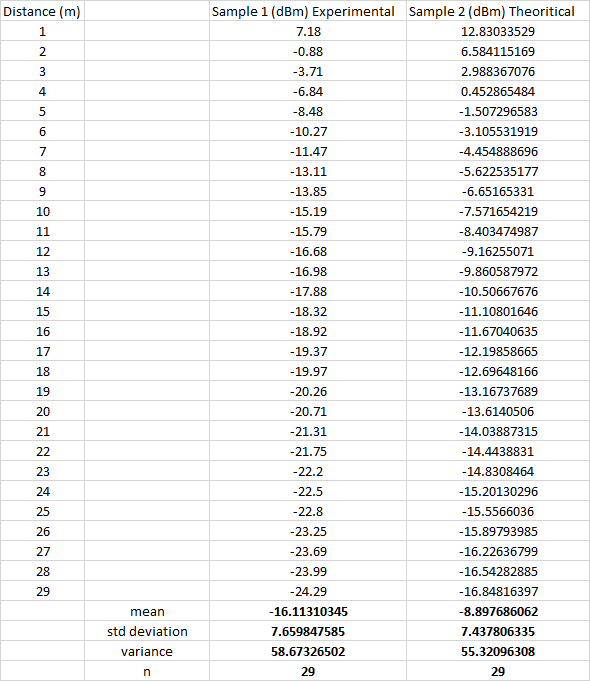 What I'm wondering now is if the best way to proceed is to do this as a regression problem where your regression equation includes the $P_{TX}$, $G_{TX}$, $L_{TX}$, $L_{FS}$, $L_M$, $G_{RX}$, and $L_{RX$} variables; an intercept term; and a categorical term that is 0 if the observation comes from the theoretical calculation and 1 if the observation comes from the experiment. You would then do your significance test on the parameter of the categorical variable.

The "t-test" that you mean is the two-sample t-test. If you can assume the populations have the same variance, you use the vanilla two-sample t-test. If you cannot make this assumption, you would use the Welch test, which is the default in R (common statistical software package). The one-sample t-test does not apply, since you are comparing two groups, and the paired t-test does not apply, since your two groups are independent of one another. A paired t-test would be used in a situation where you measure 29 subjects before and then again after a treatment (for example), which it does not sound like you did.

However, the t-test only examines means. That may be what you intend to examine, but it sounds more like your null hypothesis is that the distributions are the same, and you want to check if you have evidence of any kind to dispute that. For instance, if you have 29 subjects from N(0,1) and 29 subjects from N(0,2), the t-test would be inappropriate for determining if there are differences.

Not the answer you're looking for? Browse other questions tagged t-test or ask your own question.

6
Statistical test for power law samples
6
Empirical rejection rate of a wrong null hypothesis -is it the “power of the test”?
3
Normality, and when to use t-test vs. Mann-Whitney U-test?
8
Two methods of using bootstraping to test the difference between two sample means
4
Real-world example on significance testing with large samples
2
Does a two sample t test compare the means which each other directly or not?
1
t-test for differently-sized sample sets
0
T-test for two independent variable
8
Is the Wilcoxon rank-sum test a nonparametric alternative to the two sample t-test? Null hypotheses are different
1
Asymptotic distribution of independent two-sample t-test