Suggest a model for this dataset

I have a time series data set (the Old Faithful geyser data available here: http://www.gatsby.ucl.ac.uk/teaching/courses/ml1-2012/geyser.txt). Plotting the eruption duration on the x axis and the waiting time between eruptions on the y axis, the data looks like this: 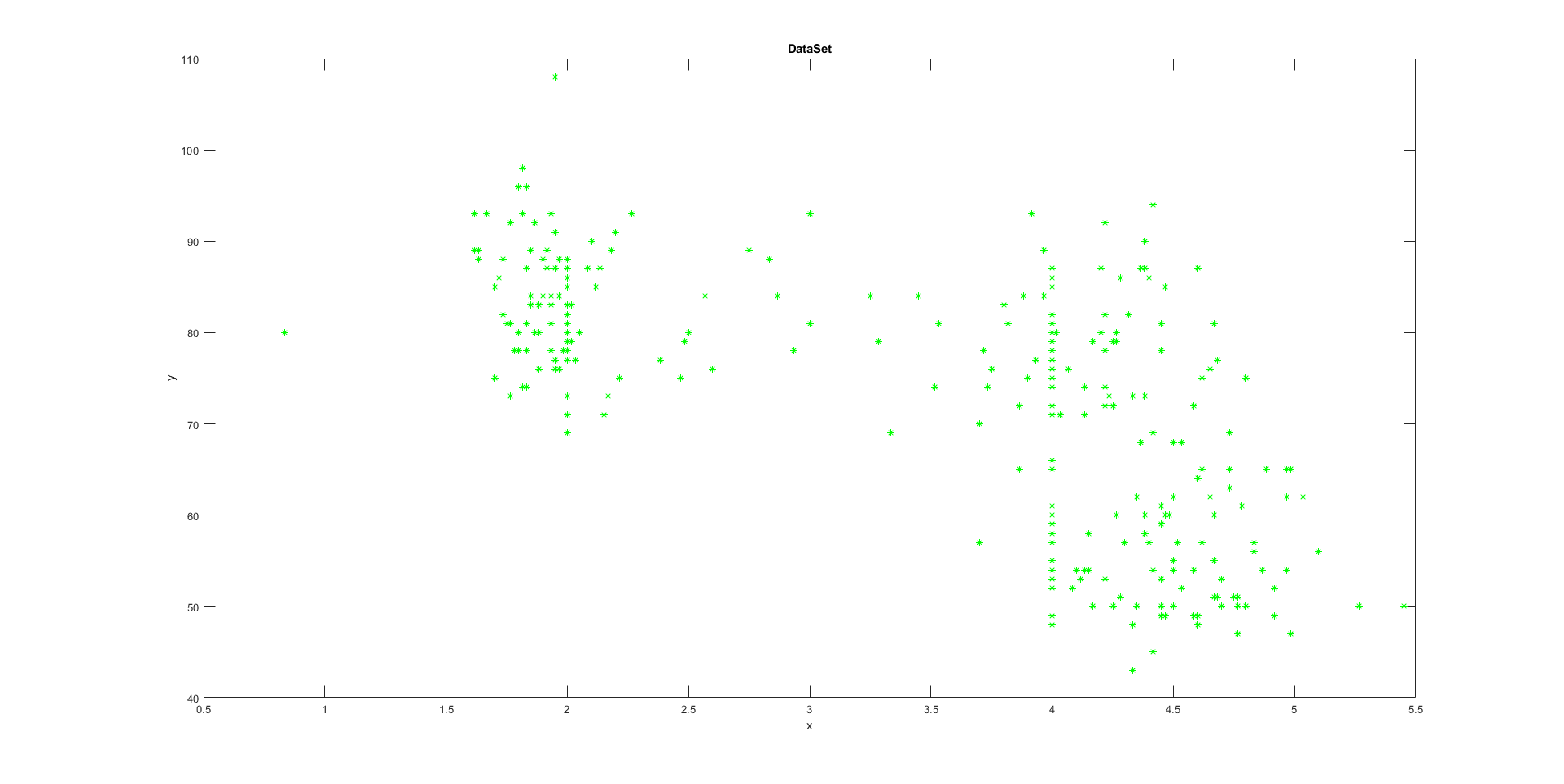 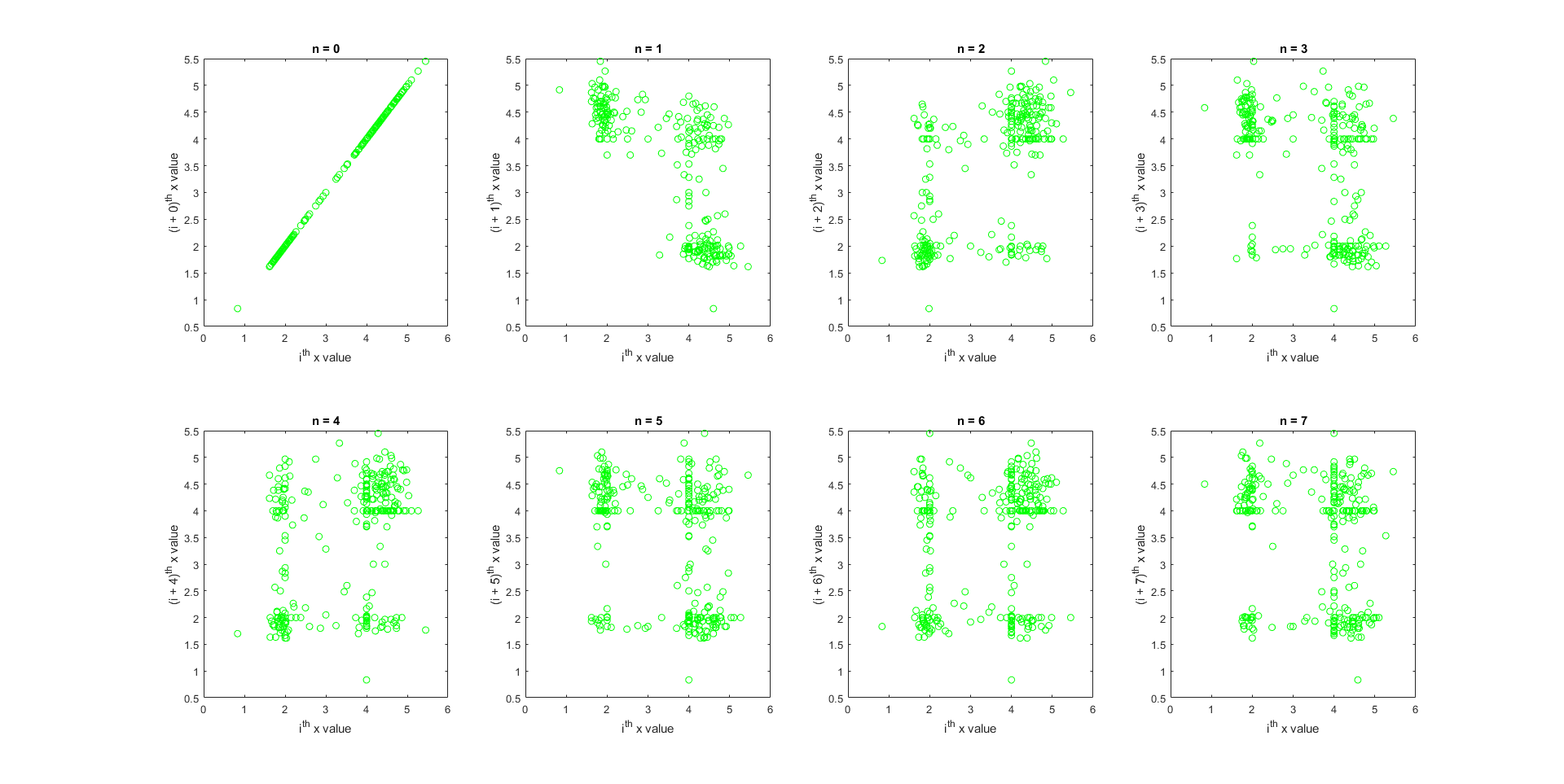 and to plot the x values against delayed y values (for different delay lengths n): 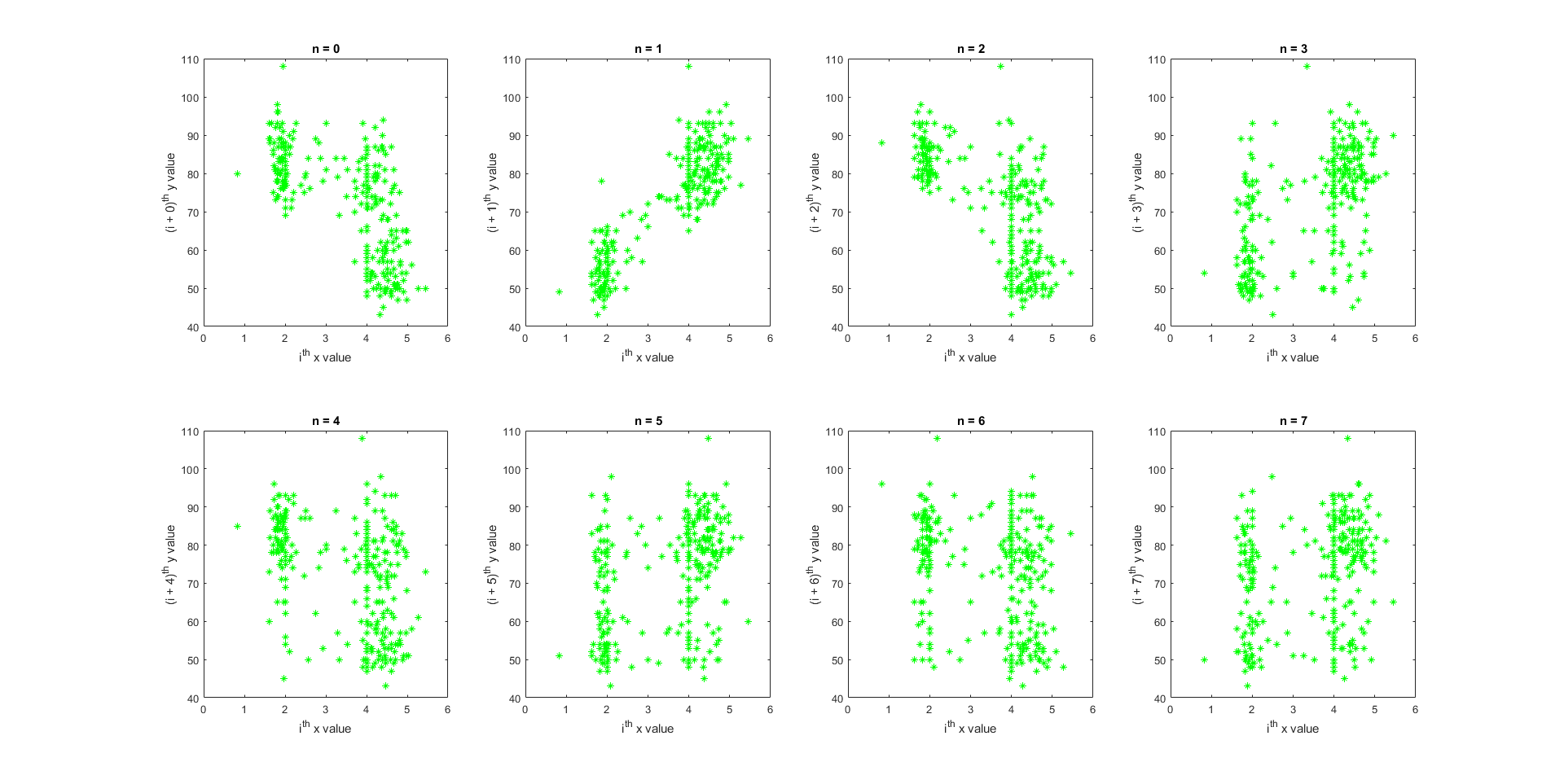 Based on these graphs, I need to recommend one of the following models:

So, I want to argue for an HMM. I think the latent variable should be able to occupy one of four states corresponding to the different cluster means we see in the delay graphs - the reason being that this would allow us to explain the long term trend in the time series. I think if each latent state corresponded to a cluster mean then the emission probability would just be a Gaussian centred on that cluster mean as this could generate the observed data.

(1) What do you think of my above explanation? Have I chosen the right model? Is my reasoning correct?

(ii) same argument above to get rid of Gaussian mixture model

Is that right? How to argue against the other three?

I have looked at data on durations of eruptions of Old Faithful geyser collected during the summers of 1978 and 1979. (There have been several earthquakes nearby since then, so the underground 'plumbing' of the geyser, and hence behavior of eruptions may be different now.)

Although 222 eruptions were observed, only 205 of them were adjacent pairs, and we focus on those. (Data were not collected at night.)

A histogram of durations is bi-modal. Somewhat arbitrarily, eruptions shorter than 3 min. in length are called Short (0) and others Long (1). We can model eruption lengths $X_i$ as a 2-state homogeneous Markov chain.

This is in good agreement with the 69.8% of long eruptions in the original data.

Notes: [a] I have heard theories (based on two underground reservoirs of hot water, with either one or both emptied in any eruption), but I have not seen them confirmed.

[b] I have seen regression analyses that attempt to predict the waiting time for the next eruption, based on the duration and waiting time for the preceding eruption. Predictions of waiting times between eruptions based on regression have been useful for park visitors, trying to view eruptions. However, to the extent that these regressions depend on independent sequences of events for the predictor variables, they may not be exactly correct---we have successfully modeled durations of eruptions as Markovian, not independent. Waiting times also seem not to be independent.

[c] The dataset I used is a classic one, with data collected by park rangers, reported in Weisberg, S. (1985), Applied linear regression, Wiley. Various websites have undertaken to report data on contemporary eruptions of Old Faithful geyser. I do not know what data you are using.

you have 272 values that are not taken at fixed time intervals THUS you data set is not a classic time series data set. I took your 272 values and plotted them ( as you did ) and obtained

. If you segment your data based upon time between (x) .. set 1 where X <64 AND SET 2 WHERE X>64 there is no relationship. Globally there is a relationship

but this is a classic case of a spurious relationship due to a concommitant effect and realized by pooling all the data.

I don't think , I was much of help other than identifying a few spurious data points i.e. outliers.

Not the answer you're looking for? Browse other questions tagged self-study markov-process hidden-markov-model gaussian-mixture-distribution multivariate-normal-distribution or ask your own question.

8
Why only the mean value is used in (K-means) clustering method?
5
Selecting the number of mixtures / hidden states / latent variables
10
When to use LDA over GMM for clustering?
27
Difference between Hidden Markov models and Particle Filter (and Kalman Filter)
4
How to use Kullback-leibler divergence if mean and standard deviation of of two Gaussian Distribution is provided?
3
Are there any examples of hidden Markov models that are not mixture models?
6
Gaussian Mixture for detecting outliers
2
Understanding the log-likelihood (score) in scikit-learn GMM
2
Can Gaussian Mixture Model Clustering tell me something about the distribution of my data?