We roll a 6-sided die a large number of times.

Calculating the difference (absolute value) between a roll and its preceding roll, are the differences expected to be uniformly distributed?

To illustrate with 10 rolls:

Would the diff values be uniformly distributed?

No it is not uniform

which gives a probability distribution for the absolute differences of

Using only the most basic axioms about probabilities and real numbers, one can prove a much stronger statement:

(An analogous statement for continuous variables is proven at Uniform PDF of the difference of two r.v.)

The idea is that the chance $X-Y$ is an extreme value must be less than the chance that $X-Y$ is zero, because there is only one way to (say) maximize $X-Y$ whereas there are many ways to make the difference zero, because $X$ and $Y$ have the same distribution and therefore can equal each other. Here are the details.

First observe that the hypothetical two variables $X$ and $Y$ in question can each attain only a finite number $n$ of values with positive probability, because there will be at least $n$ distinct differences and a uniform distribution assigns them all equal probability. If $n$ is infinite, then so would be the number of possible differences having positive, equal probability, whence the sum of their chances would be infinite, which is impossible.

Next, since the number of differences is finite, there will be a largest among them. The largest difference can be achieved only when subtracting the smallest value of $Y$--let's call it $m$ and suppose it has probability $q = \Pr(Y=m)$--from the largest value of $X$--let's call that that one $M$ with $p = \Pr(X=M).$ Because $X$ and $Y$ are independent, the chance of this difference is the product of these chances,

Finally, because $X$ and $Y$ have the same distribution, there are many ways their differences can produce the value $0.$ Among these ways are the cases where $X=Y=m$ and $X=Y=M.$ Because this distribution is nonconstant, $m$ differs from $M.$ That shows those two cases are disjoint events and therefore they must contribute at least an amount $p^2 + q^2$ to the chance that $X-Y$ is zero; that is,

showing the distribution of $X-Y$ is not uniform, QED.

A similar analysis of the absolute differences $|X-Y|$ observes that because $X$ and $Y$ have the same distribution, $m=-M.$ This requires us to study $\Pr(X-Y=|M-m|) = 2pq.$ The same algebraic technique yields almost the same result, but there is the possibility that $2pq=2pq+(p-q)^2$ and $2pq+p^2+q^2=1.$ That system of equations has the unique solution $p=q=1/2$ corresponding to a fair coin (a "two-sided die"). Apart from this exception the result for the absolute differences is the same as that for the differences, and for the same underlying reasons already given: namely, the absolute differences of two iid random variables cannot be uniformly distributed whenever there are more than two distinct differences with positive probability.

Let's apply this result to the question, which asks about something a little more complex.

However, this isn't really a difficulty. Since statistical expectation is additive and all differences have the same distribution, if we pick any possible value $k$ of the differences, the expected number of times the difference equals $k$ in the entire sequence of $n$ rolls is just $n-1$ times the expected number of times the difference equals $k$ in a single step of the process. That single-step expectation is $\Pr(\Delta X_i = k)$ (for any $i$). These expectations will be the same for all $k$ (that is, uniform) if and only if they are the same for a single $\Delta X_i.$ But we have seen that no $\Delta X_i$ has a uniform distribution, even when the die might be biased. Thus, even in this weaker sense of expected frequencies, the differences of the rolls are not uniform.

On an intuitive level, a random event can only be uniformly distributed if all of its outcomes are equally likely.

Is that so for the random event in question -- absolute difference between two dice rolls?

It suffices in this case to look at the extremes -- what are the biggest and smallest values this difference could take?

Obviously 0 is the smallest (we're looking at absolute differences and the rolls can be the same), and 5 is the biggest (6 vs 1).

We can show the event is non-uniform by showing that 0 is more (or less) likely to occur than 5.

At a glance, there are only two ways for 5 to occur -- if the first dice is 6 and the second 1, or vice versa. How many ways can 0 occur?

To illustrate this with simulated data, we can use a very simple R script: 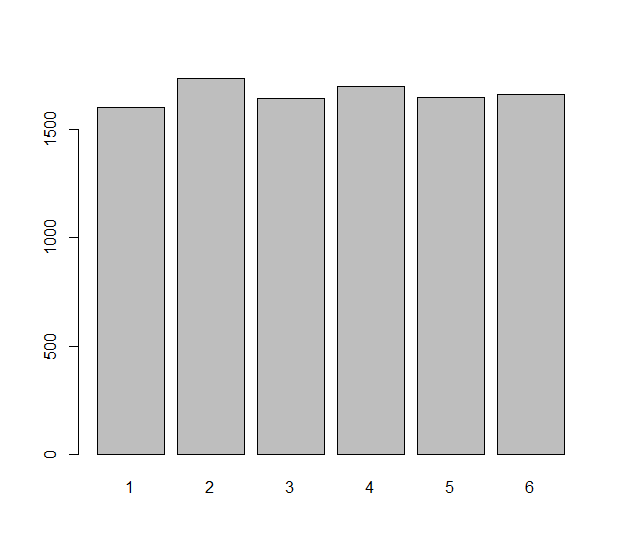 We see that this produces indeed a uniform distribution. Let's now have a look at the distribution of the absolute differences of two random samples from this distribution. 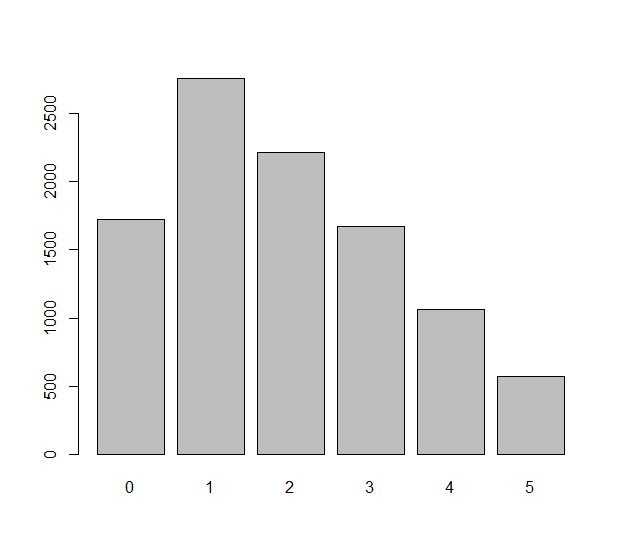 Others have worked the calculations, I will give you an answer that seems more intuitive to me. You want to study the sum of two unifrom r.v. (Z = X + (-Y)), the overall distribution is the (discrete) convolution product :

This sum is rather intuitive : the probability to get $z$, is the sum of the probabilities to get something with X (noted $k$ here) and the complement to $z$ with -Y.

From signal processing, we know how the convolution product behave: 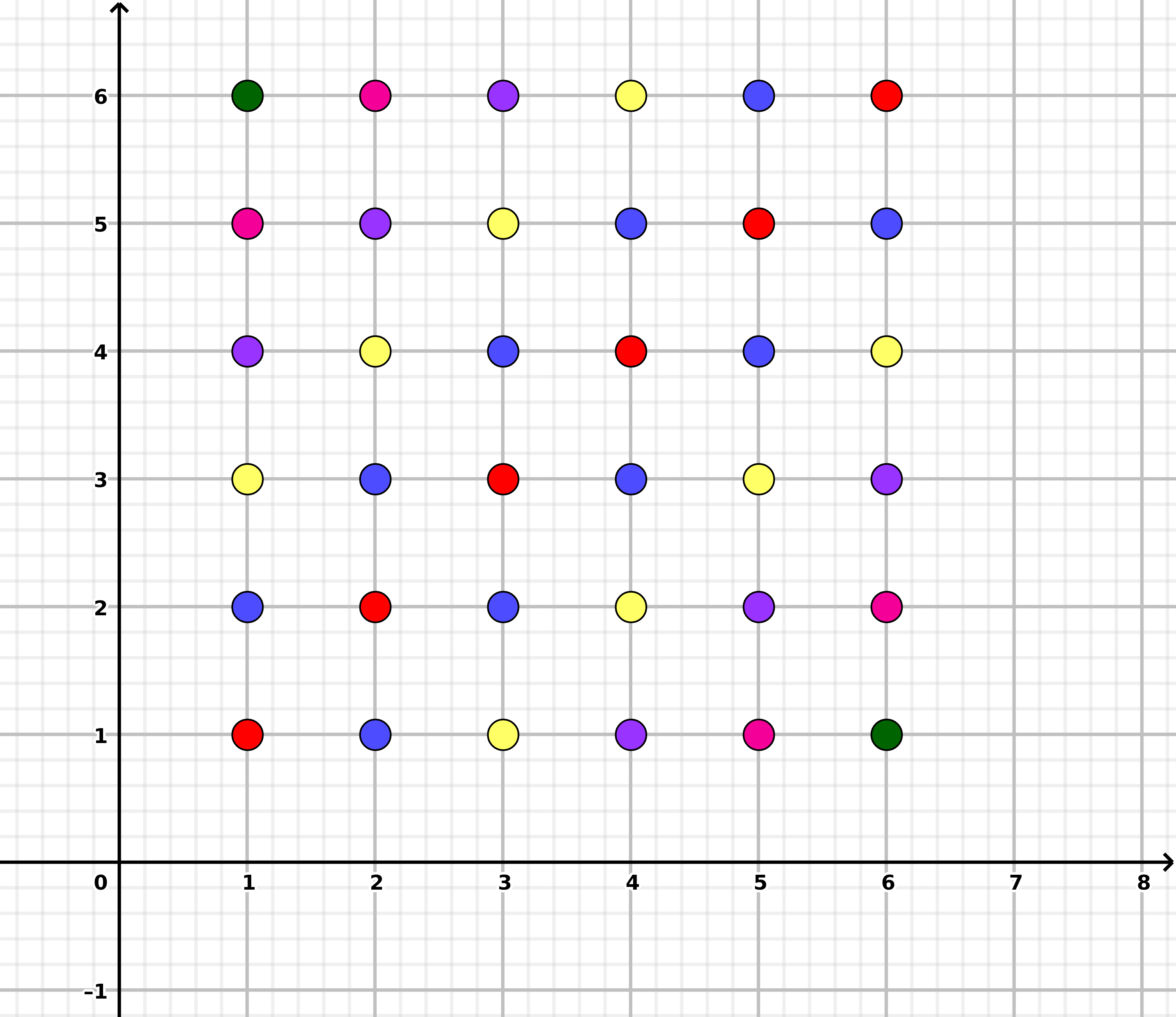 As you can easily see, the number of points for each color is not the same; therefore, the differences are not uniformly distributed.

So the function $P(D_t = d)$ is not constant in $d$. This means that the distribution is not uniform.

Not the answer you're looking for? Browse other questions tagged distributions uniform-distribution or ask your own question.

0
Convolution of two indicator functions
13
Uniform PDF of the difference of two r.v

7
What is the expected MINIMUM value drawn from a uniform distribution between 0 and 1 after n trials?
0
placing bets to maximize the difference between two random numbers
2
Variance of a continuous uniformly distributed random variable
6
Given a bounded number of die rolls following unif{1,6}, produce unif{1,7}
4
Expected number of rolls until a number appears $k$ times
0
How far from "even" is (or is not) significant?