Linear splines are easy to discuss. Knots are where the slopes change, and only one level of continuity is enforced.

Based on comments below, the best language I can think of at the moment is the following, for a general audience:

Knots are where different cubic polynomials are joined, and cubic splines force there to be three levels of continuity (the function, its slope, and its acceleration or second derivative (slope of the slope) do not change) at these points. At the knots the jolt (third derivative or rate of change of acceleration) is allowed to change suddenly, meaning the jolt is allowed to be discontinuous at the knots. Between knots, jolt is constant.

Knots are where cubic polynomials are joined, and continuity restrictions make the joins invisible. The function, its slope, and its acceleration (slope of slope; second derivative) do not change at a knot. But the rate of change of the acceleration (jolt; third derivative) is allowed to change abruptly at a knot.

It would still be nice if there is a simpler term not unlike "shape change" that could be used to describe this in addition to the technically correct wording.

Update: I added a graph showing a cubic spline function and its first three derivatives in Section 2.4.4 of my Regression Modeling Strategies course notes.

This answer on math.stackexchange.com suggests one way to proceed. In particular:

The typical mathematical definition of "smooth" says something about how many continuous derivatives the function has. But these sorts of definitions bear little relationship to the intuitive notion of "smoothness" of a curve.

Starting from the limitations of fitting an infinitely mathematically smooth (in the sense of infinite differentiability) high-degree polynomial might help heuristically. I'd suggest something like:

At knots the required level of mathematical smoothness is relaxed, better to match the intuitive notion of smoothness while allowing the curve to pass through the knots. The curve between each pair of adjacent knots can then be a simple, infinitely smooth, 3rd-degree polynomial. 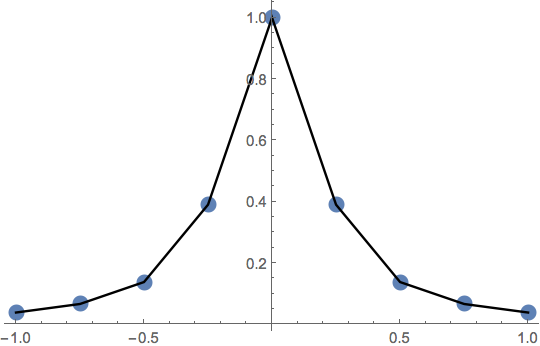 We want to fit a smooth curve to these points, to avoid the sharp changes in the line at the points. We could try to fit a curve that is infinitely smooth mathematically through these points, in the sense that not only is the curve continuous, but the slope of the curve is continuous, as is the slope of the slope, and so on forever (infinite differentiability). Polynomials are infinitely smooth in that sense, but here's what you get if you fit a polynomial through these points: 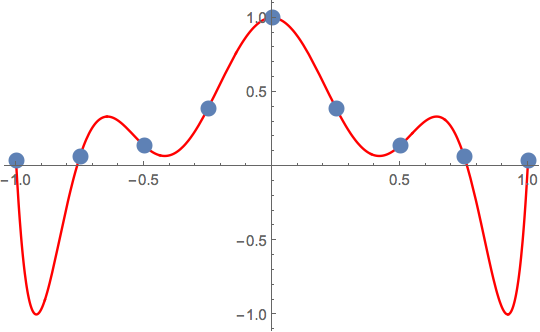 As @bubba has put it about the high-degree polynomials needed for this type of fitting:

No-one (except a mathematician) would call them "smooth".

If we remove the requirement for infinite mathematical smoothness at the knots, however, we can do much better. Then we can use an infinitely smooth 3rd-degree polynomial between each pair of adjacent knots, and at the knots require just the minimum smoothness needed to make the joins invisible: 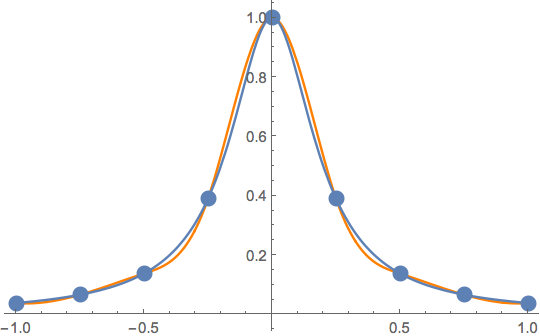 where the orange line is a cubic spline fit and the blue line shows the smooth Runge function from which the points were sampled. This approach provides "the least possible amount of wiggling in between" the knots and thus meets an intuitive sense of "smoothness."

Not the answer you're looking for? Browse other questions tagged splines or ask your own question.

53
Consider the sum of $n$ uniform distributions on $[0,1]$, or $Z_n$. Why does the cusp in the PDF of $Z_n$ disappear for $n \geq 3$?
1
Is it possible to define an optimal fit?
0
Questions re. fitting a polynomial: Runge's phenomenon solutions
0
How to make part of data entries more important for regression model

11
How are piecewise cubic spline bases constructed?
1
'Punishment Function' in Number of Knots in Splines?
5
What is the fitted model for a smoothing spline?
7
Knots in Smoothing Splines
9
Why are natural splines almost always cubic?
3
DOF of Natural Cubic Spline
0
ISLR splines - degrees of freedom confusion?
3
What is the relationship between knots and cubic spline basis functions in GAMs?