For example, we want to use age and IQ to predict GPA.

Of course we can do a multiple linear regression, i.e. regress GPA on age and IQ.

Note at first I understood your question as 'making multiple regressions with one variable' this gives rise to part 1 in which I explain the effect of an interaction term. In the image of part one the left image relates to doing six different simple regressions (a different one for each single age class, resulting in six lines with different slope).

1 Difference due to interaction term

Below is a sketch of a hypothetical relationship for GPA as function of age and IQ. Added to this are the fitted lines for the two different situations.

For instance in the hypothetical case below the increase of GPA as function of increase in IQ is not the same for each age and the effect of IQ is stronger at lower age than at higher age. 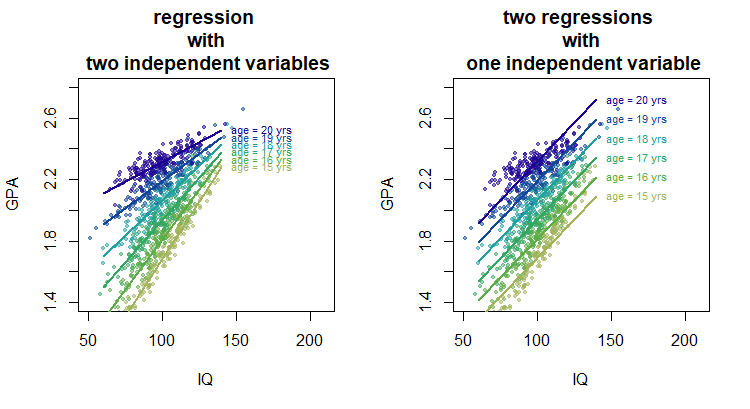 2 Difference due to correlation

What if IQ and age are slightly correlated in practice?

The above explains the difference based on the consideration of the additional interaction term.

When IQ and age are correlated then the single regressions with IQ and age will partly measure effects of each other and this will be be counted twice when you add the effects together.

You can consider single regression as perpendicular projection on the regressor vectors, but multiple regression will project on the span of vectors and use skew coordinates. See https://stats.stackexchange.com/a/124892/164061

The difference between multiple regression and single linear regressions can be seen as adding the additional transformation $(X^TX)^{-1}$.

3 Difference due to unbalanced design

The effect of correlation is particular clear when the experimental design is not balanced and the independent variables correlate. In this case you can have effects like Simpson's paradox.

Code for the first image:

To explain a little more. Multiple regression tests for the unique contribution of each predictor. So let's take your example and assume that IQ and age are correlated.

If you run a regression with IQ only the contribution of IQ can be visualized like this (red part): 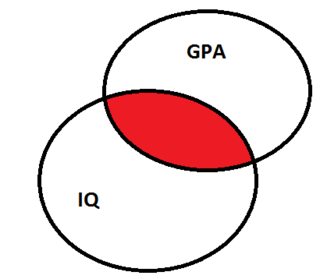 But once you add age to the analysis, it looks something like that: 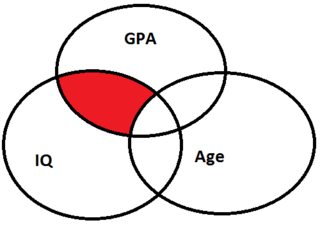 As you can see the unique contribution (red part) of IQ is smaller, hence beta for IQ will dicrease in this analysis.

I hope this makes it clear why both analysis answer different question: First analysis, using only IQ as the predictor, tells you how much IQ contributes to predict GPA in total, while in the second analysis you can see the unique contribution of IQ to explain variation in GPA apart from age.

Keep in mind, that this is a simple exmaple and there can be other things going on like moderation, mediation or suppression which can change your interpretation of the results.

You can do that. It answers a different question.

If you include both independent variables then the results for each are controlling for the other. If you do them separately then they are not.

What this would do is answer drastically different questions.

In the first case you would not be taking into account the impact of certain factors such as wealth, gender, ... into account when looking at at the age coefficient on IQ.

If for example, there is a disproportionate number of wealthy young people, that can have access to better education, better nutrients ... that will be implicitly absorbed in your "age" coefficient of your 1 independent regression variable. The regression might show that young people are "smarter", which might be true given your dataset, but the underlying factor might be attributable to wealth instead.

Your question says "Which method is better?". Better what for? If you want to predict GPA you might want to use both variables. If your question is about the relation between IQ and GPA, then you have no reason to add age to the Model. Hence, it depends on your research question what Model suits better. One point that appears unmentioned, is that not only beta but also the p values can change after addition of another predictor, leading to another interpretation of the results.

10
Intuition behind $(X^TX)^{-1}$ in closed form of w in Linear Regression
9
Is there an elegant/insightful way to understand this linear regression identity for multiple $R^2$?
1
Question on the Friedman test and statistical significance