If $x$ is an irrational number and $b$ an integer, let's define

Here $k=1,2,\cdots$ is an integer. The brackets represent the fractional part function. The function $g$ is the empirical correlation computed over all $n=1,2, \cdots$. I asked whether one can prove that $g(x,k) = b^{-k}$. I also asked if there are some irrational numbers $x$ for which this equality is NOT true. I believe, based on my knowledge about mathematical chaos theory, that there are infinitely many exceptions, but these exceptions are extremely rare (among irrational numbers) and not easy to find. I initially posted the question on MSE, here. A potential exception is the irrational number $x =0.10100100010000100000\cdots$ in base $b=2$.

I eventually posted a partial answer myself, and along the way, found (using empirical evidence, no formal proof) that if $b=p/q$ where $p,q$ are strictly positive integers, and $\mbox{gcd}(p,q)=1$, then $g(x,1)=\frac{1}{pq}$. This can be used trivially to solve the general case $k>1$.

I am curious to see if someone might be interested in this problem, and provide more a formal answer, not based on empirical evidence only.

I was asked to clarify what I meant by correlation, since the system is deterministic and involves infinitely many terms, resulting in potential convergence issues. Let $X_n = \{nx\}, Y_n=\{nb^k x\}$ and then define the following quantities:

If $b$ is irrational, and $b^k x$ and $x$ are linearly independent over the set of rational numbers, then $g(x, k) = 0$. This fact seems trivial to me, and confirmed by empirical evidence, but could be extremely difficult to formally prove.

We are dealing with what I call $b$-processes in my article about the Theory of Randomness, see here.

From a statistical point of view, there are two interesting ideas in this question. The following discussion characterizes them as (1) the behavior of correlations under "tessellation" (which I will define and illustrate) and (2) random-like sampling of circles using a systematic sample. These ideas lead to a proof of a generalized result (stated at the end of this post). It is noteworthy that these ideas are quite different from each other. The first is purely algebraic while the second is an application of the ergodic theory of circular rotations: that's where the randomness lies.

Throughout this post I have made efforts to state and explain only as much as is needed to follow the ideas, with very few discursions--you may wish to fill in some details. I am going to develop the first idea first. Its applicability will only gradually become apparent as we investigate the second idea. Because this idea of tessllating a distribution might be novel, I supply more computational details in the first section.

Let $(X,Y)$ be any bivariate random variable, such as the one illustrated here with a contour plot of its density (which is supported in the unit square--but that's not a necessary assumption): 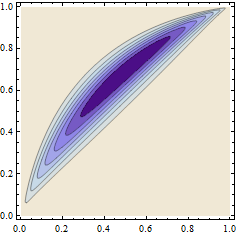 Figure 2. This illustrates the case $p=3$ applied to the distribution in the first figure. The density contours now, of course, are just $1/3$ as high as before.

Suppose $(X,Y)$ has finite second moments (which is the mildest condition needed to apply standard correlation formulas) and has correlation $\rho.$

This has a pretty answer that can be found using basic calculations. For completeness, the details follow, but I invite you to skip directly to the end of this section (to the highlighted lemma) unless you find yourself so sceptical that you need to check the details.

for all numbers $\alpha,$ compute

In a similar fashion (but more easily),

Finally, it's trivial that

Applying these results to the formula for correlation, we find 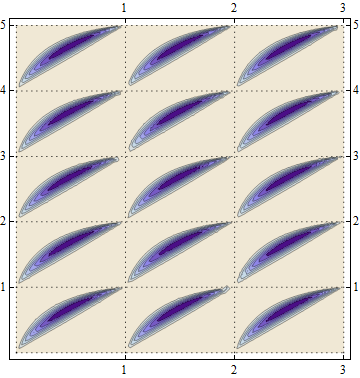 This sometimes simplifies, as it will in the main application later:

This corollary is non-vacuous, because you can begin with any random variable $(X,Y)$ with finite moments and rescale its components to make the resulting variances both equal $1/12.$

The (Euclidean) circle is the topological group $$S^1 = \mathbb{R}/\mathbb{Z},$$ which covers the circle via the map that takes the fractional parts of numbers,

As in any group, the order of an element $\{x\}$ is the smallest positive integer $n$ for which $n\{x\}=0.$ The order is infinite when no such integer exists. From elementary properties of real numbers it is clear that the rational numbers $\mathbb Q$ are those real numbers $x$ for which $\{x\}$ has finite order in $S^1.$ Letting $q$ be that order, it follows that $x=p/q$ for some integral $p.$

The ergodic theorem implies that for any given $a$ and $b$ this fraction has a limit as $n$ grows large and that limit is the length of the interval,

When we systematically sample the circle by starting at any fixed point $p$ and step off in equal steps of size $dt$, then either (a) the sample starts repeating itself endlessly when $dt$ has finite order or otherwise (b) when it is sufficiently large, it provides an excellent approximation to the uniform probability distribution on the circle.

returns to the starting point, heading in the initial direction. (If $\xi=0,$ set $t=q/\eta$ in the preceding calculation). When $p$ and $q$ have no common divisors, $t=q/\xi$ is the first time the geodesic returns to its origin. The image is a $(p,q)$ Torus knot, which can be illustrated with this distorted (non-flat) torus: 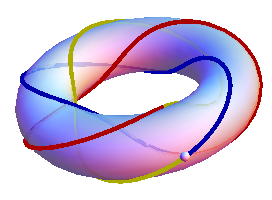 The same path can be more clearly shown--albeit with visual breaks--in the coordinate system of $T^2,$ which is the square $[0,1)\times [0,1)$ designating all ordered pairs of fractional parts of real numbers: 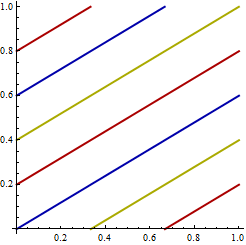 When the image of a geodesic is a circle, the ergodic theorem applies: we may systematically sample it by starting at its origin and stepping out equal distances $dt$, provided $dt$ is not a rational fraction of the length of the circle.

Figure 6. The gray lines in all four panels depict the same geodesic as before. Starting at the origin, points in the panel at left have been spaced equally along the geodesic--coloring them as before to help the eyes keep track--until the origin has first been crossed (where the color turns to green). The even spacing is a crude but decent approximation to the uniform distribution along the geodesic. The next panels repeat this process, showing how the points fill the geodesic more and more densely as the sample size grows. As is evident in the second panel from the left, the points might not be very uniform over small distances, but the progression from left to right shows how those local non-uniformities eventually get smoothed out.

Statement and proof of the results

The dashed lines in Figure 6 are drawn to remind you of figures 2 and 3, showing tessellated distributions. Indeed, it should be clear that such a diagram of any $(p,q)$ torus knot originating at $(x_0,y_0)=(0,0)$ can be subdivided into $pq$ similar rectangles along the vertical lines at $0, 1/p, 2/p, \ldots, 1$ and the horizontal lines at $0, 1/q, 2/q, \ldots, 1.$ This exhibits the uniform distribution along the knot as a tessellation of the uniform distribution along the diagonal of the bottom left rectangle.

We have the desired result, once we make a few more mopping-up observations, all of which are obvious (I hope) and easily proven:

Putting these results together and specializing to an origin of $(0,0)$ (simply to avoid complicating the statements), we conclude the following:

Applying this result to $\xi=1,\eta = b^k$ produces the speculated conclusions of the question. Except as explicitly described in (1), there are no special exceptions. In particular, when $b$ is irrational conclusion $(1)$ applies and otherwise the only numbers $dt$ ("$x$" in the question) that do not yield result $(2)$ are the rational multiples of $\sqrt{1+b^{2k}}.$

(This result omits the case of systematically sampling a $(p,q)$ knot by a rational fraction of its length. Such samples repeat their elements over and over and so clearly attain limits. It's a simple, although potentially fussy, question of arithmetic to work out what the limiting correlations are. They can differ greatly from $1/(pq);$ they needn't even have the same sign.)

Finally, it's a simple exercise to work out the answer for geodesics at arbitrary origins: the uniform geodesic distribution within the bottom left rectangle no longer has $\rho=1,$ but it is readily computed and will multiply $1/(pq)$ according to Lemma 1.

Not the answer you're looking for? Browse other questions tagged time-series probability correlation mathematical-statistics stochastic-processes or ask your own question.

1
Proof the increment variance of the Scaled Random Walk
5
Upper bound for the probability $P\left[\left|\frac{Y_n}{n}-p^2\right|>\varepsilon\right]$
3
What is the limiting distribution of $Y_n = \sqrt{n}(\bar{X}_n-1)$ as $n \to \infty$?
3
Cross-correlations in digit distributions
4
Probability distributions associated to the logarithm numeration system
3
Time-series Auto-Covariance vs. Stochastic Process Auto-Covariance
4
Skewness and kurtosis for $\mathrm{MA}\left(\infty\right)$ model with non-gaussian noise